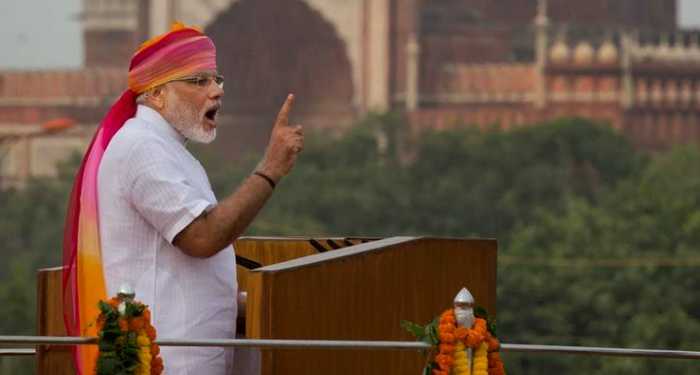 With the upcoming visit of PM Narendra Modi to Israel on July 4 much is being written about this historic feat in Jewish media. An article in an Israeli daily ‘The Marker’ described him as the world’s most important Prime Minister. The headline read, “Wake up: the most important PM of the world is coming.”

Not only this, the local Israeli newspapers and news portals have their eyes glued to the historic three-day trip of Modi. The Jerusalem Post has created a separate section (“Modi’s Visit”) where it has put up stories related to India. International Yoga Day celebrations in Israel saw massive coverage by the Israeli media.

Israel and USA share intense and close relationship but excitement of this kind was not evident even when Donald Trump visited Israel first time after becoming president. ‘The Marker’ in its story states that Modi is a leader of 1.25 billion people who enjoys massive popularity and represents one of the fastest growing economies of the world. The man of such stature deserves a lot of attention.

PM Modi is special for Israel for a number of reasons. Israel’s Prime Minister Benjamin Netanyahu hailed Modi’s visit to Israel during his opening remarks at the weekly cabinet meeting as a “very significant step” in strengthening bilateral relations.“Next week, the Indian Prime Minister, my friend, Narendra Modi will arrive in Israel. This is a historic visit to Israel. In the 70 years of the country’s existence, no Indian Prime Minister has ever visited and this is further expression of the state of Israel’s military, economic and diplomatic strength,” Netanyahu stressed.

In the 70 years of the country's existence no Indian Prime Minister has ever visited and this is further expression of Israel's strength.

We will establish a joint innovation, and R&D fund. We will also increase tourism from India to Israel; this has very great potential.

PM Modi will be received by Benjamin Netanyahu at the airport along with a “top protocol team” comprising Israelis from various fields including rabbis. Such honor is given only to Pope or US president. But what’s the reason behind this? Surely, it’s more than diplomacy.

India recognized Israel as a country but the relations between both the countries normalized in 1992. Even though, that did not result in political high level visits. Shortly after the Oslo accords were signed in September 1993, the former Israeli Prime Minister Yitzhak Rabin wanted to visit India but was cold-shouldered by Indians. Former president Shimon Peres visited India a few times but never as the Israeli president. Similarly, A P J Abdul Kalam visited Israel a few times but never as the president of India.

No defense minister has ever visited the Jewish country even though India has vast defense co-operation with them. Only three external affairs minister visited Israel in the past and of them two (Sushma Swaraj and Jaswant Singh) were of NDA governments. In September 2003, Prime Minister Atal Behari Vajpayee welcomed the then Israeli PM Ariel Sharon. Ever since then Israel has been seeking a reciprocal visit from New Delhi.

President Pranab Mukherjee’s and External Affairs Minister Sushma Swaraj’s have done the ground work for Modi’s visit. They also visited Palestine to keep a balance approach and reiterated support for the Palestine cause. But Modi’s visit is different; he would not visit Ramallah which is just a few kilometers from where he would be staying. Hence, breaking the custom followed by every Indian politician who ever visited the Jewish state. His visit would surely break the cliché of Indians treating Israel as a mistress.

Israel has lost considerable political influence in Europe. With the increase in Anti-Semitism attacks, a number of its former allies have turned hostile. France is pushing for Palestine statehood, England failed to back Israel on many international forums in recent past and Italy has also given cold shoulder. Perhaps, only Germany is the only European state that backs Israel publicly.

Countries who were once strong supporter of Israel are at the forefront of various anti-Israeli measures, boycotts, and political sanctions in various United Nations (UN) and international bodies. Israel is now working on Act East policy. It is expanding its diplomatic relations with countries (Russia, China, and India) which were unfriendly in the past.

India is one of the biggest buyer of Israeli arms which makes it next to USA in terms of its strategic importance to Israel. It is believed that Modi’s visit would further solidify security ties. Israeli defense industries have also shown interest towards participating in joint Indo-Israeli ventures to give boost to Indian government’s ‘Make in India’ campaign.

Netanyahu and Modi have met earlier in 2014 at a UN event and are said to be constantly in touch with each other over the phone. They even exchange greetings on twitter.

There are multiple deals on the card such as:

4. A joint Indo-Israel government project in the field of agriculture.

It is expected that 4,000 people of Indian-origin would be attending Modi’s address on July 5 in Tel Aviv. Both the countries are worst hit by Islamic terrorism. During 26/11 attacks terrorists also targeted Nariman House which was dwelled by a Jewish family. In the attack terrorists killed eight Israelis. Rivka and Gavriel Holtzberg were the victims of LeT terrorists at Nariman House. Fortunately, their son Moshe Holtzberg who was just two years old at that time was rescued by his Indian nanny, Sandra. PM Modi would meet Moshe in Jerusalem during his visit. It symbolizes that Israelis are not alone in their fight against terrorism and Indians share their pain.

Indo-Israeli relations are coming out of closet now. It’s time that India abdicates the Palestinian cause completely on international forums. There is nothing to gain from Palestine which shelters terror groups such as Hamas and propagates terrorism.

Modi ’s visit is a significant step but there is no scope for complacency. India and Israel have tremendous potential. The sky is the limit.