Under what circumstances would North Korea use nukes? 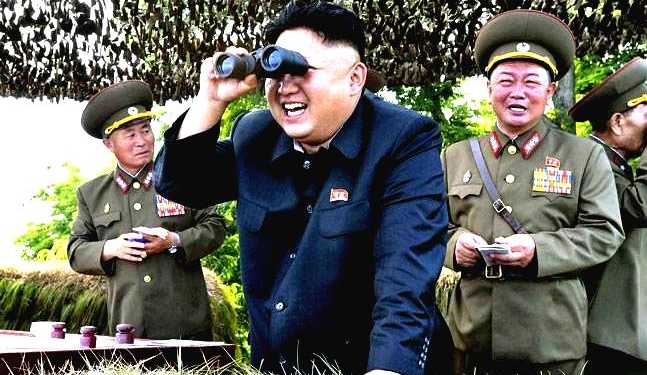 Every time Democratic People’s Republic of Korea (DPRK) tests new missile the pictures and video released by the authorities hardly change. The video is of a chubby guy whose haircut is emulated by his countrymen surrounded by comrades in army uniforms clapping synchronously giving the impression that someone has winded key of many clowns at the same time. With such perfection they show their love and gratitude to their supreme leader it’s not hard to decipher that they are brainwashed maniacs who are ready to pay their obeisance to their totalitarian master.

The Pakistan-North Korea partnership graph grew exponentially during the end of cold war. It was in 2002 when U.S. officials accused that Pakistan had exported gas centrifuges to help North Korea enrich uranium and construct a nuclear bomb. The Pakistani military officials as usual denied their involvement in supplying centrifuges. However, the report’s release did not affect or downgraded the Islamabad-Pyongyang security partnership.

Even when the whole world has put multiple sanctions on the totalitarian regime Pakistan and China share cordial relationship with North Korea.

In 2006, despite numerous sanctions by the world community, North Korea tested its first nuclear weapon. It again conducted two more successful tests in 2009 and 2013.The world community was appalled by it. It left everyone scratching their heads wondering that the nation who can’t feed its citizens was busy developing weapons of mass destruction. Unlike some nations who keep their nuclear program secret North Korea brags like a kid who gets some new toy. North Korea regularly threatens to annihilate its enemies (South Korea and U.S.) through its nuclear missiles.

North Korea which followed the USSR footsteps adopted communism after its formation fell into the vicious trap into which the most socialist states have fallen in the past. In pursuance of arms race the economic crisis has been neglected all together.

Coming back to the nuclear program lets analyze it. Everyone knows that the North Korea has at least three nuclear weapons which it tested in public display of power. Nothing can be said if it has stockpiled some nukes or not.

Even though it brags about being nuclear power, ‘rouge state’ has never made any claims about the nuclear weapons it has. Nobody outside of North Korea knows the exact figure. With deep blanket of secrecy it’s hard to estimate North Korea’s nuclear arsenal.

According to defense analysts the early North Korean weapons had faulty designs and were capable of a relatively low explosive yield. In 2008 ,North Korea declared it possess 38.5 kilograms of weapons-grade plutonium but kept its mouth shut about the highly enriched uranium (HEU) that can be used to build a nuclear weapon. If North Korea is to be believed then its Yongbyon nuclear plant was restarted in 2013 which means it has been producing fissionable material for the last two years.

But the main question is should the world fear DPRK? The simple answer is ‘No’. Its true North Korea does not have any nuclear doctrine. Under what circumstances would North Korea use nukes? Are the Pyongyang’s nukes strategic or tactical? No one can answer these questions. It’s part of Kim Jong-un’s nuclear strategy North Korea to have policy of nuclear ambiguity. There is a conception among Koreans that not understanding the terms under which North Korea will use nukes prevents any military aggression by the United States.

North Koreans regard South Korea and United States of America as their potential enemies. The bombarding of South Korea or attack on South Korea would trigger a nuclear war. But that’s the situation which Kim would definitely not want to be in. Nukes are the guarantor of the Kim’s dynasty. If he unleashes them then no one could stop North Korea turning into a barren land and reunification of Korean peninsula with complete eradication of Kim’s dynasty. So despite the entire hullabaloo there is not much to fear North Korea’s nuclear program. It’s a failed state which uses concentration camps to house its citizens who raise any dissent where they undergo torture at the hands of authorities. The world must come together and protest against the totalitarian regime in one voice. Until some countries who continue to be the biggest benefactor of terror states like Pakistan and North Korea marginalize them, it would be foolish to hope any change in status quo.

Move Over! The Apathy for Israel is Officially Obsolete

Why is this “Nehruvian” Journalist acting as a Chinese Agent?