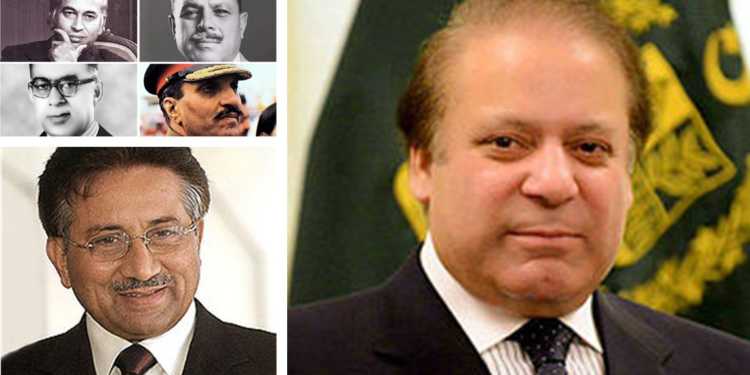 Nawaz Sharif, the tycoon and party leader who helped define a turbulent era of Pakistani politics, stepped down as prime minister on Friday after the Supreme Court ruled that corruption allegations had disqualified him.

With the partition of India, Pakistan came into existence on August 15, 1947 when Liaquat Ali Khan became the Prime Minister of the newly carved country. Four years and two months later, Liaquat Ali Khan was assassinated on October 16, 1951. Secondly Pakistan’s Supreme Court has removed the prime minister, Nawaz Sharif, from office in a unanimous verdict over corruption allegations that will further upset the country’s unstable political landscape.

Liaquat and Nawaz are the only two Prime ministers ever in 70 years of Pakistan history to have maximum number of days in office. Surprisingly No Pakistani Prime Minister has ever completed the complete tenure of 5 years.

It all started on May 01, 2017 when the sacking of Tariq Fatemi, the special assistant on foreign affairs to Pakistan’s prime minister, and the subsequent reaction from its army signal the beginning of a showdown between the civilian establishment led by Nawaz Sharif and the men in uniform, who have often shaped that country’s destiny. This was a gutsy move by Nawaz Sharif but I think he forgot that this was Pakistan and here Zia-ul-Haq removed and executed ZA Bhutto who appointed the former as the army chief by superseding seniors. Nawaz Sharif himself was removed in 1999 in a coup by (Pervez) Musharraf who was earlier appointed by superseding senior officers by Nawaz Sharif.

In reality, over the last four years, the Pakistan Army had concisely taken steps to weaken the civilian regime to the point of the latter becoming a mere rubber stamp.

The Pakistan Army has generally retained its primacy in foreign and defence policies of Pakistan. But that’s not all. While over the last few years, the Sharif government got embroiled in one political and corruption controversy after another, the Army steadfastly strengthened its grip over Pakistan’s polity, economy and society.

This was quite a change for Pakistan’s army generals, who had faced a decline in stature and influence after a series of incidents in 2011 — the Raymond Davis incident in Lahore, Osama bin Laden raid in Abbottabad and the NATO bombing of a Pakistan Army checkpost in Mohamand Agency — had raised questions over the capability of Pakistan Army to defend Pakistan’s territorial integrity and sovereignty, in essence, its existence.

But Pakistan’s then army chiefs — General Ashfaq Parvez Kayani and Raheel Sharif — managed to sail through those difficult times and revive the army’s image and standing in the eyes of the ordinary Pakistani civilian. Their efforts received a compliment with politicians getting involved in scores of allegations of corruption and nepotism.

While Nawaz Sharif ’s government managed to survive, it had to pay the price in the form of ceding space to the army on crucial policy issues including the China Pakistan Economic Corridor where Army’s Fauji Foundation is expected to mint more money than any other Pakistani business.

Those of you who would have encountered Pakistani’s on the social media will be aware that the way students are taught is part of Fauji Foundation’s propaganda. They have over 100 branches spread from Karachi to Gilgit having approx 45000 x students, 2000x teachers and over 1100x adm staff, FF Edn system is amongst the largest Edn systems in the country.The Fauji Foundation’s education system aims to provide education to the children of ex armed forces personnel, as well as to civilians.

So precisely the grip of army over the youth and teen with the help of propaganda is really very strong and that is where the civilian government loses.

The 1999 Pakistani coup d’état was a bloodless coup d’état in which the Pakistan Army and then-Chief of Army Staff and Chairman of the Joint Chiefs of Staff Committee, General Pervez Musharraf, seized the control of the civilian government of publicly elected Prime Minister Nawaz Sharif on 12 October 1999. Two days into seizing the government, on 14 October 1999, General Musharraf, who then-acted as the country’s Chief Executive, declared a state of emergency by issuing a Provisional Constitutional Order that suspended the writ of the Constitution of Pakistan.

The Supreme Court of Pakistan led by Chief Justice Saeeduzzaman Siddiqui validated the martial law in a view of “doctrine of necessity” but provided its legality only limited to three years. Meanwhile, Nawaz Sharif was trialled by the judge advocate general court and convicted him for risking the life of all the passengers on board including the sitting Chairman joint chiefs. The military court later in their findings decided that all allegations are fact based and Sharif was actually involved in aerial hijacking and it was he, who ordered, the Pakistan CAA for not letting the plane land on Pakistani soil; eventually, the judge advocate general awarding Sharif the life imprisonment but later thanks to King Abdullah of Saudi Arabi Nawaz Sharif was pardoned.

While news and social media was busy, the markets started showing jitters. In fact, ever since the investigation on Panama Papers scandal began the market took a dip of 17 per cent. The KSE-100 had already seen a lot of volatility this year, partly due to the listing of Pakistan Stock Exchange (PSX) in the MSCI Emerging Markets Index. Pakistani economy for now is being propped up by a lot of debt. Whether it was the multiple bailouts from the IMF or Chinese state-owned enterprises investing through the China-Pakistan Economic Corridor, Pakistan needs ‘at least’ 4-5 per cent of consistent GDP growth for the next two decades to tide over any possibility of a mega-default. Keeping aside the opinions on political parties, ideologies or political struggle within Pakistan, what is worrisome is that if the nominated PM, Shehbaz Sharif, faces similar scrutiny due to the Panama Papers case, In short its economical game over for Pakistan.

It’s not Nations’ Army but its Army’s nation.

The Supreme Court of Pakistan that now adjudicates on the moral fiber of the country’s leadership is also the same body that has legally sanctioned every military coup to take place in Pakistan. Judges who went against these rulings were often made to retire, while the apex court ruled in favour of removing elected governments and even sentenced one prime minister to death on the behest of a military dictator.

The ousted Nawaz Sharif, who managed to push for peace with India in spite of criticism from the military and supported the restoration of Supreme Court and lower court judges suspended by military dictators, is their latest victim as democracy struggles in Pakistan.