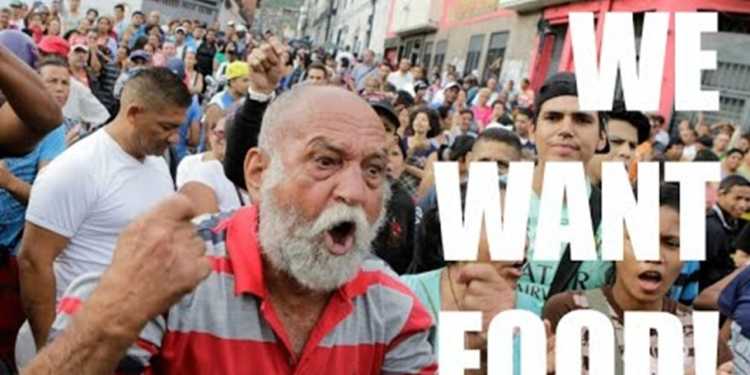 ‘Mom, I am hungry, I want to eat! Dad!’ she cried. But the kitchen was empty and her mother silent. This was not the situation of some third world country. It happened long back in Ukraine when it was part of Soviet Union in 1932.This was the situation of every household in Ukraine where people were dying just like trees shed their leaves in autumn. Everyday a cart came to village, comrades in army uniform checked houses for dead bodies, if any dead body was found then it was stacked into a sack and put in cart after which the cart disappeared. People were starving some even did not hesitate from cannibalism. There were mass graves and all of it was a result of an experiment painted by the ‘red’ color of communism. Coincidentally, red also symbolizes danger. The famine was one of the worst catastrophes in European history prior to the holocaust. It was the result of the socialist policies of Joseph Stalin who dreamt of Marxist Utopian Soviet Union. Alas, the experiment failed resulting in the death of 12 million ‘guinea pigs’.

This is not the only famine as a result of Communist policies.

After some years of the Soviet famine, the great Chinese famine captured the world’s attention. It began in late 1958 and lasted until late 1961. The Communist government blamed the cause of famine to natural disasters such as droughts, floods and typhoons. There is no doubt it was exacerbated due to the result of Chinese policies. The massive structural changes and labor redistribution of the ‘Great Leap Forward’ placed the farmers under extreme difficult situation. One of the overlooked reasons of China’s disastrous agricultural production during that period was the agronomic theory of Trofim Lysenko, a Soviet agronomist. Mao Zedong was obsessed by the ideas of Lysenko even though his theory was discarded back at his home, Soviet Union.

As ‘Marxism’ is synonymous to revolution, Lysenko had disdain for existing knowledge and favored new techniques which according to him would boost crop yield. His theories helped farmers as much as Marxism helped to eradicate inequality in the world. Most of his theories were flawed and his ‘new’ agricultural methods did not work as per the plan. The Chinese government under the leadership of Mao Zedong concealed the extent of the famine from the rest of the world. Food was scarce in cities, causing death rates in some cities to double. The government suppressed all information about the famine. Communist party propaganda posters that depicted the success of Great Leap Forward were put all over the city giving the impression that all was well. The death toll is still matter of debate, some experts put the toll around 30 million, others estimate it in the range of 10 million to as high as 47 million.
(http://alphahistory.com/chineserevolu…/great-chinesefamine/)

But, why am I telling you all this? As they say you must study history to learn from the past. In this case the latest victim of Socialism is Venezuela which is going through the period of worst economic crisis. According to Venezuelan consultancy firm ‘Ecoanalitica’, inflation was 525 percent last year. In economics this is called ‘hyperinflation’.

According to International Monetary Fund (IMF) data, last year, the country had a negative growth rate of minus 8 percent and an unemployment rate of 17 percent. It is expected to be 20 percent this year. When Hugo Chavez came to power in 1999, the oil business was booming so he lowered the price of key items such as food and medicines. Products became affordable to the poor but the flipside was they were sold below the cost of production. After the death of Chavez his successor Nicholas Maduro came to power in 2013, the oil prices have declined rapidly since 2014. The oil export which was the only source of money for Venezuela took a hit. The socialist economic system was unable to maintain the subsidies and price controls that functioned during the oil boom years. Crashing oil prices have left the government with little foreign currency to buy goods. Imports are down by 50 per cent from last year, pushing the country deeper into a hunger crisis. The situation is so grim that people are forced to search garbage cans for food. But this is not problem for Venezuelan president Nicholas Maduro; he has devised Plan Conejo or ‘Plan Rabbit’ to end hunger. In his view rabbits would be excellent source of protein for the large number of people who don’t have regular access to chicken.

As per the Venezuelan government it’s the “battle to win the economic war” waged by imperialist powers of the world such as USA.

Maduro’s cabinet would be embarking on a nationwide publicity campaign to convince Venezuelans for rabbit diet. This idea is not supported by Venezuelan citizens as rabbits are pets in many households. In Venezuela they feature as mascots for soccer teams or characters on birthday cards. Government plans to distribute rabbits in specific areas for their breeding. Now the million dollar question is “where would they get the food to feed the rabbits? If they have food by any chance, why don’t they eat themselves? Logically, the people getting rabbits would feed themselves as well as the rabbits.

In a socialist economy, the central planners decide who gets the economic output that is seize from the producers which are perceived to be ‘Capitalists’ and seen with utter hatred. Last year, “solidarity bags” of food were distributed exclusively to people who were members of the socialist party in Venezuela. The recipients of the “Plan Conejo” would be the supporters of the Nicholas Maduro. This plan of ending hunger is bound to fail as the millions who are starving and protesting on the streets represent the majority who do not back the current regime and do not have any political connections. It’s safe to assume these poor chaps would not be part of Plan Conejo.

Socialism always works in the beginning but in the long run it fails.

In words of Ayn Rand “The fallacies and contradictions in the economic theories of socialism were exposed and refuted time and time again, in the Nineteenth Century as well as today. This did not and does not stop anyone: it is not an issue of economics, but of morality. The intellectuals and the so-called idealists were determined to make socialism work. How? By that magic means of all irrationalists.”

In case you are still wondering “what happened to that girl in Ukraine?”
She died like her mother beside her.