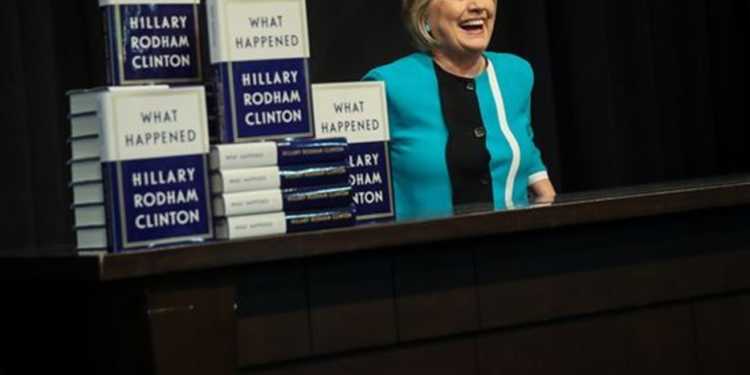 “I believe and I think the evidence shows, I would have won, “Hillary Clinton said in her recent television interview for the launch of her new book. “What Happened” : a frank assessment of 2016’s presidential campaign”. In her book, she points out all the mistakes and the reasons why she lost the 2016 election.

Putin influenced our election, and he is not exactly fond of strong women like me, Hillary commented about Russian interference in the Presidential elections. She also said Russian have pumped millions of dollars for negative marketing against her campaign.

Sexism and misogyny played a role in the 2016 presidential election. She said that women were under tremendous pressure from fathers and husbands and boyfriends and male employers not to vote for ‘the girl’. She commented that she feels sad for women who publicly support Donald Trump.

Clinton says in the book that President Obama held her back from fighting back as hard as she wanted to against Sanders during the primaries: If the claim is true, that again brings us back to Clinton’s abilities as a speaker. And when you need to fight, playing the women card and criticizing the opponents aren’t always the best weapons. President Obama did not hamper her fighting abilities, she’s never had them.

She also said that journalists cannot fathom the role they played in electing Trump from providing him free airtime to giving her emails three times more coverage than all the issues affecting people’s lives combined.” She seems to have forgotten the fact how anti Trump the media was. He won the election despite the fact everything from a kitchen sink to a Mexican wall were thrown at him by the media. All the major media networks and newspapers endorsed Hillary Clinton.

The biggest villain in Clintons book is James Comey the FBI director who had informed Congress that the F.B.I. would reopen the email investigation after discovering emails from her on a laptop belonging to Anthony Weiner, the disgraced husband of her closest aide, Huma Abedin just weeks before the election. Was this a bad joke?” she writes. “It had to be. “The FBI wasn’t the Federal Bureau of IFs or Innuendos. Its job was to find out the facts. What the hell was Comey doing?

Hillary Clinton says that she would have won the election if it wasn’t for Comey reopening the investigation. In her book she has blamed Putin & Russia, Bernie Sanders, The FBI, Wiki leaks, Donald Trump, Misogyny, Women, Journalists, her gender and even Barack Obama.

She misses out on biggest reason why she might have lost the election that reason is Hillary Clinton herself. Let’s be honest with ourselves, Hillary is neither a charismatic leader nor a terrific orator. She is in fact one of the most boring Presidential candidates ever. Bernie Sanders enjoyed success in the primaries and Donald Trump won the election because they both tapped the anger in hearts of the voter. The anger against the very establishment, Hillary Clinton represented.

Even before the election took place the media crowned her as the next President. While Trump was focusing on hectic road shows in swing states (which eventually helped him win the election) Hillary Clinton just sat at home expecting her surrogates to do her work. Instead of campaigning on what she would do for the American people, her campaign focused on ‘Trump is a misogynist’ and she never stopped playing the women card.

All this proves is that she’s got it all wrong, even after all this time. Bye Bye Hillary.