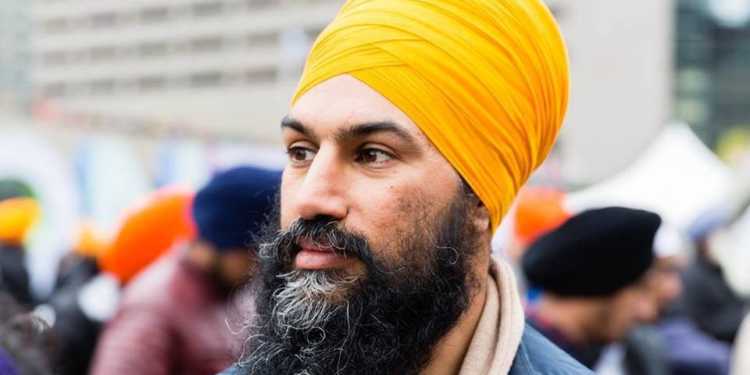 Just a month back a video of Canadian Sikh politician being heckled by a racist woman was doing the rounds on internet. The man was none other than Jagmeet Singh who was heavily praised for his calm response to the racist rants. It won many hearts and garnered a lot of attention all over the world. Now Jagmeet Singh is again in news, he has been elected as the leader of the New Democratic Party (NDP) in Canada.

Jagmeet Singh is a provincial lawmaker and the first non-white person ever to head a major party in the Canada. He was elected on the first ballot to lead the party into the 2019 election against Prime Minister Justin Trudeau‘s Liberals. He competed against three other candidates and gained 53.6 per cent votes.

After winning the election Jagmeet Singh thanked his supporters by tweeting, “Thank you, New Democrats. The run for Prime Minister begins now.” Jagmeet Singh officially announced the launch of his campaign to be the next prime minister of Canada.

His core issues are climate change, reconciliation, electoral reform and to remove children from no-fly list of Canada.

Jagmeet Singh is considered to be a strong political rival of Justin Trudeau, the prime minister of Canada.

He plans to stand against Trudeau in the 2019 elections. It would not be so easy for him as his party (New Democrats) lost 59 seats in the 2015 elections. It is currently at the third place in Canada’s Parliament with 44 of 338 seats and has never held power.

Contrary to the children of Indian immigrants who make India proud abroad the case of Jagmeet Singh is an exception. He has a history of troubled past with India because of his support for khalistani terrorists. In 2013 he was considered ‘persona non grata’ and denied the Indian visa by the UPA government. Till date he remains the only first ever sitting member of Western Legislature who is not allowed to travel India.

Jagmeet Singh has actively participated in numerous pro-khalistan movements where he criticized Indian government and has talked about the issues related to the 1984 Sikh riots. In 2016, he called the 1984 riots, “genocide”. On the occasion of Operation Blue Star’s anniversary his official statement was “The government of India initiated a genocidal campaign against the Sikh minority. The Indian military killed thousands of innocent people in just one day. This genocide continued for the next twenty years. Across Punjab, Sikh youth disappeared, torture was rampant, and Sikhs endured relentless state-sanctioned terrorism.”

Jagmeet Singh has already attracted controversy with his expression of unwillingness to condemn the practice at some Canadian gurdwaras of displaying portraits of a man considered the “mastermind” of the Air India flight 182 terrorist bombing in 1985 that claimed 329 lives.

The situation is so grim in Canada that Inderjeet Singh Reyat, the only perpetrator convicted of Kanishka Bombing in 1985 was released by Canadian authorities last year. Those of you who don’t know about Kanishka Bombing let me give a brief overview.

On June 23, 1985, a bomb exploded aboard Air India Flight 182(Emperor Kanishka), a Boeing 747 aircraft flying on the Montreal-London route, with New Delhi as the final destination. The bomb, placed in a suitcase and checked into cargo during a stopover in Vancouver, exploded over the Atlantic Ocean in Irish airspace at an altitude of 31,000 feet, killing all 329 on board — 268 Canadian citizens (many of them of Indian origin), 27 Britons and 24 Indians. Canadian and Indian investigators concluded that the bombings were planned and executed by Sikh separatists based in Canada under the instructions from Khalistani militants active in Punjab. The bombing was carried out by militant organization ‘Babbar Khalsa’ as revenge for Operation Blue Star of 1984.

This year there has been sudden resurgence in Khalistani movements across Canada.

Pro-Khalistan groups in Canada are propagating their separatist message by organizing ‘Punjab Independence 2020’ referendum campaign. Canadian Prime Minister Justin Trudeau’s presence at a Khalsa Day nagar kirtan in Toronto was also cause of concern for India, since such events are well known for having a strong Khalistani backing. When Modi met Justin Trudeau at G20 summit in Hamburg, he strongly protested and expressed disapproval of pro-khalistan groups on Canadian soil that bolster the cause of Punjab’s independence.

When Harjit Sajjan, Canadian Defense minister came on state visit to India, Captain Amrinder Singh denied to meet him alleging that he was a Kalistani sympathizer. Not only this he further alleged that there are in fact five other ministers in Trudeau’s cabinet who are Khalistani sympathizers. Captain Amrinder Singh was publicly threatened by pro-Khalistan groups and forced to cancel a scheduled seven-day trip to Canada in June last year. In May 2016, Indian Intelligence agencies alerted Canadian government of pro-Khalistan terrorists who were running a camp near Mission City in British Columbia to train militants to carry out strikes in Punjab.

Slowly and steadily Canada is turning out to be breeding ground for Khalistani sympathizers, victory of Jagmeet Singh in 2019 elections would only worsen the situation. Whether he will win or not? Only time will tell.