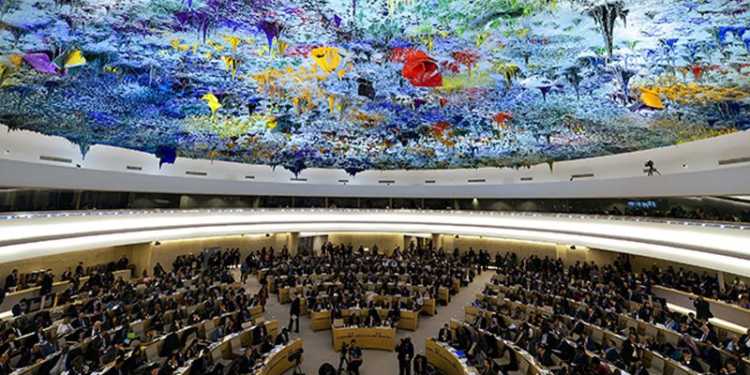 Pakistan has won a seat in United Nations Human Rights Council (UNHRC) with two third votes after a polling of 151 votes which is much more than 97 votes that were actually needed!

When India was expecting the US and the world to declare this rogue nation as a terror state, Pakistan – the hotbed of hospitality to terror outfits like LET, JEM, Taliban and the Haqqanis, being voted as one among the 47 council members of UNHRC should not come as a shock to India because there is much more oxymora to the UNHRC and Human rights when countries like Saudi Arabia and UAE can make it to the esteemed list!

So what does it essentially mean when 151 out of 193 nations vote and induct a rabidly radical dictatorial regime like Pakistan that is an illegitimate result of imperial puppeteering, into a so called intergovernmental peacekeeping organization that claims to promote and protect human rights across the world? Will Musharaf and Malala who are currently hiding in London ever be able to come back and live fearlessly in their holy paradise of peace with the new human rights crown?

How can a Pakistan that routinely violates its own people in Baluchistan and often breaks ceasefire impinging cross border terrorism ever qualify as a state, conscious of human rights? Pakistan is a nation where women have little or no legal rights and its minorities like Ahmadis, Hindus, Sikhs, Christians and Zoroastrians still face discrimination and live under the fear of archaic Islamic laws. Non-Muslims of this nation can never ascend top Government posts and the Parliament or the Prime minister is just a relic whose strings are pulled by a military that is sold out to the west. But Quid pro quo is the world order today where abusive and brutally autocratic/communist nations cling together to cover up their rotten fleshes under the crust of ‘Human Rights’!

In 1942, ‘The Four Policemen’ or ‘The four Shariefs’ as they called themselves, the four major global powers then namely the US – a Democracy, Britain – a colonial power, USSR – capitalists and China – communists came together to take control of the world and ensure an enforced disarmament of aggressor states after World War II.  The proposal was for international governance by the big four where they would by inspection ensure that no other smaller powers would build military forces. Although Churchill was reluctant to take in China, Roosevelt convinced Churchill that having a pro-American China on their side would benefit them in the event of Americans, Soviets and Chinese coming together to occupy Japan and Korea and Roosevelt was confident that in the event of any serious conflict of policies with the Soviets, the Chinese would go against the Soviets but never against Americans and that China would always be a useful police against Japan. Thus China made it to the Big Four and the term ‘United Nations’ was coined, and the universal declaration of the UN came into being. Incidentally it was Winston Churchill along with Franklin Roosevelt who conceptualized and wrote the UN Declaration.

Although this idea of establishing an international table to resolve matters of aggression by one nation against another was already on cards much before the Second World War, the Big Four or the Future Policemen were determined to take it to a conclusion only after the war was over so as to achieve their global power equations. Hence the Four Policemen came up with a power solidarity plan where the Big Four would be permanent members of UN Security Council and awarded themselves with UN Security Council Veto Power that would always safeguard their own interests. So it was always about safeguarding their own interests much against the hype of Human Rights for all!

In 1946, after the Second World War, after much bloodshed, mockery and abuse of human lives at the hands of these very warring forces, the Big Four founded the United Nations Commission For Human Rights to safeguard human rights of those very humans whom they brutalized – conquered – subjugated – this time they wanted to promote world peace! But peace for weaker nations comes with a price – the price of pledging decision making powers and resources at the altar of the nexus of world powerhouses lest you face sanctions of all kinds where one can be damned till they are doomed for not toeing the lines. It is for this reason that today although the US and Russia together hold more than 90% of nuclear warheads in the world it is India that is intolerant and communal and North Korea is the newest bad boy in town! Remember Saddam Hussain and Gaddafi? Yes they were bad boys too and their lands unwashed pig sties until the US cleansed it all with their puritanically interventionist long imperial noses!! It is completely another thing that the US did support Saddam during the Iran-Iraq war to keep a check on Iran but when it comes to their economic interests, truly there are no permanent friends or foes in geopolitics.

However the UNCHR in its long stint from 1946-2006 emerged out to be an indecisive, corrupt and toothless organization that was hijacked by global political interests than for its intrinsic cause of Human Rights. Be it in Somalia, Haiti, Mozambique or Yugoslavia or the Rwandan genocide, the UN mission failed to do much, intervene or restore peace. The invasion of Afghanistan in 2001 and the Iraq War were hallmarks of UNCHR’s inefficiency hence in 2006 the UNCHR was resurrected as UNHRC which is again a part of the UN body whose founding fathers Winston Churchill and Franklin Roosevelt were instrumental in engineering the Bengal Famine of 1943 and dropping a nuclear bomb on Japan. If one looks closely at the achievements of UNHRC from 2006 onwards too, nothing significant has been achieved other than discussing Israel-Palestine issue. Even the Kashmir issue has been deliberately kept alive from decades together that makes the UNHRC seem like an Indian court where people haggle around for decades to get justice!

The preying pattern remains the same where mineral rich countries are led into civil wars, peasants are plucked out of agriculture, food grains are hoarded, then a catastrophic famine happens giving rise to militia groups, mass starvations, plaguing epidemics, rise of rebel groups and then some organization called North East Front or a Liberation Congress Front or something to that extent comes up, don’t ask who props up these organizations and supplies arms and arsenal in a starving nation! Then the local regime is systematically thrown out and the whole country plunges into a humanitarian crisis because the ruler is ruthless and has failed its people, the economy is ironed out on the floor and then the holy cows have to intervene and provide humanitarian aid, health care! The local population will suddenly adopt radical Islam and then they are again run down by some peaceful truck or struck by rebellious rifles or beheaded by ISIS, last but not the least there is this astute grace of refugees too for which the UNHRC raises obnoxious amount of funds! It is a strange world today where nations that were stricken in famine and civil wars have to beseech Human Rights from these very famine and war engineers.

While ISIS is known as a terror factory for all its beheadings, technically there is not much difference between the diktats of a Saudi Arabia or ISIS but then Saudi under British laid paths must be an exemplary enigma of Human rights and peacekeeping that has made it to the UNHRC list as a member!

Members to the UNHRC are elected by UNGA (United Nations General Assembly) based on the candidate state’s contribution to the protection and promotion of human rights. Pakistan has definitely contributed to the protection and promotion of US, UK, Russian and Chinese interests and hence the Big Four along with their subordinate allies who continue to police the world seem to have made a token acknowledge of Pakistan’s diligent contributions!

Although the idea of an international discussion platform has been well received and supported for amicable world sustenance, power politics has often corrupted and corroded the cause where treading into the UN Chakravyooha is something that every nation is forced to partake today. Many Abhimanyus have made an entry just like Pakistan but the larger speculation is never about Pakistan but about India, will India emerge the Krishna and walk out with a Security Council Seat, will it resolve the Kashmir crisis on its own, is what is more intriguing.

Until then India should steer clear of these western mind games without dipping her spirits and continue to focus on her economic growth and strengthen her military forces which should someday enable her to perhaps conceptualize an indigenous ‘Indian International Human Rights Council’ that can advise and intervene with Dharmic precepts to the globe across with a guarantee that she will not usurp native resources or be an abusive rifle wielding interventionist because it is more about us humans than the rhetoric of any rights!