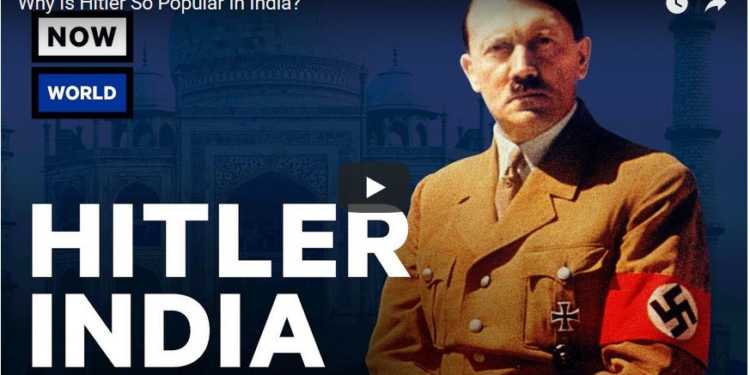 On Monday the 23rd, I was recommended a video by a friend by one Jules Suzdaltsev on YouTube. I was mildly curious and a bit amused when I read the title of the video, “Why is Hitler so Popular in India?” Because frankly, it was news to me. A quick Google search told me that Jules Suzdaltsev is a journalist and a contributor at VICE. I found myself thinking, “Now isn’t that surprising?” For such a short video, it is just 3 minutes and 4 seconds, it does contain a disproportionate amount of ignorance. And 226,201 views when I saw it. Assuming the overwhelming majority of the viewers are Europeans or Americans, that’s a lot of people who have been led to believe India, by and large, have a favorable view of the German Dictator.

The theme of the video itself is based on a rather unverified and misguided assumption. Its core assumption is that Hitler is Popular in India. And the rest of video attempted to explain why it was the case. The rather biased assumption was based on the fact that there was one clothes store that named itself Hitler and another Café that named itself after the Nazi leader. Well, hundreds and thousands of Islamic terrorists don’t represent Islam but the owners of one shop and one café indicate the views of over a billion Indians. Well, sure.

One more reason that is cited as an affirmation Hitler’s apparent popularity in India is his autobiography, Mein Kampf’s bestseller status in India. Perhaps he should know that by January 3, 2017, just 2 days over a year since Mein Kampf entered the public domain in Germany on the 1st of Jan, 2016, over 85000 copies of the book were sold. Under such circumstances, Jules Suzdaltsev should be more concerned about the apparent widespread popularity of Hitler in Germany than in India.

Jules Suzdaltsev is not the only person who uses Mein Kampf ’s bestseller status in India to peddle the narrative about Hitler ’s apparent popularity here.

There are a slew of articles written on the topic. “Hitler is a Rock Star in South Asia” by VICE again, “Hitler has a following in India” by Bloomberg, “Hitler’s hot in India” by NPR and so and so. And most of these cite the same reason to reach the same dubious conclusion. But then, they’re written by journalists and journalists are not really famous for their high intellect. Some of these articles also try to link the reasons behind Narendra Modi’s immense popularity with that of Hitler’s, albeit rather subtly but not subtly enough to escape one’s notice.

At one point, the journalist in the video laments the fact that the Holocaust is not taught in great detail in our schools. Perhaps he can take some consolation from the fact that our schools do not even talk about the Hindu genocide at the hands of Islamic invaders as well, in fact, there is an outright denial of it. But jokes apart, it is only to be expected that the Holocaust is not given disproportionate space in our school curriculum. Because first and foremost, there are more important things we need to teach our children about. The 1930s and 1940s were a momentous period in the history of our nation. We have our own story to tell and our own heroes and our own villains and our children need to learn those first. We cannot afford to go out of our way to make additional space for an event that Europeans consider to be of paramount importance just because they deem themselves the center of the Universe.

The journalist then says that for Indians, Winston Churchill is much more of a villain than Adolf Hitler. Then he goes to on add that it is because Churchill is ‘blamed’ for the deaths of around 4 million people during the Bengal famine. Through the usage of the word ‘blamed’, Suzdaltsev seems to make the implication that Churchill was in fact NOT guilty of genocide. I think the rather interesting thing to be remarked upon here is the Westerner’s remarkable ability to obsess about one genocidal dictator’s alleged popularity in India while simultaneously treating the glorification of a man responsible for the deaths of 4 million Indians as something completely natural.

The most obnoxious part of the video came at 1:33 where a photo of the gates of a Temple with Lord Ganesha on it with a Hindu Swastika on his right and left is displayed on the screen. What is an image of Lord Ganesha with Swastikas doing on a video about Adolf Hitler? Such subtle Hindu Phobia is mainstream in the West. Not long ago, there was a proposal by Germany to ban the display of Swastikas across the European Union. And when it was rejected, the BBC had reported the event with the headline, “EU-wide Nazi symbols ban rejected”. It is not surprising that journalists at a media organization as reputed as the BBC do not have the minimum intellect necessary to differentiate between the Nazi symbol and the Hindu Swastika, journalists in the West generally tend to be extremely stupid. They cannot even differentiate between a Sikh and a Muslim.

However, one needs to mention that Jules Suzdaltev does clarify towards the end that Indians do not harbor any form of anti-semitism at all. Thank the Gods for small mercies. Historically, India has been the home to persecuted Jews since centuries. And they have thrived here without any persecution. It is rather difficult for the Westerners to imagine that people from other parts of the world could be really apathetic about their struggles and their history. Even with regards to the Holocaust, Westerners find it rather difficult to grasp that Indians by and large are not emotionally invested with the events of the Tragedy.

And really, why should Indians be? We witnessed a very bloody Civil War and a subsequent partition around the same time and for us, it left a deeper scar than any gruesome event in some distant land. Tragedies experienced always leave greater scars than those one hears about and Tragedies that befall our dear and loved ones leave a greater impression and inspire greater emotions than those that befall faces that we have never ever known. And thus it is with Hitler, our apathy and minor transgressions that are borne of that apathy are mistaken for signs of popularity by overenthusiastic Westerners who take it for granted that every individual on Earth, from the starving regions in Africa to the remote villages in India where even electricity has not reached, absolutely hates Hitler and loathes him and lives under the delusion that anything short of that is a sign of approval for the Dictator.