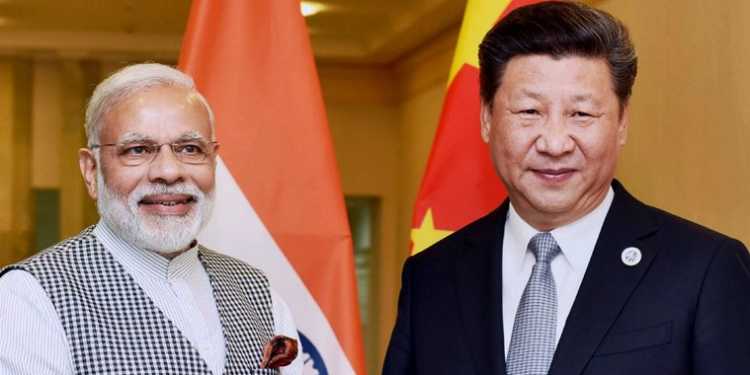 Tashkent : Prime Minister Narendra Modi with Chinese President Xi Jinping during a meeting in Tashkent on Thursday on the sidelines of SCO Summit. PTI Photo (PTI6_23_2016_000094B)

The scorching summer in China would have faded early but Beijing was caught in a severe political heat till this mid-week. They had the most significant, a week-long, high-profile political rendezvous, which rolled out a blueprint of its national polices and shaped many major political decisions that would decide the future of the country and its entire political dispensation. As one may wonder, this wasn’t a parliamentary committee or a cabinet meet, this was the 19th National Congress of Communist Party of China, the event which caught the eye-balls of many world powers.

The summit was attended by almost 2000+ Party members from various provinces. As per the stipulated rules, these delegates chose a new Central Committee. Out of this committee, members with full voting rights elected the new Politburo and its 7 member powerful standing committee. Xi Jinping, who held various portfolios and hailed as the most powerful leader had been the centre of attention throughout the event. He is the current General Secretary of the Communist Party of China, President of the People’s Republic of China, and Chairman of the Central Military Commission which makes him an invincible force within the party and also in the country.

Before the event, Australia’s former Prime Minister Kevin Rudd said “the fanfare around China’s leader suggested Xi, who took power in 2012 and had been expected to step down in 2022, would in fact rule well into the next decade. Five years ago I said he would be China’s most powerful leader since Deng Xiaoping. I was wrong. He is now China’s most powerful leader since Mao Zedong”

Rudd’s words seems to have turned golden. The summit ended after a week long huddle with the members voting unanimously for Xi Jinping and in a jolting move they have enshrined his name and ideology into the party’s constitution. Until the start of this Congress, only two leaders had their names inscribed in the constitution- Mao Zedong & Deng Xiaopin. The mentions were for “Mao Zedong Thought” and “Deng Xiaoping Theory” respectively. Also, Xi dwelling in his seamless authority appears to have tapped the opportunity to install loyalists in the top ranks as majority of the Politburo members retired owing to the age criteria set by the Party Constitution. The 5 new faces (all in their early 60’s) inducted in the the 7 member standing committee, clearly sends out a message that Xi has not let any heir apparent to him as the members are bound to retire at the threshold of 68 years. This fuel suspicion about his intention to remain in power well into the next decade. The 19th Congress turned out be a clear indication of the extend to which Xi has bolstered his grip on power. With his name enshrined on the constitution, any dissent towards Xi will be seen as a threat to the Communist Party rule, henceforth. This spells out China’s march towards a total dictatorship rule in the coming years.

Road to the power threshold

Though the political weight of China is reposed on a single pole, the saga of political power struggle is not distinct from other democratic countries. Various factions within the Communist Party are always at loggerheads in inducting supporters and kicking rivals out. Xi, in his run towards his ambitions has clenched to the most populist weapon – The Anti-corruption campaign. Since assuming power in 2012, he has ideated a national rejuvenation program called the “Chinese dream”, under which a strong crack down over corruption had been unleashed. Several village-level officials to high-ranking officials have been the victim of this severe crackdown. Xi, has cleverly used the anti corruption campaign to his advantage by crushing his rivals and dissenters to a greater extend and further consolidating his power in the political arena. Internet censorship and curbs on free speech had further catalyzed the authoritarian tendency that Xi had in stock for China. Also, his position as Chairman of the Central Military Commission had emboldened his authority over his dissenters.

Since the beginning of his tenure, Xi had given special emphasis on a stronger military. China’s growing influence on the disputed South China Sea under Xi, is a matter of grave concern for world powers as much is at stake at this junction for many countries. If things go as planned by Xi, the world would see a paradigm power shift in the global stage. A brittle US administration which is diplomatically unpredictable in his recent times appears to make this transition smoother than envisaged. Trump’s recent decision to pull out of the Paris climate agreement and the break neck speed at which China sprung into action to fill the void left by the world’s largest economy shows the extend to which China can rise to shed its reservation towards international affairs. China’s transformation as a global leader is no more a fantasy rather it’s a dream that could come true, if the cards are played with precision.

How should India view Xi’s rise.

An authoritarian emperor at the backyard, who is ambitious of expanding his territory locked with power dimension is always a matter of worry for India. To add color to this perception, China have had displayed its rogue behavior to outstretch its expansionist policy in the region. However, under Modi regime India seems to have rejuvenated its foreign policy to a commendable level. Modi’s foreign policy cannot be simplified to a lone aggressive one but of a trenchant combination of Aggression, Bonhomie and Maturity. India under Modi had well played its diplomatic cards in building a positive relationship with the world powers while maintaining a stern vigil to Chinese ploys and belligerence. The recent stand off between India and China at the Doklam plateau which extended beyond a month, and filled with Chinese browbeat, couldn’t subjugate the spirit of India. India held its firm stand in the region inspite of the continued war mongering from Beijing. This clearly indicates that Modi is in no mood to yield for Chinese pressure.

A few eye brows would be raised, if I am to say 2019 election will be critical for India in this aspect. If Modi has to step down as his critics dream, it would offer a chance to Rahul Gandhi to become the next PM of India. It’s over-optimistic to believe a person who can’t reign on his own thoughts, could reign over the next door dictator. Xi Jinping could well make India his next playing field with a feeble Rahul at the helm. Hence, a huge responsibility lies with Modi to retain the power in 2019 to ensure that the country’s interests are safeguarded. Stepping up the economic growth, strengthening Make in India initiative and becoming a responsible leader in the Asian pacific region are vital steps which Modi should keep an eye out for, in tackling the growing Chinese threat in our neighborhood.

India’s Time Has Arrived: Best Opportunity for us to Claim our Position as The Regional Superpower