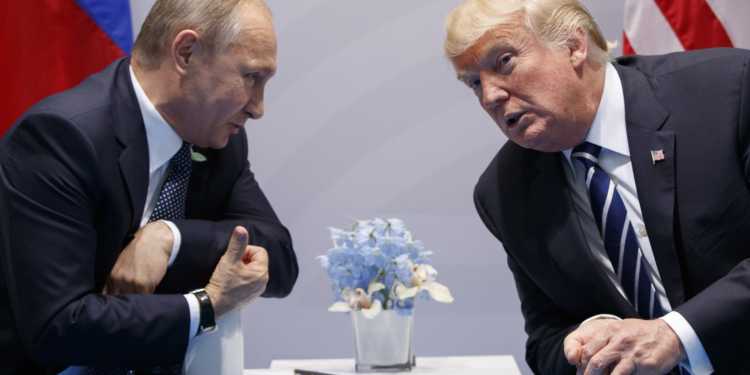 The dust of Russian influence in US 2016 presidential elections had not been settled, yet, another storm brewed when Kremlin accused Washington of interfering in upcoming Russian presidential elections on 18 March. Putin got the chance to turn guns back on United States when US treasury department released a list of influential 114 government officials and 96 business executives (most of them are Russian oligarchs) who are close to President Vladimir Putin.

The report advocates sanctions on these people. Russia and sanctions have a long history; United States first imposed penalties in response to Russia’s annexation of Ukraine’s southern Crimea peninsula in March 2014 after an unrecognized referendum on self-determination. With the help of European Union, the US later extended sanctions over Russia’s role in the conflict in eastern Ukraine, which has claimed more than 10,000 lives. Russia always denies sending troops and arming separatist rebels, but it accepts Russian volunteers have been helping Ukrainian rebels.

Recently, the US treasury imposed additional sanctions against 21 individuals and 19 individuals in connection with the Ukrainian crisis. However, this time the publication of list containing close aides of Putin himself is part of the Congress-mandated retaliation, approved reluctantly by President Donald Trump, for alleged Russian meddling in the US presidential vote. The list appears have been copied and pasted from two sources widely available to the public: the Forbes rankings of the wealthiest Russians and the Kremlin’s directory of officials, which is available on its English-language website.

The 96 business executives listed by the Treasury Department are the same as those indicated to have a net worth of more than $1 billion, according to Forbes. Among the men listed are czars of football clubs, Roman Abramovich, owner of Chelsea football club and Alisher Usmanov, who owns a large stake in Arsenal. In near future those named will not face immediate US sanctions, such as visa bans or asset freezes their inclusion on the list is likely to complicate their dealings with United States and European banks.

After the release of the list while speaking at a campaign event in Moscow, Vladimir Putin joked that he felt “slighted” that he himself was not on the list. He described the list as a “hostile step” but said Moscow does not want to make the situation worse and is eager to “develop the relations as much as our American counterparts are willing to.”

“The importance of this list is null,” said Russian Prime Minister Dmitry Medvedev, who is also one of the listed personnel. He also joked: “I believe in this case not being included on this list provides grounds for resignation.” Dmitry Peskov who is Kremlin’s spokesperson and is himself listed in the report said the US report was a “direct and obvious attempt to influence the electionsin Russia”.

However, in his view the list would not affect the vote at all, no matter how much US tries to manipulate. As the oligarchs have considerable influence in Russia the Russian government has pledged to help limit any damage to Russian oligarchs and businesses those who are listed.

Putin is seen as the clear favorite to win the March elections in Russia. To make the path to victory easy his main opposition rival, Alexei Navalny, has been barred from standing in the presidential elections. He welcomed the list, which he said included a number of figures that he had previously accused of high-level corruption. “We are pleased that they have been recognized as crooks and thieves at an international level,” he wrote on Twitter. But he also questioned why some Russian businessmen with no apparent ties to the Russian government, such as Arkady Volozh, founder and CEO of the search engine Yandex, were included in the same league of corrupt oligarchs.

The oligarchs have thrived under Putin but now they are having troubles abroad. Closeness to Putin, which used to be considered most important for capital growth in the Russian oligarchic system, is now becoming a considerable risk. Last year, Russian oligarch and Senator Suleiman Kerimov, whose net worth is around $6.3bn was arrested in France as he was accused of money laundering. Gennady Timchenko (net worth of $16bn), a close friend of Vladimir Putin, and owner of Novatek, is already victim of US sanctions. Lukoil, Russia’s largest private oil company, owned by Vagit Alekperov whose net worth is of $14.5bn and Leonid Fedun, whose net worth is of $6.3bn, were already sanctioned by the United States and European Union last year.

An investigation revealed that oligarch Mikhail Prokhorov , with a net worth of $8.9bn, had 23 accounts in the Cyprus branch of the now closed FBME (Federal Bank of the Middle East) bank. The bank lost its license and the accounts of its clients were frozen after the United States accused it of facilitating money laundering.

Earlier, Putin was least concerned for the effect of his actions (annexation of Crimea) on the international scene. The Kremlin was not ready to bow before Washington despite international pressure from all corners. It send its troops to Ukraine and Syria, allegedly tried to interfere in US Presidential elections through hackers, and even tried to organize a coup in Montenegro to prevent the Balkan country from joining NATO. Initially, the reaction of the West was slow, but it seems to be gaining momentum. The latest list by US treasury is a way of threatening the oligarchs.

Today, the future of the Russian gas pipeline project to Europe, ‘Nordstream 2’ (that is planned to be built across the Baltic Sea, from Russia to Germany), is also in doldrums, as its European partners are pulling away because of sanctions on Russia. The economic and political sanctions would play vital role in Russian elections because they would help in projecting United States as an enemy. Without an enemy in the West, Putin would lose a lot of his domestic legacy and he can’t afford to lose that. The economic situation in Russia has worsened after the sanctions were imposed in 2014. It’s the atmosphere of uncertainty that makes sanctions such a powerful weapon. Putin himself loves using uncertainty to control the Russian elite but now US is trying to play his game. The game has just begun but who will win it is too complex to predict.