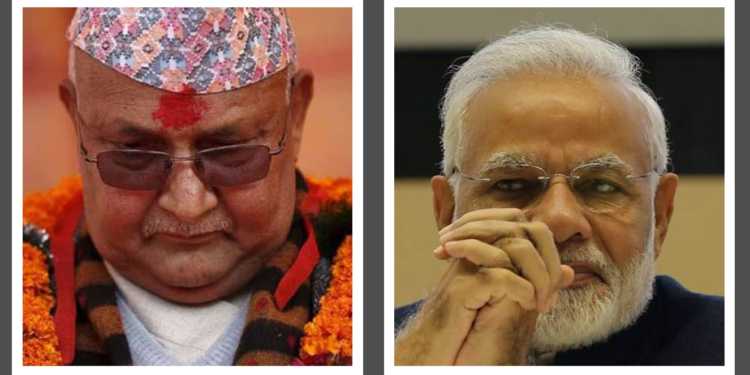 The 3 day visit of Nepalese PM Khadga Prasad Oli starts from today the 6th of April. This important India visit by the Nepalese PM Oli after a long gap of 3 years will be closely monitored by China. A lot of balancing acts and diplomatic formalities will take place. The reasons are simple; India tacitly helped the Madheshi blockade movement which led to PM Oli’s resignation from his 1st stint as the Prime Minister on 24th of July, 2016. India’s anti-Oli stand was not entirely uncalled for. With his tendencies of leaning towards China and exclusion of Madheshi community in the new Constitution drafted by Oli’s government, India’s interests were jeopardized. PM Oli’s background as the Chairman of Communist Party of Nepal (Unified Marxist-Leninist) ensured his pro-China stances were not well received by the government of India.

KP Oli’s re-election as the PM of Nepal in 2018 was a major turning point in the Indo-Nepalese relations. Warm approach was taken by the Indian government in congratulating Oli on the start of his 2nd term as Nepalese PM. India realized the importance of having its close neighbours and long time allies back again in their fold, and so did Nepal. The first India visit of the Nepalese PM with 53 delegates will be important in determining the course of Indo-Nepal ties in the years to come.  This India visit will include the laying of the foundation stone for the $1.5 billion, 900 MW Arun 3 hydro-electric project in the Sankhuwasabha district of eastern Nepal. This project, being built by the Sutlej Jal Vidyut Nigam (SVJN), will produce hydro electric power, a large share of which will be bought back by India.

But, while everything seems great and fine on the surface, there will be a couple of issues waiting for the Nepalese PM Oli and his delegation on their visit to the Indian capital. The biggest one is, Oli’s close ties with China and his support to Maoists. The construction of the $2.5 billion Budhi Gandaki project in central-western Nepal on the Gandak River will be another key point. The dam construction project was awarded to China’s Gezhouba Group in June 2017 by Pushpa Kamal Dahal ‘Prachanda’, the then Nepalese PM Oli. His successor Sher Bahadur Deuba had cancelled the dam project given to the Chinese company in November 2017. But with KP Oli’s party winning majority seats in the 2018 elections talks about reviving the project have resurfaced.

“Political prejudice or pressure from rival companies may have been instrumental in scrapping the project. But for us, hydro-power is a main focus area and come what may, we will revive the Budhi Gandaki project,” Oli was quoted saying to the South China Morning Post. This project could prove to be a bone of contention between the South Asian neighbours. India has tried persistently to counter the encroachment of China around its neighbourhood. The increasing influence of China around its border countries is worrisome for Indian government. Nepal needs to understand the hidden motives behind China’s interest, especially since the long, treacherous terrain between Nepalese and Chinese borders makes it difficult to transmit energy back to China.

According to the talks happening in the official circles in New Delhi, Indian government will make their intentions of not buying electricity from the Chinese project known to the Nepalese PM Oli. New Delhi’s stand is clear, either include Indian public and private companies and we will buy the electricity or you are free to use it for yourselves or you can sell it back to China. The latest dam project given to the Chinese Three Gorges Corporation will also be discussed in the course of his India visit.

We hope that the relations between the two countries improve. But we would like to urge the Indian government to maintain its stand and not go easy on issues which could affect India in the long term. The Nepalese government should take lessons from the sufferings of Sri Lanka and Pakistan meted out by the Chinese. Realizing the benefits and importance of India’s support and friendship should be a priority for our Northern neighbours.