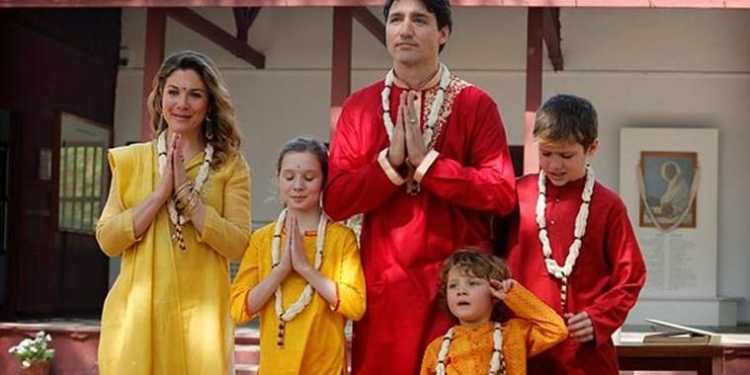 Canadian Prime Minister Justin Trudeau has admitted at a press gallery dinner that his India trip was an absolute disaster. Ordinary Indians as well as the media strongly criticised Justin Trudeau for his choice of attire and his blatant support of Khalistani elements. The biggest snub for Justin Trudeau was not being received by PM Modi upon his arrival, as is customary practice for heads of state.

Justin Trudeau’s greatest and perhaps only assets are his PR antics and appeasement efforts, whether it be the attempt to woo the Sikh community back home in Canada by sympathising with an outdated separatist movement, or the attempt to woo Indians with his extravagant and cringy choice of attire upon his visit to the Taj Mahal. Again, as is custom, CM Yogi Adityanath did not accompany Justin Trudeau and his family to Agra for the tour of the Taj Mahal.

Justin Trudeau is the embodiment of every modern 21st century liberal characteristic, from his aggressive political correctness, down to the blatant appointment of a Khalistani supporter in his cabinet for ‘inclusiveness’. He resembles the social justice warrior of the world leaders today, and employs the same tactics when it comes to running his nation or conducting international relations. This is why, the prior trips to the US and UK worked well for Justin Trudeau, since his brand of liberalism and social justice is shared by many among the common populous of these two nations. He subsequently received a lot of positive press during and in the aftermath of these foreign trips. His subsequent trip to India was exactly to the contrary, and might do down as his Waterloo moment.

The Canadian Prime Minister tried very hard to brush aside the embarrassment of the trip. “We didn’t go to India…I don’t remember the India trip,” Trudeau said as he compared the experience to the pain caused by “the ripping off of a band-aid”.

“The beginning of the end,” Trudeau termed the visit as he proceeded to show an inverted map of India to signify the topsy-turvy trip.
“Here I am. Meeting with the CEO of Infosys. A company that for the record announced new investments in Canada, during the course of this trip,” he said as he presented a photo of him shaking hands with Parekh.
“But you guys (journalists) didn’t report on it because I was wearing a shirt and tie. Boring!” he exclaimed.

Had someone like Donald Trump said the above, the entire Twitterati as well as mainstream media would have descended down to ridicule him.

The biggest controversy came when the Canadian Prime Minister’s wife, Sophie Grégoire Trudeau, was pictured with a convicted Khalistani terrorist, Jaspal Atwal, at a dinner event in Mumbai. The picture had become headlines across several newspapers in India and had caused quite a bit of outrage for a such a blatant show of support for an enemy of the state. During the press gallery dinner, however, Atwal was very conveniently cropped out.

The press gallery dinner was another one of Trudeau’s atypical PR gaffes, where he was attempting to brush aside perhaps one of the most embarrassing foreign visits of the twentieth century with the use of bad and cringy humour. Nonetheless, the domestic ridiculing of Justin Trudeau had ripple effects in Canada as well, and as a result his ratings back home have also fallen. The expose of a pretentious world leader masquerading as the voice of ‘open minded people’ is something Indians should be proud of taking credit for. His humiliation during and after the India trip should serve as a warning to other ‘budding young leaders’ both home and abroad (read Rahul Gandhi), that these feeble attempts to win over people through shallow PR antics will backfire. Moreover, he should also serve as an example to ‘intellectuals’ here at home that siding with the enemy will have consequences. We at Rightlog/TFI are more than happy with whatever little we could do for this noble deed.