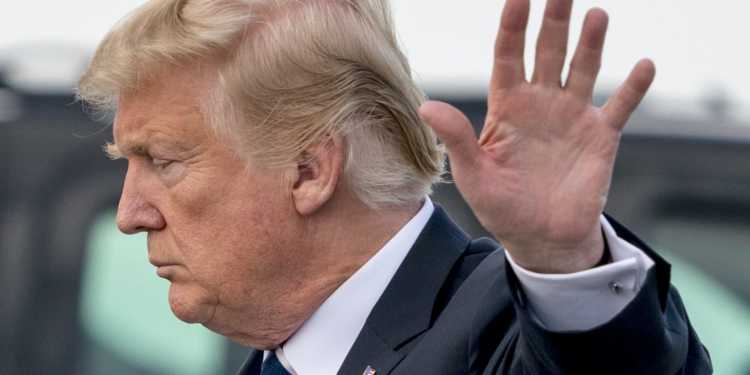 US president Donald Trump has created an image for himself. He is the kind of leader who doesn’t worry much about what the entire human rights and pseudo liberal mafia thinks about him. He goes about doing what he does without caring for the kind of opinions that are being generated against him. His “zero tolerance policy” at the US border targeted at illegal immigration is currently at the target of such vested interests that have gone all out attacking the Trump administration for such a policy.

Several American media outlets including the CNN which have been at loggerheads with the US president have been extensively reporting on all the criticism surrounding the “zero tolerance policy” around the US border. It is being alleged that the tough American policy against illegal immigration has been resulting in the separation of undocumented parents from their children. Since late April the Trump administration has been pursuing this policy whereby every immigrant arrested for crossing the border is referred for federal prosecution. Such prosecutions have the effect of separating the children from their parents. According to Department of Homeland Security’s spokesman Jonathan Hoffman, the present administration has decided to charge every adult crossing the border illegally with federal crimes, as opposed to referring those with children mainly to immigration courts, as previous administrations did. Those arrested are transferred to the custody of the Department of Justice and are presented before a judge for entering into the United States illegally. As a part of this procedure, the children of the arrested immigrants are sent to the US Department of Health and Human Services, Office of Refugee Resettlement. There has been avoidable outrage over the issue and the Trump administration is being increasingly pressurised to change this policy. The government is charging the parents under the criminal justice system and therefore children are separated from their parents.

While certain biased sections of the American mainstream media have been claiming that the zero-tolerance policy is allegedly inhuman in character and has been initiated by the Trump administration with malicious intent However, as a matter of fact, even the Obama administration had been criticised for following a tough policy against illegal immigration. In fact, the outrage over how to handle minors among illegal immigrants is hardly new. The Obama administration had actually expanded the system of detaining families after a huge surge of illegal immigrants across the US-Mexican border in 2014. Even then, many human rights groups and news channels had cried foul against the tough American policy. At that time, the officials argued that they have no choice but to deter families that were entering the United States illegally. Attorney General Jeff Sessions has also come down heavily on critics who fault the Trump administration for separation of illegal immigrant families at the border, and stated that Obama administration’s policies are partially to be blamed for it. He also clarified that they are only enforcing the law and there is nothing condemnable about it. He added that it is wrong to say that children are being abused or kept in inhumane conditions when a billion dollars were spent for taking care of children caught crossing the border.

Donald Trump has hit back at his critics who had been arguing that the administration must go soft on illegal immigrants. He has made it clear that the United States “will not be a migrant camp” on his watch. It is clear that Donald Trump does not care much for all the propaganda and falsehoods against his administration. Homeland Security Secretary Kirstjen Nielsen also made it clear that Homeland Security will not apologise for the job that it does or for the job that law enforcement does. He made it clear that this is what the American citizens want them to do. It is clear that there is nothing inherently inhumane about the policy; the Donald Trump administration is basically enforcing the law in its true spirit. The illegal immigrants cannot be allowed to use their minor children as a cover against law enforcement and prosecution. Separation of children from their parents, however undesirable, is essentially a consequence of law enforcement against illegal immigration by the present administration.