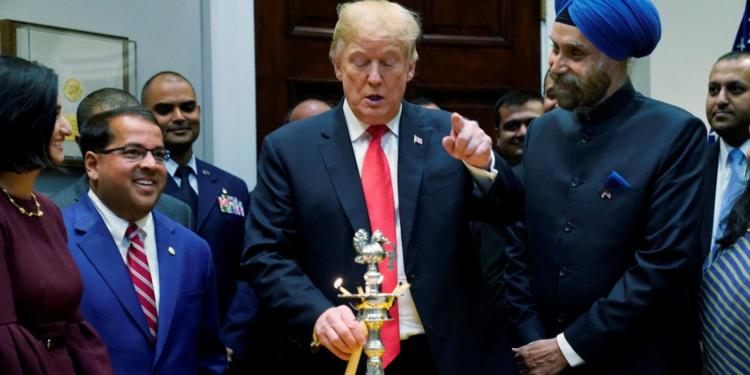 In an unprecedented event at the White House, American president Donald Trump lighted Diya in the presence of Indian Ambassador Navtej Sarna and extolled India as a ‘very good negotiator’. He extended his warm greetings to Indian- Americans and complimented Indian trade negotiators as one of the best.

“The United States has deep ties to the nation of India, and I am grateful for my friendship with Prime Minister Modi. We’re trying very hard to make better trade deals with India, but they’re very good traders. They’re very good negotiators, you would say, right? The best. So we’re working, and it’s moving along,” said Trump before lighting the ceremonial Diya in the historic Roosevelt Room of the White House.

Trump further said, “India is the world’s largest democracy, and the relationship between our two countries can act as a bulwark for freedom, prosperity, and peace”. Trump repeatedly spoke about his close ties with PM Narendra Modi and called him a great friend.”

These comments from Trump are significant as these are made at a time when world is reeling under trade-war. The trade feud between Canada and the US has escalated just after Trump became president. Donald Trump has imposed tariffs on steel and aluminum imports from EU, antagonized Western allies at the G7 summit in Canada this month, and ignored European attempts to persuade him not to pull out of the Iran nuclear deal. During his election campaign Trump had vowed to “Make America Great Again”.

Trump is on a spree to revise the deals negotiated and signed by the previous dispensations terming them ‘unfavorable to America’. This spree has resulted in tussles with several allies and  even threats to leave United Nations Organisation.

Trump has made the US trade-deficit a focus of his presidency. He has imposed taxes on a range of Chinese imports, threatened other countries over trade and renegotiated trade agreements which were fixed by the former administration. Last year, the total value of trade in goods and services between India and the US stood at USD 126.2 billion and the US ran a USD 27.3 billion deficit.

On Wednesday, on the sidelines of the ASEAN summit, India and the US signalled the deepening of ties to a further extent as PM Modi met US vice president Mike Pence.

The foreign secretary said, “There was a sense of convergence both on bilateral issues and on global issues and we look forward to taking the relationship (forward) in the coming months and in 2019.”

On terrorism, Pence referred to the upcoming anniversary of the 2008 Mumbai attacks and lauded the counter-terrorism cooperation between the two countries. On that PM Modi reminded vice president Pence that in one way or the other, all the traces and the leads in major global terror attacks ultimately lead to a “single source and single place of origin.”

After assuming office in the White House, Trump has taken a very hard stance on Pakistan. In series of decisions, the Trump administration cancelled more than USD 300 million in aid to Pakistan for its continued unwillingness to take decisive action against Taliban and other extremist groups. Trump acknowledges the fact that Pakistan can no longer play the double role with US.

After the meeting, Pence posted a tweet saying, “Spoke about our shared vision of a free and open Indo-Pacific & reaffirmed our commitment to strengthen security and counterterrorism cooperation and coordination.”

Important discussion with India’s Prime Minister @narendramodi while in Singapore. Spoke about our shared vision of a free and open Indo-Pacific & reaffirmed our commitment to strengthen security and counterterrorism cooperation and coordination. #VPinAsia #ASEAN pic.twitter.com/Cjqkr0RQWr

These two separate incidents reaffirm America’s growing trust in India. India has emerged as a major partner of the US and the United States on the other hand considers India as power capable of countering the Chinese expansive policies. Both the countries have reciprocated each other by extending support at various forums world-wide.

Tulsi Gabbard to run for 2020 presidential elections in the US ?