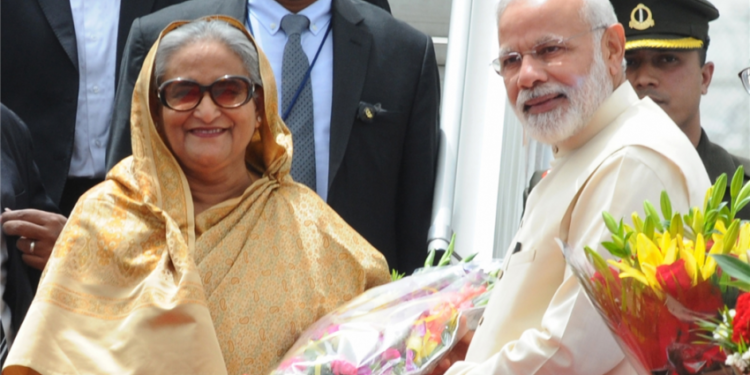 In what must be seen as welcome news for India, the current Bangladesh Prime Minister Sheikh Hasina’s alliance has won the elections with a thumping majority. The alliance led by Hasina’s Awami League, which is seen as close to India won the polls with a landslide victory. The alliance led by Hasina’s party secured 287 of the 298 seats for the 300-member Parliament. The main opposition party, Bangladesh Nationalist Party (BNP), has taken a major drubbing and has been able to win just six seats.

Sheikh Hasina has reportedly won from the seat on which she contested the polls. The election commission has announced her victory from Gopalgunj-3 constituency. Hasina won with a massive margin as she secured 2,29,539 votes while her main BNP opponent could manage only 123 votes. This shows the extent of her popularity in the country and the advantage that she enjoyed during the elections.

Sheikh Hasina coming back to power, as it seemed likely, would be a matter of relief for India. The biggest reason is that Hasina government in Bangladesh implies safer India. With Sheikh Hasina in power in Bangladesh, India has been able to keep Pakistan’s nefarious designs to destabilise the region at bay. It is important to mention here that several insurgency groups that got a free run during the days of the Zia government have been rooted out under the Hasina dispensation. Militancy has declined in a big way under the Hasina government.  In Hasina’s tenure, all important militant group leaders have either been arrested and tried by Bangladesh or handed over to India. It includes the United Liberation Front of Assam General Secretary Anup Chetia. Pakistan had been waiting for Zia to come back into power so that it could find new ways to create troubles for India. Similarly, militant groups in the Northeast would have also been waiting for a change in regime in Bangladesh. For these reasons, Sheikh Hasina retaining power is welcome news and a matter of relief for India. Given the strained relations with neighbour Pakistan, India would have definitely been averse to the idea of an adverse regime coming at the helm of affairs in Bangladesh. India cannot really afford troublesome regimes on the Western as well as the Eastern borders.

Moreover, Sheikh Hasina has been no less than a valuable ally for India in the region. The way she and her government supported India after the Uri terror attacks and the surgical strikes that India carried out in Pakistan, stand testimony to her pro-India attitude. After the Uri terror attacks, Bangladesh PM Sheikh Hasina had said that Bangladesh stood firmly beside India at the difficult hour and also expressed deep shock at the terror attack on the Uri Army base in Jammu & Kashmir. After India successfully carried out surgical strikes on Pakistani soil, Bangladesh had said that India had “all legal and globally accepted right” to respond to any attack on her sovereignty and territory. Iqbal Chowdhury, Advisor to Bangladesh Prime Minister Sheikh Hasina had said, “India has got all legal, internationally accepted right to make a response to any attack on her sovereignty and her soil.” He had also said, “it (Kashmir issue) has been a long, continued dispute and there has been a… violation from the other side and Bangladesh always believes that any aggression or attack on the sovereignty of the independence and legal right of a country is not acceptable and Bangladesh always feels that any country must honour and respect the sovereignty of a third country.” He further said that after Hasina had come to power, she had asserted that Bangladeshi soil would not be allowed to house any terror group and to plan or organise any attack or activity on the Indian side, and has been “very committed on this point that (there is) zero tolerance to any (such) type of activity.”

The way the SAARC Summit in Islamabad was boycotted by Bangladesh after the Uri terror attacks also shows how Hasina regime supported India at a crucial time. For all these reasons, India must be relieved at Bangladesh PM Sheikh Hasina being re-elected in the country. The region will, in all probability, remain stabilised under her watch.