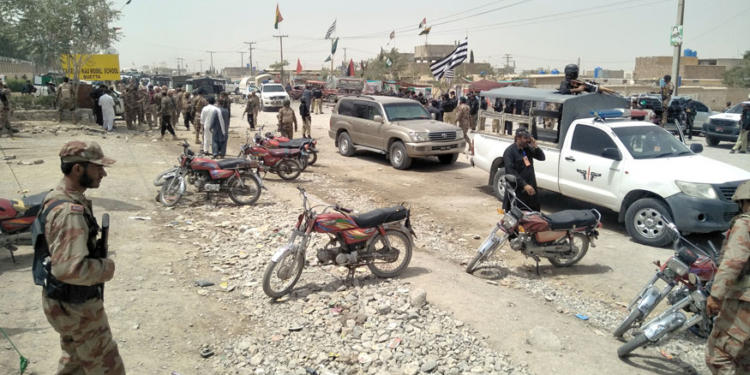 A few days after Pakistan backed terrorists attacked the armed force personnel in India and Iran, a suicide bombing killed at least 9 people and injured 11 in Quetta, Baluchistan. The attack happened on Sunday morning on the China Pakistan Economic Corridor (CPEC) route between Panjgur and Turbat city. An organization named Baloch Raji Ajoi Sangar (BRAS) has taken the responsibility of the attack. BRAS is an alliance of three organizations (Baloch Liberation Army, Balochistan Liberation Front and Baloch Republican Guard) fighting for the freedom of Balochistan.

The attack comes in the backdrop of the terror attack in Kashmir in which 40 CRPF personnel were killed. A suicide bombing in almost similar fashion killed 27 troops of Iran. Iran’s Revolutionary Guards said that the attack was carried out with the help of “Pakistan’s security forces”.

The Baloch nationalists have waged a war against Pakistan’s colonization. Balochistan has been fighting for its freedom as the state of Pakistan has continued grave human rights violation and exploited the natural resources of the province and its coastlines. China is developing an economic corridor with investment worth 46 billion dollars but the local citizens have very little stake in the project. Every political party blames the other for the lack of development in the state but none of them are ready to give Balochistan its due share.

The province is rich with natural resources like gold, copper, silver, oil, and gas. The province covers 44 percent of Pakistan’s land area but accounts for only 5 percent of its population. The Gwadar port being developed to promote trade and investment is poised to only benefit business elites based in Karachi and political elites based in Islamabad. The Rawalpindi based Pakistan Army also has stakes in the province while top military officers exploit its natural resources for monetary benefits.

Balochis constitute more than half of the state’s population but the political elites of Islamabad have denied their rights for long. Balochistan is known as “Neglected province where a majority of population lacks amenities.” Moreover, the share of the state in national GDP declined from 4.9 percentages in the mid-1970s to 3.7 percent. The GDP per capita of the state is 740 dollar per year in comparison to 1,577 dollars for Pakistan and 1,748 for Sindh. The per capita income of Balochistan is half of Pakistan and Sindh despite the fact that it contributes most to natural resources. The natural resources of the state are exploited by industrialists but the local people do not get a fair share for these resources.

The Pakistani army, dominated by Punjabis and Pashtuns has oppressed the Balochi people for decades. In the year 2018, 119 people were killed in the state including 15 police personnel in conflicts. The province gets little in royalties from gas revenues in comparison to Punjab and Sindh just because it has a little pocket for political bargaining. The heavy-handedness of the Pakistan military has led to the death of hundreds of civilians and has also caused mass displacements. There have been reports of Pakistan Army personnel raping Baloch people. “Baloch nationalists, militants or even innocent bystanders are picked up, disappeared, tortured, mutilated and then killed” says a report by BBC. According to journalist Malik Siraj Akbar, as of May 2015, “dozens of people are losing their lives every day” in “extra judicial killings committed by the Pakistani security forces” in the province of Balochistan. There have also been reports of mass graves and abduction of people by the Pak army.

The economic inequality coupled with natural calamities and excessive violence by the Pakistani state and army will further alienate the Baloch people. The Balochistan freedom struggle will gain momentum as the atrocities by the state of Pakistan increase on poor Baloch people.