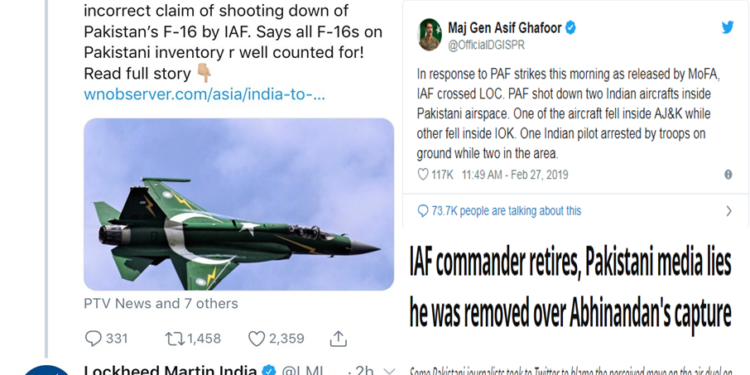 Ever since the IAF cracked down on Jaish-e-Mohammed terror training camp located in Balakot, Pakistan propaganda machinery has been working overtime in order to create a false perception about the ground realities. Pakistan has been inflicted heavy damage and is also facing intolerable international pressure for raising terror camps on its soil. However, in a bid to mislead its own citizens, the country’s military establishment and media have been indulging in baseless propaganda.

Even as reports of the IAF striking deep and hard in the Pakistani territory emerged, Pakistan claimed that the IAF bombing was misdirected and caused no damage. Pakistani Army spokesperson, Major General, Asif Ghafoor claimed that while the IAF fighter dropped payloads in haste while escaping, it caused no damage. Pakistan further claimed that the IAF airstrikes did not kill any militant and that only dozens of trees were damaged. However, satellite imagery has a different story to tell. A satellite expert shared images, which display the area of impact after the IAF struck the terror camps in Balakot, Pakistan. He lauded the IAF for successfully choosing non-military targets away from the civilian population. As per the expert, the area of impact seemed like a huge JeM terror training camp. Moreover, as per sources the intelligence agencies have evidence in the form of radar imagery which confirmed that four buildings in the Jaish e Mohammed terror camp were hit.

Pakistan was obviously embarrassed about how it could not defend the Maulana Masood Azhar led Jaish-e-Mohammed (JeM) terror training camp. Pakistan had to lie about it in order to satisfy its citizens. However, Pakistan’s propaganda machinery did not stop here. It continued spreading baseless stories and outright lies in the face of rising tensions between India and Pak. The desperate refusal about IAF airstrikes was followed by lies about the results of the aerial combat that had ensued between IAF and PAF fighter jets after the latter had violated the Indian airspace. Following the airstrike, Pakistan had also lied about the number of IAF pilots who had been taken captive by the terrorist country. Initially, Pakistan had claimed that it had captured two Indian pilots. However, later on, the Pakistan Army retracted its false statement and stated that only one pilot, Wing Commander Abhinandan Varthaman was in its custody. It seems that Pakistan mistook its own pilot for an Indian pilot and this might have led to the lie of two Indian pilots being taken captive by the Pakistan Army.

Following this, Pak again resorted to a lie. It started spreading the lie that senior IAF official, Commander-in-Chief of the Western Air Command, Air Marshal Chandrashekharan Hari Kumar had been sacked from the Indian Air Force following the capture of Wing Commander Abhinandan Varthaman. However, later on, it became clear that he had retired from the Indian Air Force on February 28, 2019.

Now, the country has added another lie to its pack. Danyal Gilani, Director of Information Minister’s Office and former Press Secretary to Pakistan PM, tweeted, “F-16 manufacturer Lockheed Martin to file law suit against false Indian claims & expresses annoyance over the factually incorrect claim of shooting down of Pakistan’s F-16 by IAF. Says all F-16s on Pakistan I inventory r well counted for!”

However, in yet another major embarrassment to the terrorist nation and its propaganda peddling machinery, Lockheed Martin has outrightly rejected these claims by the neighbouring country. The company replied to Danyal Gilani and said, “Lockheed Martin has made no such comments.”

The neighbouring country is going through a period of unmanageable embarrassment. And in order to save its face, the terrorist country is manufacturing as many lies as it can. But with every lie being busted, Pakistan is only exposing itself for further embarrassment by propagating such lies.