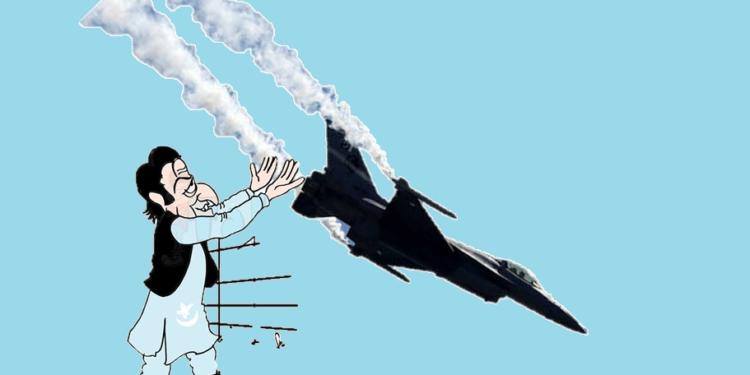 With the entire globe on its back, Pakistan is squirming like a fish, trying to get out of the mountain of allegations it’s buried in. The gravest one out of these is the usage of F-16 fighter planes against India, a day after India bombed the JeM terror camps in Pakistan and PoK. In order to get out of the ordeal, Pakistan PM Imran Khan has resorted to lying, which has been instantly refuted by the Pentagon.

The truth always prevails and is always the best policy. BJP's attempt to win elections through whipping up war hysteria and false claims of downing a Pak F 16 has backfired with US Defence officials also confirming that no F16 was missing from Pakistan's fleet.

Imran Khan stated, “The truth always prevails and is always the best policy. BJP’s attempt to win elections through whipping up war hysteria and false claims of downing a Pak F 16 has backfired with US Defence officials also confirming that no F16 was missing from Pakistan’s fleet.”

The prime minister began his tweet in a very positive manner; although he is not practicing what he is preaching. The statement is far from the truth and is an attempt of Pakistan to befool the international community.

The United States defence department on Friday said it was “not aware” of any investigation that was conducted to ascertain if Pakistan had lost an F16 during its attempted strike on India. This is contrary to the report in the Foreign Policy magazine that vaguely cited unidentified defence officials who counted the planes revealing none were missing. It attributed the finding to two unidentified senior US defence officials and said the count was conducted at the invitation of Pakistan.

However, a US defence department spokesman told Hindustan Times in a statement that they, the department, “weren’t aware of any investigation like that”, that was said to have been conducted. The state department distanced itself from the news report saying, “As a matter of policy, the department does not publicly comment on details of government-to-government agreements on end-use monitoring of US-origin defence articles.” It also reiterated its policy on Pakistan saying, “It is important to note that since January 2018, the United States government has suspended security assistance to Pakistan.”

Pakistan military’s ISPR while accepting the usage of the F-16 fighter jets had earlier stated, “When 2 Indian jets crossed LOC they were shot down by PAF. Whether it was F16 or JF17 which shot down 2 Indian aircraft is immaterial. Even if F-16 has been used as at that point in time complete PAF was airborne including F16s, the fact remains that Pakistan Airforce shot down two Indian jets in self defence.”

A key member of Pakistani Prime Minister Imran Khan’s cabinet, Chaudhary Fawad Hussain had also justified the stance by stating, “We purchased them from America and didn’t get them in a grant. So we’ll decide where to deploy them. F-16 jets will be used for the purpose for which they are needed.”

Now, it seems Pakistan is doing a 360-degree turn on its statements. This is linked to the condition imposed by the United States that the fighter jets will not be used in aggression against any other country, but only in the war against terror. The US does not allow F-16s to be used in an offensive role and has incorporated a number of restrictions in the deal. Moreover, usage of fighter jets outside of Pakistan must be approved by the United States government. However, Pakistan used the fighter planes to avenge the terrorists harboured on their soil, because of which they are receiving international backlash and condemnation.

Ever since the US suspended all security assistance to the country and even reduced the military aid to “almost nothing”, Pakistan has been vying to get on the good books. The US has realised that the aid in the pretext of counter-terror operations was actually being used for terror operations by the hostile neighbour. Moreover, Financial Action Task Force (FATF) has grey listed the country and there is a plausible chance it would be blacklisted by next month if Pakistan does not rectify itself. The economy is in ruins and with such an FATF listing, their loans by International Monetary Fund and World Bank will not get sanctioned.

Pakistan is now grasping for air into the abyss they are being pushed into with the tremendous international pressure. By hook or by crook, they want to exonerate themselves from their terrorist allegations. While that seems to be a distant dream, Pakistan is attempting to at least get some support from the US government by appearing to comply with their end user agreement. Moreover, this violation of the conditions imposed can have severe consequences for the country as the US could demand grounding of F-16 jets by Pakistan in response to the breach. Lying about the US government’s “approved count” has only pushed the country further into the black hole and might lead to them losing their entire fleet of F-16 jets.