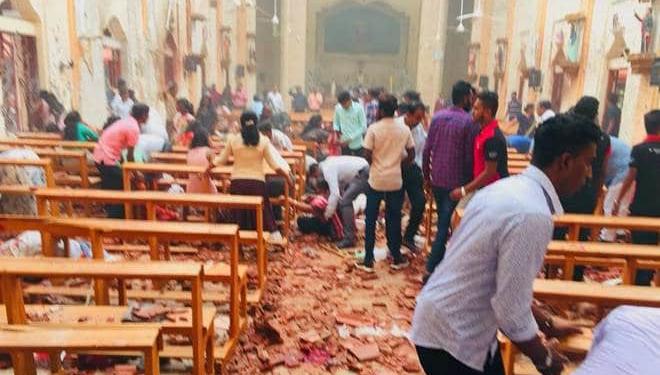 Every terror attack across the globe invariably finds links with the terror factory in our neighbourhood, Pakistan. It does not come as much of a surprise that the Easter bomb blasts in Sri Lanka reveal a clear link with Pakistan. According to a report by News18, the Sri Lankan police, after conducting investigations have arrested 9 Pakistani nationals for their involvement in the terrorist attack.

It has come to light that these 9 Pakistani nationals have aided the terror attack by providing them resources for making the bombs along with other facilities. These 9 Pakistani nationals are undergoing intense questioning separately from each other. Moreover, earlier today, the police had reported a loud blast sound coming from the region of Pugoda, about 40 kms away from the capital Colombo. However, no casualties have been reported.

This fresh development is regarding the deadliest terror attacks in Sri Lankan history since the civil war, mainly targeting the Christian of the state. The terror attacks have caused 400 casualties so far and the death toll is increasing every day. The probe has cleared the doubts about the motive behind the attack and has revealed that this was in retaliation for the Christchurch incident. The state minister of defence Ruwan Wijewardene said, “The preliminary investigations have revealed that what happened in Sri Lanka (on Sunday) was in retaliation for the attack against Muslims in Christchurch.”

The government is deep into investigating the attack. Sri Lankan minister, Lakshman has alleged that despite intelligence reports from India regarding the terror attacks, some officials did not take the requisite action. The minister has demanded a probe in this matter and has expressed doubts stating that such a huge attack is not possible without help. They suspect that some people of the Sri Lanka Intelligence Agency deliberately allowed this to happen.

ISIS has taken reasonability of this attack. The warning signs of Islamic terrorism picking up in Sri Lanka had emerged in 2016 itself when 32 of its elite Muslims joined the Islamic State. Islamist terrorism has gripped the overall globe, emerging as the most pressing issue. Out of all the countries supporting the terror, Pakistan is in the forefront. They have been using the US given aid for supporting terrorism instead of countering it and have also provided a safe harbour to the terrorists. Their facade has melted away and the true nature of the country had come to light in front of the world. The US have drastically reduced the aids to the nation in order to curb their activities. FATF has grey listed the country because of its terrorist links and is considering to blacklist them. India has also denounced the country in light of the JeM terror attack in Pulwama that took the lives of 44 CRPF personnel. Now, in spite of everything on their plate already, the country has gone and gotten itself involved in the Sri Lankan attack, seeking revenge for an incident that happened on another continent.