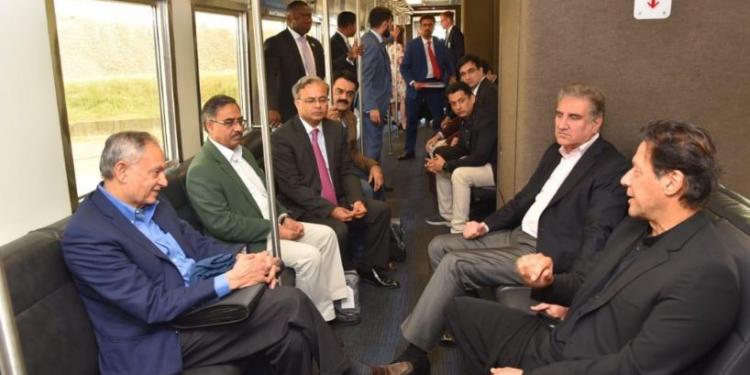 In a massive embarrassment for Pakistan and its Prime Minister Imran Khan, no officials from the United States were present to receive him on his visit to the western nation. Imran Khan is on a three-day visit to meet with US President Trump. According to the Pak foreign minister, Trump and Khan would have two meetings in the US capital, with the first one scheduled to be held in the Oval Office and the second one set to take place in the Cabinet Room.

Imran Khan took a commercial Qatar Airways flight to the United States, only to find the US delegation absent and had to take a bus to the terminal at the Dulles International Airport in Washington D.C..  In addition to President Trump, Imran Khan is also scheduled to meet IMF acting Chief David Lipton and World Bank President David Malpass. Recently the International Monetary Fund had approved a $6 billion bailout package for the rogue nation which is struggling to even meet its regular financial requirements. This is the 13th IMF bailout for Pakistan, with the fund trying to correct the ‘structural balances’ in the country.

Wait. Pakistani PM Imran Khan had to take one of those horrible people-movers at Dulles airport??
(no sign of Gen. Bajwa in the arrival video) pic.twitter.com/TGxSLqqj3Z

On his visit to the US, Imran Khan is also scheduled to speak at a Think Tank, the US Institute of Peace and later on Tuesday Secretary of State Mike Pompeo will call on him. He is also poised to address a gathering of Pakistani Americans in the Capitol One Arena in downtown Washington D.C.; however, it remains to be seen whether the address will go as planned following the major snub at his arrival. Pakistan is also taking services of lobbying firm Holland and Knight to try and save whatever ground of support it still holds in the United States.

Protests by several ethnic groups like Baloch, Sindhis and Mohajirs also marked Imran Khan’s visit to Pakistan. The Baloch groups have also started several campaigns in the American national capital urging the US administration to help end “enforced disappearances” in Pakistan. The issue of rampant and state-sponsored human rights violation in the Sindh region has also been raised, a bipartisan group of ten influential lawmakers had met Donald Trump on Saturday in this regard.

Ahead of the visit, statements by the US administration were surely not conducive for the Pakistani PM’s visit. A senior administration official ruled out any possibility of lifting the suspension on security aid to Pakistan, which was suspended in January 2018, unless sustained and decisive action is taken against terror organizations operating out of Pakistan.

“As you know, we suspended security assistance to Pakistan in January 2018. And As of now, there’s no change to that policy,” the official said.

According to Pakistani media, the Finance Minister of Pakistan has also indicated that Imran Khan will also be accompanied by Pakistan’s military leadership, which essentially is also known to be the real power center in Pakistan.