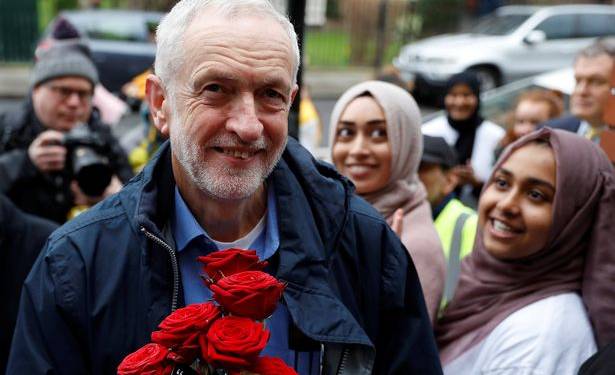 At a time, when the entire world except the terrorist country of Pakistan, has unanimously accepted the fact that abrogation of Article 370 that granted special status to the state of Jammu & Kashmir, is an internal matter of India, Britain’s Leader of Opposition and Labour Party leader Jeremy Corbyn tweeted on the issue which exposes his party’s prejudicial approach towards India.

Jeremy Corbyn tweeted, “The situation in Kashmir is deeply disturbing. Human rights abuses taking place are unacceptable. The rights of the Kashmiri people must be respected and UN resolutions implemented.” The Labour Party leader’s tweet is not based on ideological consideration but only on political expediency and compulsions. Both the language and content of his tweet suggest that he is trying to appease a particular cross section of voters, viz. radical Muslim Britishers in general and the Pakistani origin citizens of the UK in particular.

The situation in Kashmir is deeply disturbing. Human rights abuses taking place are unacceptable. The rights of the Kashmiri people must be respected and UN resolutions implemented.

According to The Print, one has to keep certain factors in mind in order to understand Corbyn’s vociferous stance on Kashmir. The fact remains that Corbyn, as many of his Labour Party predecessors have in the past, catered to the Pakistani vote. This vote bank politics is based on the fact that the Pakistanis vote en masse for the Labour Party. As opposed to this, the British Indians do not vote as a bloc and their vote share is usually divided between the Conservative and Labour parties. The Pakistani vote can therefore tip the balance in 30 to 40 seats. This does not leave much to be inferred. The fact remains that the Labour Party is trying to appease the Pakistanis for electoral benefits.

As per The Print, there is nothing new about Labour Party’s anti-India stance. It can be described as more of a historical phenomenon. Nehru and the Congress which were angered by Winston Churchill’s racial remarks mistakenly turned to Labour Party. Nehru and the Congress remained hostile towards the Conservatives which even translated into a national policy that remained in practice for a while. However, in what can be described as yet another act of short-sightedness by Nehru, he did not realise that while Churchill was a racist, it was the Labour Party which had caused the real damage to India.

The Labour Party led by Attlee was in power from 1945 to 1951. It was the Labour Party which steered India towards a partition by introducing the Cabinet Mission Plan and later on divided the then British India by introducing the India Independence Act. Later on, the Labour Party did not accept the accession of Jammu and Kashmir into India as legal and final. Even though it was a clear position at the time of India’s Independence that the Princely states had three options- i) Remaining independent, ii) Acceding to India, or iii) Acceding to Pakistan.

Once, Maharaja Hari Singh had signed the Instrument of Accession whereby Jammu & Kashmir acceded into India, Labour Party or for that matter any foreign power had no business to make any remark about Jammu & Kashmir. This arrangement had been left behind by the colonial country itself and it along with the entire international arena therefore remains bound to accept the accession of Jammu & Kashmir as valid, binding and final. However, Labour left-wing members continue to hold Kashmir a disputed territory. By doing so, the Labour Party has carved out a Pakistani vote bank for itself. This therefore explains the political expediency behind Corbyn’s tweet.