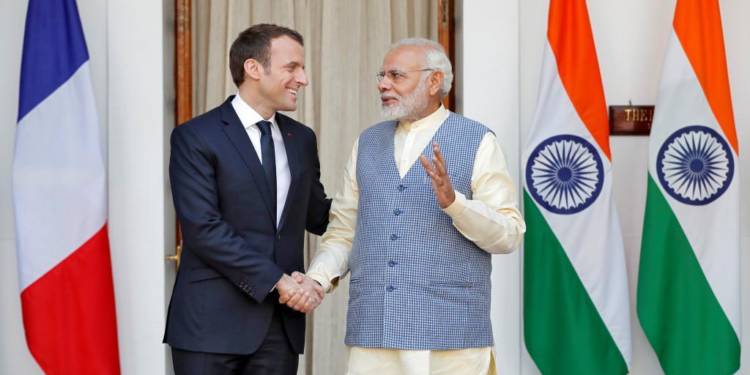 Pakistan has been trying to internationalize the Kashmir issue since the abolition of Article 370. US President Donald Trump, who is well known for making irresponsible statements, also proposed to mediate on the Kashmir issue but the Indian government released a very strongly worded response to him. Quite opposite, the French President has said that he will ask Imran Khan to resolve the issue bilaterally. “I will also speak to Pakistan Prime Minister after a few days and tell him that the talks should be held bilaterally,” said Macron.

It must be noted that France is one of India’s most trusted allies. France and India have enjoyed close defence, economic, and cultural ties for decades. India is among the largest market for French defence exports. India had signed Strategic Partnership Agreement with France in 1998 under former PM Atal Bihari Vajpayee. Both countries had also signed Civil Nuclear Agreement in 2008 and cooperation over counter terrorism, urbanization, and defence grew over last few decades.

In the defence field, France and India cooperate extensively. The country supplied 36 fourth generation Rafale fighter jets to India in a government to government deal. Dassault Reliance Aerospace Limited (DRAL) has established a manufacturing facility in the state of Maharashtra in collaboration of Reliance Defence. France has also signed six Scorpene submarines under technology transfer agreement and two submarines Kalvari and Khanderi have already been built.

France is major supplier of components and equipment for India’s space programme. ISRO and the French Space Agency (CNES) cooperate on many projects. After the India’s nuclear test in 1998, France was the only nuclear weapon country to oppose the call for ban against India.

Moreover, in a big boost to India’s strategic interests, the Indian Navy might also get access to the French naval base in Djibouti for the purpose of refuelling and operational turnaround. This comes after operationalization of the Mutual Logistics Support Agreement (MLSA), which was signed between India and France. A defence source stated, “We already have access to the French base on Reunion Island for refuelling. We are in discussion for using their base in Djibouti.” Djibouti is a former French colony that is very strategically located in the Horn of Africa.

France and India also cooperate in counter-terrorism operations. France initiated the proposal to that the United Nation Security Council (UNSC) should blacklist Jaish-e-Mohammad chief Masood Azhar in the wake of Pulwama attacks. Given the global stature of France and its permanent membership of United Nations Security Council, its support on abolition of Article 370 is crucial for India.

While the focus has mostly been on Russia and the US as far as India’s strategic partnerships are concerned, France, a major European power, has been one of the closest and most important allies India has ever had.