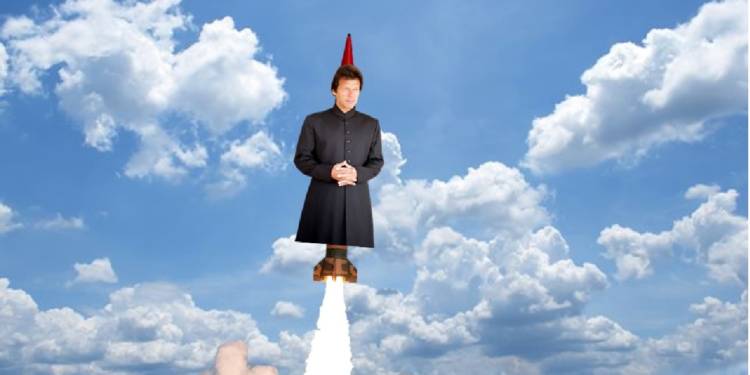 Yesterday, Pakistan PM Imran Khan in another desperate address yet again declared that Pakistan will commit nuclear suicide and take everyone down with itself if the international community does not pay heed to his tantrums over Jammu and Kashmir.

“If the [Kashmir] conflict moves towards war then remember both nations have nuclear weapons and no one is a winner in a nuclear war. It will have global ramifications. The superpowers of the world have a huge responsibility…whether they support us or not, Pakistan will do everything possible,” Imran Khan said in his address which was not only delusional but also borderline manic.

This nuclear suicide threat by Pakistani PM came just hours after PM Modi met US President Trump on the sidelines of the G7 summit in France where PM Modi firmly reiterated India’s position on the issue and said, “There are many bilateral issues between India and Pakistan, and we don’t want to trouble any third country. We can discuss and resolve these issues bilaterally,” Donald Trump not only endorsed India’s position but also claimed that “he (PM Modi) has it under control”.

Imran Khan has been running door to door to seek support in its favour on the Kashmir issue. However, the Pakistani Prime Minister has been left utterly disappointed so far as the international community has decided to toe India’s line on the matter. India has always maintained that Kashmir is a bilateral issue and Article 370 is purely India’s internal matter.

Post the abrogation of the Article 370, Imran Khan had been banking on the western world and Islamic countries for support. However, the Islamic world further isolated the terror infested state and it has only added to the embarrassment for Imran Khan. While Imran Khan was surely hopeful of getting help from Islamic nations like UAE, contrary to Pakistani expectations UAE not only endorsed India’s position on the issue but also went on to honour PM Modi with their highest civilian award – ‘Order of Zayed’. Not only UAE, even countries like Bahrain, Maldives have come out openly supporting India’s stance on the Kashmir issue.

Nonetheless, even after clear indications of the Islamic world rejecting Pakistani theory and standing strong with India and Prime Minister Narendra Modi, Imran Khan is yet to come to terms with the reality that the ‘muslim ummah’ theory has been demolished which the Pakistani establishment has been using over the past few decades.

Earlier in a joint parliamentary session, Imran Khan even went to the lengths of shamefully claiming that India would have to face Pulwama like terror attacks after the recent developments in Jammu and Kashmir. He had said, “Attacks like Pulwama are bound to happen again. I can already predict this will happen. They will attempt to place the blame on us again. They may strike us again, and we will strike back.” For Pakistan, which is already facing a lot of internal backlash for failing to deter India in any aspect’, taking refuge behind terrorists is not new. Moreover an ‘elected’ representative making such provocative comments in the Pakistani parliament is not new in Pakistani politics.

After meeting the US President Donald Trump earlier in July, Imran Khan had returned to Pakistan claiming a massive diplomatic victory and Trump’s vacuous slip regarding the mediation in the Jammu and Kashmir issue was just a cherry on the top. However, for Imran Khan his joyride was cut pretty short as it was was clearly apparent that the international community was not having any of Pakistan’s lies and cries on Kashmir. USA, Russia, France, UK and all other major nations including India’s neighbours Sri Lanka, Afghanistan, Bangladesh and others have decisively endorsed India’s stand.

Instead of focusing on the Pakistani economy which is at a dismal state Imran Khan’s only focus now seems to be Kashmir. Recently, Pakistan was also found to be non-compliant in 32 of the 40 compliance parameters set by by the Asia-Pacific Group of the Financial Action Task Force (FATF). Despite concerted efforts, Pakistan could not convince the 41-member plenary to upgrade it on any one parameter. Ultimately the decision to blacklist Pakistan was taken by the APG during its meeting in Canberra, Australia. Currently reeling under massive international debt this blacklisting will further cripple the Pakistani economy which is already under intensive care.

However, FATF sanctions, economy, internal dissidence of various communities don’t seem to matter to Imran Khan. While Khan was banking on the Islamic countries and the western world for support, he was left highly disappointed with Pakistan getting snubbed from various quarters. These developments over the past few weeks have truly shown where the international community stands and now it seems like it’s game over for Imran Khan.