A Sikh Granthi’s daughter converted and married on gun point in Pakistan, that too in Guru Nanak’s birthplace 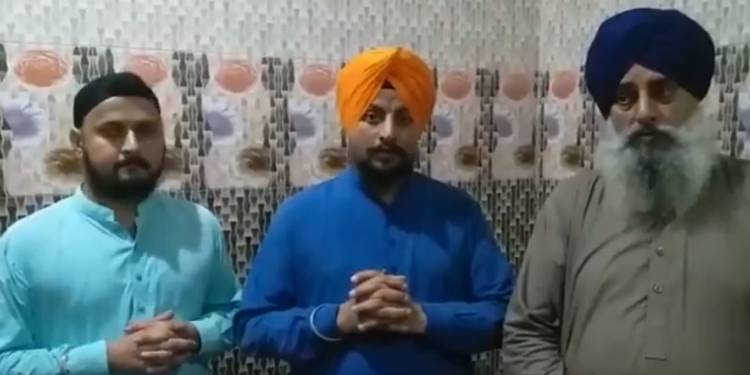 In another case of shocking incident of atrocities on minorities of Pakistan, a 19 year old Sikh girl was forcibly converted to Islam and made to marry a Muslim man. The victim, named Jagjit Kaur was renamed as ‘Ayesha’ after conversion to Islam. This incident happened in Nankana Sahib, Punjab and the father of the victim is ‘priest’ in a local Gurudwara.

This issue must be taken up at @UN as it threatens Sikhs freedom of religion pic.twitter.com/lsDsKg4ZHZ

“She had gone to stay with our elder sister whose husband was on a business trip to Faislabad. An armed group attacked the house located near Gurdwara Bad Leela and kidnapped the girl at gunpoint,” said the brother of the victim. He further added:

“We went to a police station to register a complaint. We met many senior officials but they have not listened to our complaint. The goons again came to our house and forced us to withdraw our complaint and threatened that they will also force us to convert to Islam if we persisted with the complaint.”

The shocking treatment towards the daughter of a Sikh priest (her father is a Granthi at Gurdwara Tambu Sahib) is a lesson for the followers of the religion who are seeking separation of Indian Punjab. Nankana Sahib, the city where this tragic incident happened, is birth place of Guru Nanak, the first Guru of Sikhs. The forced conversion of Hindu and Sikh girls has been reported earlier in the provinces of Sindh and Khyber Pakhtunkhwa.

The non-Muslim communities have faced persecution in the Islamic state of Pakistan. The minority communities like Hindu, Sikh, and Christians were not given fair chance to grow and prosper.

Many Sikh extremist groups have repeatedly called for liberation of ‘Indian Occupied Punjab’ to make a new country named Khalistan. The words “Indian Occupied Punjab” suggest that the main idea of Khalistani groups is to liberate only the Indian Punjab for the Sikhs, while the Referendum does not show any concern about the Pakistani Punjab or towards Pakistani Sikhs who are evidently living a more miserable life than their Indian brethren.

According to Pakistani journalist Mehreen Zahra-Malik, “The Sikh minority in the country has been living on the edge ever since extremists began to target them.” The majority of Sikh community in the country is on the run to seek safe exit from the country. The killings of Sikhs witnessed exponential rise in last few years. There is no exact figure about the number of Sikhs in the Islamic country, as they are not included in the census.

Breakthrough in targeted killings with arrest of 4, conspiracy was hatched by #ISI on foreign soil to spread communal disturbances (1/4).

The pro-Khalistan movement has always been silent about Pakistani Sikhs. The only reason could be- that Pakistan is actively helping the pro-Khalistan movement. The recent developments have only solidified these claims. Between 2016 and 2017, at least 5 Hindu leaders were brutally murdered in Punjab and on November 7, 2017, CM Amarinder Singh announced that Pakistani intelligence agency ISI conspired the attacks on Hindu leaders to instigate communal tension.

The recent incident is a stark reminder to the Sikh community, who are enamoured by the Khalistani movement, about how the minorities of Pakistan have, for long, faced ethnic cleansing at the hands of ISI backed fundamentalists in the country. It should be an eye opener for the community that India is their natural home and Sikhs have always been, culturally and historically, a part of India. Pakistan backed Khalistani propaganda is nothing but an eyewash for the atrocities committed by the terror country on the community.

Such is the power of Modi-Shah combine, that even Taliban now wants “peace talks” with India