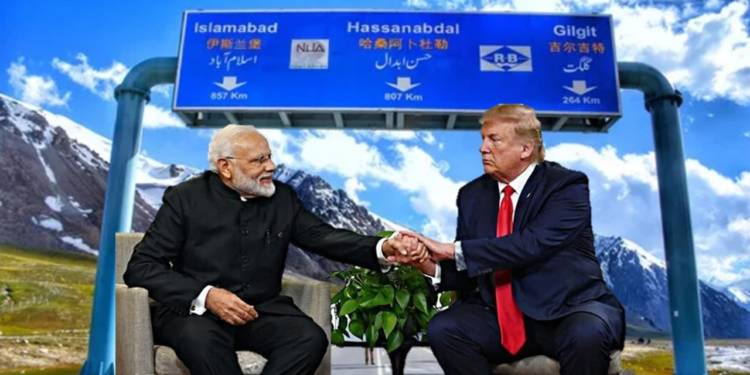 While Pakistan’s President Imran Khan goes door to door to seek funds for Pakistan and shed crocodile tears over the non-existent ‘bloodshed’ in Kashmir by India, the news of the USA withdrawing from Afghanistan and the prospect of Taliban regaining its stronghold in Afghanistan was like music to the ears of Imran Khan until Taliban urged for peace talks with Indian Government. This offer by the Taliban has unleashed chaos in Pakistan and the country has every reason to be scared.

Donald Trump is motivated to remove his troops from Afghanistan before his re-election campaign and peaceful withdrawal of the US Armed Forces will only skyrocket his approvals in the few months leading up to his re-election. Trump has derided Indian Government for not helping the USA in Afghanistan despite the former’s soft power in the terror-ravaged country. Trump did irk Indians when he offered to mediate in Kashmir which was exactly what Pakistan wanted. However, this little adventure of Trump was short-lived as Trump asserted that the Kashmir issue must be solved bilaterally between India and Pakistan at the G7 summit in the presence of Prime Minister Modi. What made Trump change his tunes?

Perhaps it can be down to the fact that India agreed to defend Afghanistan against the Taliban, helping the US withdraw its forces and end US reliance on Pakistan. Once, USA is out of Pakistan, the latter is of no use to Trump and he may well decide to side with India in taking back PoK as hinted by Subramanian Swamy on Twitter:

I have now a solid hint that if India agrees to to defend Afghanistan against terrorists like Taliban, and thus allow US to withdraw its troops, then US will side with India in taking back PoK

Swamy’s speculation is substantiated by the recent developments of Taliban urging for peace talks with India. Why would a terrorist organisation like Taliban beg for peace with India? Taliban knows that ever since it was uprooted by the US in Afghanistan, India has gone on to increase it’s foothold in Afghanistan so much so that India even built Afghanistan’s new Parliament in Kabul, which was inaugurated by PM Modi and with $3 billion in aid since 2001, India remains the largest regional donor to Afghanistan and is determined to continue its aid despite USA’s draw-down from the region. If India decides to showcase its hard power in the region, it would spell trouble for the Taliban. In a significant departure from India’s previous policy of providing only non-lethal military assistance, India has transferred a total of eight Mi-35 helicopters to the Afghan Air Force since 2015. India has earned tremendous goodwill in Afghanistan and helped in building roads, hospitals, schools, providing training, arms and fighter aircraft to the Afghan armed forces, making Indians a legitimate stakeholder in Afghanistan.

Taliban knows that India has come a long way since the Kandahar high-jacking and the multiple surgical strikes in PoK is a testament to that. The rooting out of terrorists from Kashmir and successfully hunting down of every terrorist involved in carrying out attacks in India has apprised Taliban of India’s strength and the consequences if India puts its boots in Afghanistan. The first batch of Rafale fighter jets is set to be delivered in September, which would undoubtedly be the most advanced jets in the region.

While Russia is already holding peace talks with the Taliban, it has completely sided with India on Kashmir and continues to back India in totality.With China’s proximity to Pakistan, it puts Trump’s USA in a tight spot. Befriending India is perhaps the only way out and it could well turn out to be a win-win for both the countries.

Afghanistan is scheduled to go to polls in the fag end of September and India must step up its power in Afghanistan if it wants to prevent Taliban from taking the country back to square one. India must safeguard its interests through an approach that is balanced, nuanced, and conciliatory, but also moderately partisan when and if required. While Afghanistan continues to be a graveyard for US and USSR, for India it’s an extension of its family. Historically it was the Gandhar Pradesh and presently Indians enjoys tremendous goodwill in Afghanistan thanks to its development projects and unflinching support to the Afghan government against the Taliban. India is the only stakeholder in Afghanistan who is truly committed to ensuring peace in Afghanistan.

Afghanistan represents a complex problem with the Afghan Government controlling 219 districts and 63% population with Taliban controlling 50 districts and 10% of the population making it even tougher for the USA to withdraw without casualties. At such a time, India must scale up its presence in the region and help the US and in return, demand it’s pound of flesh: Pakistan Occupied Kashmir. The signs are certainly pointing towards it as Trump becomes increasingly impatient with the 2020 US elections just a few months away, in what could make or break his re-election campaign. A triumvirate of Ind-USA-Russia will give sleepless nights to Imran Khan and one wouldn’t be surprised if he is replaced by the Pakistani Army and closure of Pakistani air space will prove to be inconsequential. It seems that India has set its sights on PoK after the abrogation of Article 370 and if successful, it would only endear Prime Minister Modi to the hearts of 1.3 billion Indians.