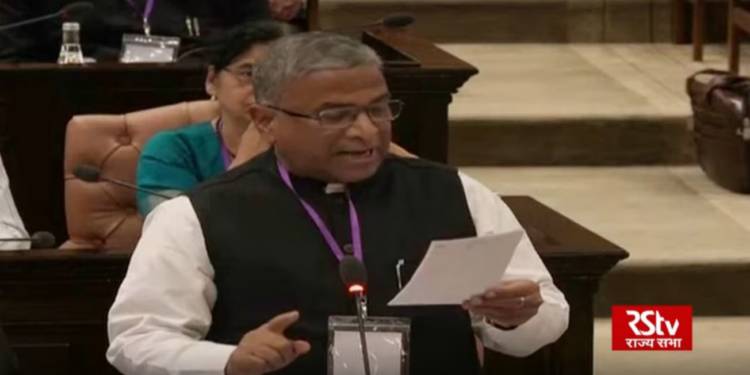 The Islamic Republic of Pakistan, which has been going through a meltdown ever since India abrogated Article 370 that granted special status to Jammu & Kashmir, has now committed yet another diplomatic blunder. During the 4th South Asian Speakers’ Summit on ‘Achieving the Sustainable Goals’ (SDGs), hosted by the Maldives, Pakistan raised the Kashmir issue. This was diplomatically awkward not only because Pakistan has already been snubbed by the global community over the Kashmir issue but also because the superficial issue raised by Pakistan is not even remotely connected to the issue being discussed in the Summit.

As a discussion was underway, Pakistan delegate Qasim Suri brought up the Kashmir issue. He said, “We cannot ignore the oppression of Kashmiris.” This led to a heated exchange of words between India and Pakistan during the meet. India immediately objected to the blatant politicisation of the summit by Pakistan. Lok Sabha Speaker, Om Birla and Deputy Chairman of the Rajya Sabha, Harivansh Narayan Singh were in Male to attend the summit.

Deputy Chairman of Rajya Sabha said, “We strongly object to raising of the internal matter of India in this forum. We also reject the politicisation of the forum by raising issues which are extraneous to the theme of the summit.” He also said, “There is a need for Pakistan to end cross-border terrorism and all kinds of state support to the same in the interest of regional peace and stability. Terrorism is the biggest threat to the entire humanity in the world today.” India also made it clear that the forum was meant to discuss SDGs and therefore, remarks made by Pakistan Delegate Qasim Suri should be deleted from the record. Singh said, “…this forum is only meant to discuss SDGs. This [Pakistan’s comment] should not be a part of the proceedings. I strongly object this part should be deleted.”

Massive! India puts Pak down in the Maldivian Parliament. India checks Pak rants. Exposes Pak for being a state sponsor of terror. From genocide in then East Pakistan (Bangladesh) to Pak terror threat to the entire region! Must listen. My top focus on @IndiaToday at 7 pm https://t.co/BIYxU5pZWG

Pakistan did not relent even after being exposed at the meet by the Rajya Sabha Deputy Chairman. Pakistani Senator Qurat ul Ain Marri launched an angry rant against India and even went on to insist that the Kashmir issue was directly connected with the discussion on SDGs. She said, “SDGs — all of them whether about women, youth or environment — nothing can be achieved without human rights. The atrocities meted out to Kashmir…” She was, however stopped by Maldivian Speaker Mohamed Nasheed who was presiding over the session.

India ensured that it did not allow Pakistan to go scot free after committing a diplomatic faux pas at the summit. India slammed Pakistan and said that a country which had committed a genocide against its own people (Bangladesh), had no moral right of raising the Kashmir issue.

Pakistani senator Marri tried to defend her country by claiming that Pakistan is not a “purveyor of terror” but a “victim”. However, India effectively retorted by reminding Pakistan about PoK. India Today has claimed that sources had told it that India already knew about Pakistan’s plans of raising Kashmir issue in the Maldives. The source said, “Speaker Nasheed and the Maldivian administration told the Pakistani delegation to stick to the agenda and not raise any political issues. Despite that Pakistan made it political. Speaker Nasheed has assured India that all references to Kashmir would be expunged from the records.”

Pakistan has been monomaniacally pursuing the Kashmir issue ever since the abrogation of Article 370. However, it has not achieved any success whatsoever. The global community understands and accepts the fact that abrogation of the provision is India’s internal matter and as such there is no occasion for any foreign interference on the issue.

However, despite having failed in all its nefarious attempts to corner India over this issue, Pakistan continues to raise it at every global forum. By not paying any heed to the issue under discussion at global forums and unnecessarily raising the Kashmir issue, Pakistan has gone into self-destruction mode. If Pakistan does not mend its ways, it will continue to remain diplomatically isolated and will eventually be seen as an unimportant, global detractor at such multilateral forums.