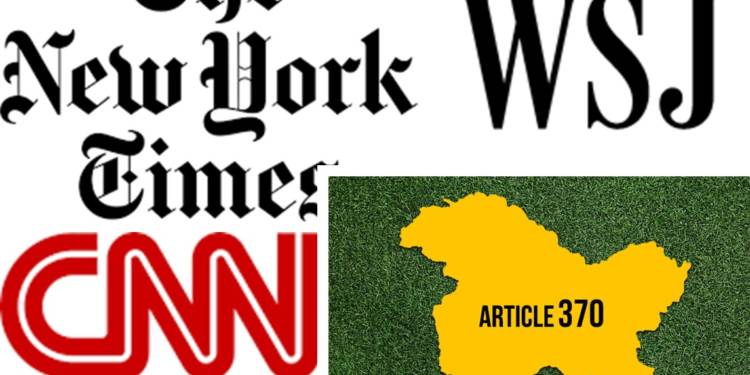 The American Liberal Media are working overdrive to peddle Pakistan’s agenda under the garb of ‘liberalism’. While the central government has managed to win over almost all the major heads of states on Kashmir through deft diplomacy, the foreign liberal media is proving to be a thorn in India’s drive to isolate Pakistan. This has prompted the Indian Ambassador to the US Harsh Vardhan Shringla to launch a massive outreach programme to the members of the Congress, senators and the think-tank community about the factual positions on India.

Mr Shringla also slammed the American liberal media and pointed out, ”Unfortunately, some of the media in the United States – particularly the liberal media – have, for reasons of their own, chosen not to provide this perspective, which is very important. Instead (they have) focused on a perspective that has been pushed forward by those who are inimical to our interest.”

In a bid to counter the rabid anti-India bias spread by the liberal media, the Indian Ambassador posted a YouTube video detailing out the real reasons for Abrogation of Article 370 and how it will economically empower the region and help its residents get rights that have been denied to them for many decades. Such has been the bias of the likes of The New York Times, Washington Post and the ilk that they haven’t considered for once why India took this decision or allow India to state its position and its reasons and have instead resorted to their anti-India agenda.

A look through the headlines run by the publications attempts to give Pakistan a saint-like image who is caught in a difficult situation due to India’s unwarranted aggression in Kashmir. The bias is so much that the move to abrogate Article 370 is seen as a move to put Hinduism above all other religions. The way they absolve Pakistan of all their crimes is the stuff of dreams for all the aspiring fictional writers out there. What’s worse is that The New York Times felt it was prudent to give Pakistan PM Imran Khan a platform which he used to threaten the rest of the world of a nuclear war if the world didn’t move to stop India. The claims of ‘neutral’ journalism of these publications are exposed when they didn’t allow even one Indian voice or look at Kashmir from India’s point of view and how Pakistan has attempted to infiltrated numerous terrorists to destabilise the region.

Recently The New York Times ran a headline ‘Pakistan Hits Back at India over Kashmir Move, Targeting Bilateral Trade’ which attempted to position Pakistan as the victim who is now biting back. Comically, the NYT didn’t bother to find out how much Pakistan’s faltering drug industry was reliant on India especially when it comes to life-saving medicines.

As per PTI, Pakistan had ordered medicines worth Rs 1.36 billion from Indian pharmaceutical companies till July 2019. In the last months, Pakistan has imported over USD 36 million worth of anti-rabies and anti-venom vaccines from India. The move proved counter-productive and the revanchist state quietly did a U-turn and resumed medicine imports as their hospitals were running out of vaccines.

The aftermath of revocation of Article 370 has seen numerous Pakistani Ministers resorting to warmongering and threatening India of nuclear war but the American media has maintained a stoic silence. Their silence is even more deafening when they conveniently forget to report on how Pakistan and China allow absolutely no autonomy to their respective Occupied Kashmir and how will they? China doesn’t allow anyone inside their part of Kashmir and to enter PoK, one needs a NOC from the Pakistan military, which is often easier said than done, hence the rabid India bashing.

Perhaps, the American liberal media is an overdrive to discredit the ‘Right’ as they increasingly succumb to Leftist ideology. Their anti-Trump coverage and positioning the likes of Ilhan Omar as heroes even though the fact that she tried to downplay the attacks of 9/11 as ‘some people did something’ smacks of minority appeasement. The bias of the American liberal media reached its peak when they towed Pakistan’s line when India annihilated terror camps in Pakistan with air-strikes in response to the Pulwama terror attack which led to Congress leader Sam Pittroda question India’s claim on the airstrikes as the NYT had raised doubts whether the air-strikes actually took place or not. UK-based The Economist has on multiple occasions endorsed Rahul Gandhi and Congress. The foreign media tried all its might to project PM Modi as a devil who has no respect for the democratic fabric of India in a bid to prevent him from getting re-elected. What the NYT feels about PM Modi matters zilch to India’s electorate – a sign that their claims of pursuing independent journalism are nothing but a sham.

There is perhaps a need to reach out beyond the Indian diaspora by the MEA and drum up the excitement of creating a New India and counter the anti-India bias of such publications.

China concedes defeat in the trade war with US, drops tariffs on a bunch of American products