Trump shot a badass letter to Erdogan. Erdogan tore it and tossed aside. Then Erdogan came back to his senses.

Good to be awake 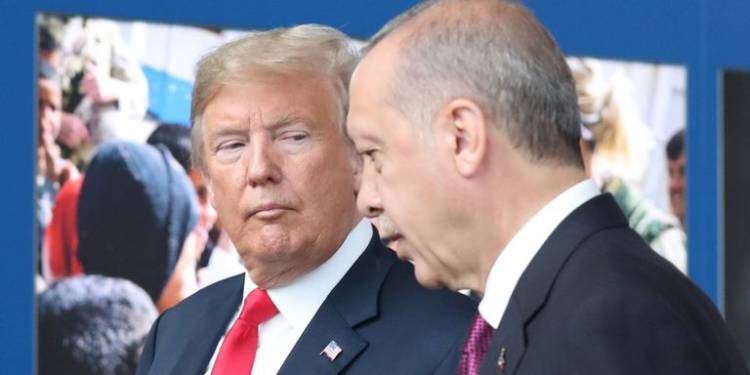 In recent developments coming for the unfolding geo-political drama in North-East Syria, United States and Turkey have agreed to a 120 hour cease fire in the region.

“Today the United States and Turkey have agreed to a ceasefire in Syria,” Pence said.

Under the ceasefire agreement, this 120 hour period will be used by the Kurdish forces to move away from Turkey’s border and later take negotiations towards a permanent peaceful solution to the conflict.

“The safe zone will be primarily enforced by the Turkish Armed Forces,” a US-Turkish statement released after the talks said. Mazlum Abdi, the commander of the Kurdish-led Syrian Democratic forces (SDF) told the Kurdish Ronahi television station “we are ready to abide by the ceasefire.” However, he expressed uncertainty over other parts along the border that Turkey wants to include in the safe zone.

“The European Council notes tonight’s US-Turkey announcement on a pause for all military operations. It again urges Turkey to end its military action, to withdraw its forces and to respect international humanitarian law”, the leaders of the EU noted in a summit statement.

Turkey allied with Syrian rebels had  launched the offensive in northern Syria a few days back  to push back the members of a Syrian Kurdish militia from the border, called the People’s Protection Units (YPG), and in order to  create a “safe zone” for the  two million Syrian refugees in turkey to be resettled. Turkish President  had  earlier in the UNGA proposed an expanded “safe zone” in northern Syria in line with his attempts to position himself as the “messiah” of the Muslim populations across the world. However, his atrocities against Kurds and bizarre stance of looking at the Kurd fighters in Syria as terrorists has given rise to the very real dangers of Syria becoming an IS dominated zone all over again.

These announcement of the cease fire comes in the back drop of an highly provocative and aggressive letter written by US President Trump, warning his Turkish counterpart Recep Tayyib Erdogan and urging Turkey to halt the military offensive, which has now surfaced dating 9th October.

Recently Trump had withdrawn US troops from Syria which cleared the way for a Turkish offensive against Kurds who had fought alongside the United States. The US President all but washed his hands of the conflict, saying that “it has nothing to do with us.”

Kurdish-led forces have been a critical ally of the US in the fight against the Islamic State (IS) group in Syria and there are fears that the destabilisation could lead to a jihadist resurgence.

Among the countries that have spoken out against Turkey’s misadventures and condemned it for attack on Syria include USA, Syria Russia, France, China, Germany, Israel, India, United Kingdom, and Denmark.

Speaking to ‘Bild am Sonntag’, German Foreign Minister Heiko Maas had said that “Against the backdrop of the Turkish military offensive in north-eastern Syria, the federal government will not issue new permits for all armaments that could be used by Turkey in Syria.”

Reiterating their opposition to the military operations by Turkey, France had also announced similar measures to register their view. “France has decided to suspend all export projects of armaments to Turkey that could be deployed as part of the offensive in Syria,…This decision takes effect immediately.” the French government had said in a statement.

Turkey has also been under fire from India majorly for its support of terror sponsoring regime in Pakistan and also now after launching military strikes in North-Eastern Syria.

In a statement, the Ministry of External Affairs (MEA) said, “We are deeply concerned at the unilateral military offensive by Turkey in north-east Syria.” Earlier reports had also indicated towards a review of an FSS project with an estimated cost of $2.3 billion which was been undertaken by Hindustan Shipyard Limited (HSL) in collaboration with Turkish M/s Anadolu Shipyard is expected to be put on a hold.

Nonetheless, now with International pressure mounting, Erdogan is sure to fall back into line and put a check on military operations against Kurdish people in North-east Syria.