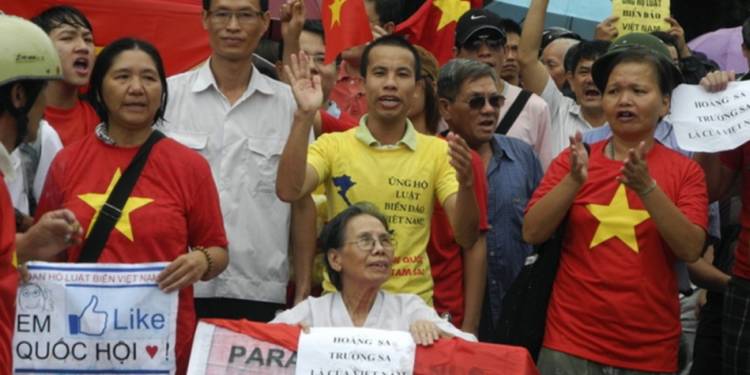 China and North Vietnam used to be blood brothers when they were fighting against capitalist US in late 1960s and early 1970s. However, a few years after Vietnam reunification (1975), both countries were facing each other on the issue of Vietnam’s invasion of Cambodia. They fought a prolonged war (1979 to 1990) which ended with Chinese withdrawal from Vietnam and disintegration of the Soviet Union.

The relations between the two countries flourished in 1990s and 2000s. Both countries opened their markets and increasing trade relations played an important role in normalization of ties. However, after Xi Jinping was anointed as the paramount leader of China, the ties started worsening. The country has adopted a muscular stance on South China Sea where Vietnam is also a stakeholder.

A few days ago, Vietnamese President and Communist Party chief Nguyen Phu Trong said Vietnam wants to have good relations with the country but not at the cost territorial sovereignty and integrity. “What belongs to our independence and national sovereignty, we will never give up. We are determined to fight and win,” he said.

Also, Vietnam’s deputy foreign minister Nguyen Quoc said that China has violated ‘Vietnam’s sovereignty and jurisdiction rights over the waters’ and there have been complicated development.

The minister confirmed that Vietnam’s stand in the South China Sea goes in line with the international rules and the UN Convention on Law of the Sea (UNCLOS) 1982. Both countries are members of UNCLOS. On October 3, Vietnam’s Foreign Ministry spokeswoman Le Thi Thu Hang said that Chinese oil survey vessel Haiyang Dizhi 8 and escorts continued to expand operations in Vietnam’s EEZ and continental shelf. Hang called the activities, which have been going on since July, a serious violation of Vietnam’s sovereignty and jurisdiction rights.

On the occasion of 40th anniversary of Sino-Chinese war, Vietnamese state run media criticized China while Chinese media kept a mum over it. “The 40th anniversary of the Sino-Vietnamese War went unnoticed in China, as no commemorative activities were allowed in the country – not even any Vietnam-related posts on social media,” wrote Cary Huang in South China Morning Post (SCMP).

The aggressive stance of Vietnam over South China Sea and criticism over Chinese involvement in Vietnam show that the country will not give any concession on South China Sea.

The souring Sino-Vietnamese ties give India a chance to have a tit for tat policy for China. Some strategic analysts see Vietnam as a part of India’s attempts to contain the dragon, just as China uses Pakistan as a tool to contain India. For India, the growing nation appears to be a very natural and obvious choice, when it comes to effectively countering the Chinese strategy of encircling the country with military bases in the Indian Ocean. It will be in India’s interests that Vietnam exercises control over its part of the South China Sea as it is believed to be rich in oil and natural gas deposits.

Vietnam has been a part of India’s cultural sphere for centuries. The ancient kingdom of Champa took inspiration from India’s cultural treasures. In recent times, India has expressed support for the cause of Vietnamese people. Slogans such as ‘Amar naam, tomar naam, Vietnam, It used to reverberate on Kolkata’s streets, as would ‘Ho, Ho, Ho Chi Minh’ (We shall fight, we shall win)’. At the height of the war, the name of the street where US Embassy was located was changed to Ho Chi Minh Sarani to spite an ideological foe.

Vietnam is rife with anti-China sentiments, given China’s bellicose attitude on the South China Sea dispute where Vietnam’s maritime interests are under threat too among other southeast Asian countries. Given the deepening ties with the nation, India could channelize the popular sentiment against China into building a strong mutually beneficial relationship with the Southeast Asian country.

Trump shot a badass letter to Erdogan. Erdogan tore it and tossed aside. Then Erdogan came back to his senses.