Every PM saw the opportunity in the Gulf. But it was only PM Modi who turned it into reality 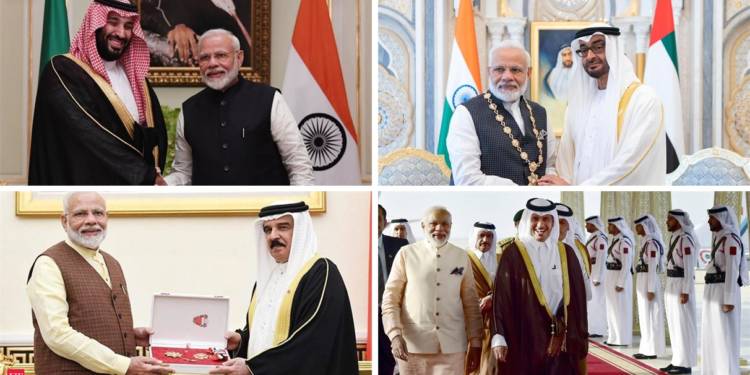 As Prime Minister Narendra Modi wraps up yet another successful foreign visit to Saudi Arabia, the latest developments certainly point towards a bright future for India’s relation with gulf nations. Twelve MoUs have been signed between India and the West Asian nation in defence industries collaboration, renewable energy, security cooperation and civil aviation sectors also indicating towards the growing synergy between India and its extended neighbourhood to the west.

“It is always a delight to meet His Royal Highness Prince Mohammed bin Salman bin Abdulaziz. His vision for Saudi Arabia is remarkable. We had an extensive meeting during which we discussed numerous issues. Stronger friendship between our nations augurs well for our people,” PM Modi tweeted after the Crown Prince of Saudi Arabia, MBS hosted him for dinner. PM Modi in his current visit to Saudi has also signed a ‘strategic partnership deal’ making Saudi Arabia the fourth nation after Germany, Russia and Japan to do the same.

It is always a delight to meet His Royal Highness Prince Mohammed bin Salman bin Abdulaziz. His vision for Saudi Arabia is remarkable. We had an extensive meeting during which we discussed numerous issues. Stronger friendship between our nations augurs well for our people. pic.twitter.com/33qiXnV7H7

Since coming to power in 2014, PM Modi has been proactive in reaching out to the gulf nations and even those in the levant, while the opposition and many in the pseudo-liberal media have denigrated PM Narendra Modi’s efforts towards the same, questions have also been raised as to the result of such international visits and whether these international visits have produced the intended outputs. Nonetheless, recent geo-political developments and many over the past few years are surely the most befitting reply to all the pessimists. The most recent of which is surely the current reaction of the international community regarding legislative developments in the two union territories of Jammu and Kashmir and Ladakh.

While Pakistan is getting support from a handful of fringe states; USA, Russia, EU, Sri Lanka, even Muslim majority gulf nations like the UAE have sided with India and most of the states have maintained the issue to be ‘internal’ to India and also struck off any possibility of International intervention citing the ‘bilateral’ nature of dispute resolution mechanism between two nations.

PM Modi’s efforts to improve cooperation have also been getting a massive positive response from the international community and more so from nations in West Asia. Earlier Prime Minister Narendra Modi was honoured with “The King Hamad Order of the Renaissance” in Bahrain as he held talks with King of Bahrain Hamad bin Isa Al Khalifa on various bilateral and regional issues on the first ever visit of an Indian Prime Minister to the gulf nation earlier this year. While receiving the award PM Modi had said, “It is an honour for entire India. This is a symbol of the close and friendly relations between the Kingdom of Bahrain and India.” On the same tour during his visit to the United Arab Emirates, PM Modi was also honoured with Order of Zayed, United Arab Emirates highest civilian order. Earlier PM Modi had also received King Abdulla Aziz Award of the Kingdom Saudi Arabia among a number of awards from other nations and international organizations.

While Narendra Modi has been successful in overhauling India’s image to that of a global contributor from a regional power, these specific awards and accolades surely entail special significance. Saudi Arabia, United Arab Emirates, Bahrain, honouring PM Modi and in a sense our nation evidently indicates towards a seismic shift in outlook of gulf nations towards India which has been more or less passive for a large part of Republic of India’s  diplomatic history

An earlier agreement to give Indian Navy access to the Duqm port in Oman is also poised to have positive results towards India’s strategic reach westwards and in the Indian Ocean. Coupled with the agreement with the UAE for joint naval exercises in the Persian Gulf, India is certainly making progress in improving its presence in the area. India had also signed a currency swap agreement worth 3,500 crores (500 million dollars) with UAE, providing for exchange of Indian Rupee with UAE’s Dirham. Earlier The Saudi Ambassador had also told PTI in an interview, that “Saudi Arabia is looking at making investments in India potentially worth USD 100 billion in the areas of energy, refining, petrochemicals, infrastructure, agriculture, minerals and mining.” Al Sari also spoke about Vision 2030 of Crown Prince Mohammed bin Salman and spoke about what it means to India-Saudi Arabia relations. He said that it would result in significant expansion in trade and business between the two countries.

Foreign diplomatic relations, which are inherently slow paced, require constant struggle against the status quo, However, Prime Minister Modi’s pragmatic and proactive approach in this respect has beared swift positive results. India’s friendly relations with gulf nations is a striking example, while at the home turf Narendra Modi is portrayed as ‘anti-Muslim’ by a specific section of media, at the global stage, gulf nations which are mostly Islamic majority have showed their regard and respect for the Indian Prime Minister and India, by honouring him with the highest civilian awards.

It is important to note that these developments just make the tip of the iceberg of the progress of partnership between India and Gulf Nations over the past few years, which has certainly grown at an unprecedented, accelerated pace. While India has emerged as a sustainable and credible partner towards a stable world order, the efforts have surely been reciprocated by partner nations. Nonetheless, efforts by the Modi government in this regard to further solidify India’s relationship with gulf nations are surely poised to pay off many folds.