So, Mahathir Mohamad isn’t just a fool but also a coward. Look how he has prostrated before China 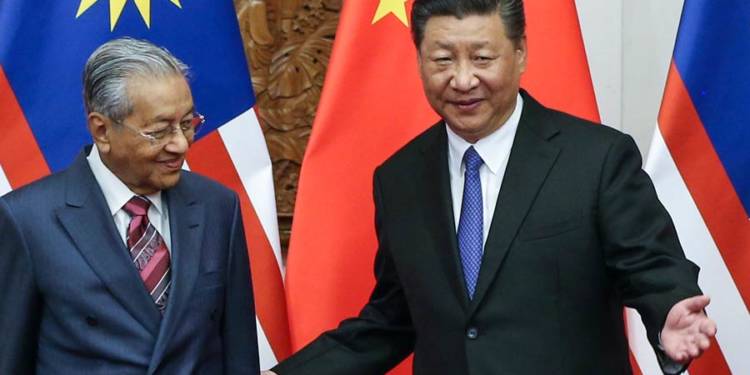 Malaysian Prime Minister Mahathir Mohamad, who assumed office in 2018, doesn’t plan to continue till 2022 and hopes to pass on the baton soon. However, by the time Mahathir decides to pass on the baton, it will be a case of too little too late for Malaysia as the 94-year-old heralds the country into unchartered territory. Recently, at the ASEAN summit, he has all but given up Malaysia’s claim to the South China Sea.

Although he has said that Malaysia hasn’t given up claims over islands, Mahathir’s stance and statements have been completely benign as Mahathir claimed that China has not acted aggressively towards Malaysia in the sea dispute and indicated that Malaysia was not ceding its ownership of territories in one of the most strategic waterways in the world. He further said, “So far, China has not done anything to restrict ships over the South China Sea and we are quite satisfied with that. I pointed out that we have claim also in the South China Sea because of five islands altogether that’s ours.”

This is in complete contrast to his initial strong stance against China; after assuming power, Mahathir cancelled OBOR projects. Earlier this year, Malaysia had cancelled two major infrastructure projects under OBOR which were carried out by China in the country. The East Coast Railway Link planned to connect the South China Sea in the east coast of the Malaysian Peninsula with strategic shipping routes in the west was cancelled by the Mahathir government and in an interview, Mahathir said that he had evidence that domestic companies could have built East Coast Rail Link about half of the $13.4 billion. Despite knowing that China laid a debt trap to attain greater influence over Malaysia, Mahathir’s siding with China is shocking which can put Malaysia in increasing danger. If Mahathir continues like this, it will not be far-fetched to say that Malaysia might become the new Pakistan for China.

Recently, the Prime Minister was embroiled in controversy over his comments on Kashmir. Mahathir’s faux pass at the United Nations General Assembly drew a sharp reaction from India and things have only gone downhill for him since then. The Modi-government, angered by Mahathir’s speech toeing the Pakistani line on Kashmir at the UNGA, is mulling restricting imports of some products from Malaysia including palm oil. If India goes ahead with its plan to restrict the palm oil imports from Malaysia, it will have a devastating impact on Malaysia’s economy considering the fact that India’s total import of Malaysian products was 2.7 per cent of Malaysia’s GDP.

Even the Malaysian media had slammed Mahathir for his comments against India as Malaysiakini claimed in its article: ‘Mahathir you have made a mess’, “Such a move can affect the economic state of Malaysia concretely since India is the second-largest buyer of Malaysian palm oil with 150,000 tons imported monthly. Palm oil is arguably Malaysia’s greatest source of income and the country is already struggling with international palm oil bans and an ever-increasing competition with Indonesia. So to have Indian buyers actively looking to switch to Indonesian palm oil exporters is a big deal.”

After facing the backlash, his government tried to clean up the mess with India as it offered to reduce the trade deficit with India and then Mahathir again foolishly reiterated his Kashmir stand as he said, “We speak out our minds and we don’t retract or change. We felt the people of Kashmir had benefited from the UN resolutions on Kashmir, and all we are saying that we should abide by the resolutions, not just India and Pakistan but even the United States of America and other countries, otherwise what’s the point of having the UN?”

Also after India’s RCEP stand, Mahathir hits new levels of paranoia and craziness as he went to the extent of giving the negotiation logjam an American twist. India kept its national interest above the trade deal and the logjam was due to India’s concerns weren’t addressed and not because of the USA who was sending its lowest level delegation.

Mahathir has completely bowed down to the Chinese leadership after initially showing resistance and this proves the country’s Prime Minister lacks sense. As the leader of his country, his stance on the South China Sea is unbecoming of a leader and his tenure will prove to be detrimental to Malaysia in the long run.