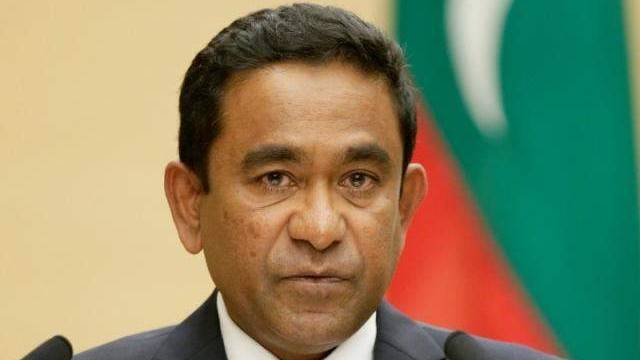 The island country of Maldives almost lost its sovereignty to China thanks to the actions of its former President Abdulla Yameen. It was widely believed that Yameen’s government was a puppet government whose only motive was to serve at China’s behest. Yameen lost the 2015 elections paving the way for Solih to take the Maldives back to democracy and it seems that Yameen’s wrongdoings are catching up with him as Yameen was convicted and sentenced to 5 years in jail for money laundering. He was accused of receiving $1 million of government money through a private company.

Yameen was accused of receiving $1 million of government money as part of a deal to lease a number of tropical islands for hotel development. Judge Ali Rasheed, who headed a panel of five judges trying the case, told the criminal court it had been established beyond any reasonable doubt that Mr Yameen had taken money that he knew was embezzled from the state. “The judges took over 10 days to deliberate on this and this is the unanimous verdict of the five judges,” Judge Rasheed said.

It wouldn’t be far-fetched to say that Yameen attempted to sell his country off. China first signed a Free Trade Agreement with Pakistan and Maldives is the second country to have signed an FTA with China. The FTA was presented in the Maldives Parliament for just one hour before it was ratified amidst stiff opposition as the FTA would have essentially made the Maldives a Chinese colony. “The trade imbalance between China and the Maldives is so huge that nobody would think of an FTA between such parties”, said former President Nasheed. He also called it a “one-sided treaty”.

Indeed, Chinese exports to the Maldives account for more than 99% of the total trade between the two countries. This giant trade deficit is already too much to sustain for the island nation. Chinese debt has increased due to inconsiderate infrastructural projects cleared by the country’s previous pro-China government. Also, the passage of a liberalised land acquisition law in 2015 which allowed foreigners to own land in perpetuity, if they invested more than $1 Billion and reclaimed 70% of it from the sea, made an easy way for dozens of Chinese and other foreign companies to benefit. The geopolitically crucial nation, with a population of only a little over 400,000, owes an equivalent of 25 per cent of its GDP to a superpower, China. However, Maldives President Solih immediately after getting elected made it clear that that the new Maldivian government will not go forward with the Free Trade Agreement with China.

Yameen ruled the Maldives with a heavy hand as he systematically dismantled every democratic institution and also put his detractors in jail. In 2013 he won a shock victory with just over 51% of the vote, amid allegations of a rigged election. He then jailed the Chief Justice of the Supreme Court along with his eighty-year-old half brother and former ruler of thirty 30 years, Maumoon Abdul Gayoom. He declared a state of emergency preventing the parliament from removing him. Yameen even made constitutional amendments that favoured the Chinese. He disqualified and jailed the Maldives first democratically elected President Nasheed. Nasheed fielded his close aid Ibrahim Solih against Yameen and the former prevailed over Yameen. GMR, an Indian company was removed from developing the Male airport for a Chinese company under the Yameen administration.

Thankfully for the Maldives, Yameen was ousted in 2018 and had Yameen returned to power, Maldives as we know it would have ceased to exist. Yameen is finally reaping what he sowed as the Maldives restores its sovereignty.