India has already vowed support to the island nation 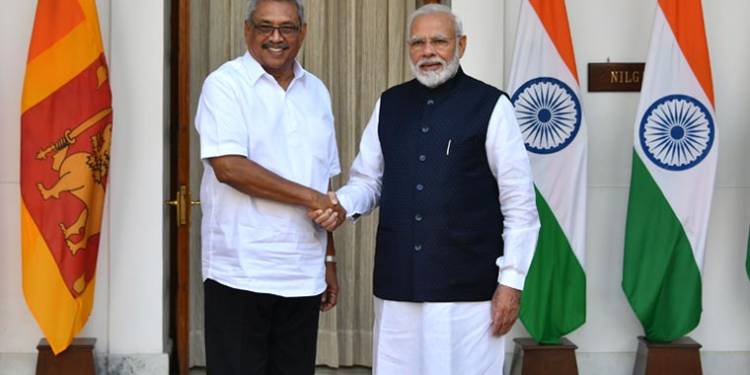 Sri Lanka, the island nation on the Southern border of India, has got a new government. The newly elected president, a member of Rajapaksa family, Gotabaya Rajapaksa, visited India to discuss the bilateral ties, and the course of a shared of future.

Many ‘foreign policy experts’ in the country were worried that after Rajapaksa’s win, Sri Lanka will tilt towards China once again. However, contrary to that, Gotabaya Rajapaksa has taken many pro-India steps. In his first visit to India as president, Rajapaksa has suggested some ideas on how India, with the help of other countries, can counter CPEC.

In the first interview to a foreign media outlet after election, with Suhasini Haider of The Hindu, Rajapaksa said that his government wants India’s help, to counter the threat of ISIS and Islamic terrorism in Sri Lanka. “The threat in Sri Lanka has now changed: unlike the LTTE which was a specific threat to Sri Lanka, IS [Islamic State] is a global threat posed by terrorists across the world. India and other countries have more information on this threat than us,” said Rajapaksa.

Sri Lanka was stunned by a series of bomb blasts in April this year. The island nation had asked for National Security Guard (NSG) commandos for conducting operations as well as investigations against the local terror modules. Indian security and intelligence agencies, including RAW, IB, and National Investigation Agency (NIA) helped the island nation to solve the Islamist terror attack.

Nicknamed “Terminator” by his family, retired Lieutenant Colonel Gotabaya Rajapaksa was the top defense ministry official during the days of the Mahinda Rajapaksa regime which was in power from 2005 to 2015.  Gotabaya’s historic election is perceived to be a result of the rising public sentiment towards ensuring national security.

Sri Lanka faced a major threat to its internal security after the island nation witnessed the devastating Easter Sunday attacks carried out by Islamic extremists. The bomb blasts claimed 269 lives. The terror attacks not only resulted in widespread loss of human lives, but also brought into focus the level of Islamic extremism in Sri Lanka. It must be noted that National Thowheed Jamath (NTJ), a local radicalised group had carried out the terror attacks.

This breakaway faction of the Islamist organisation Sri Lanka Thowheed Jamath had links with the Islamic State. At least one of the bombers, identified as Jameel Mohammed Abdul Latheef, is said to have visited the ISIS recruiters in Syria in 2014. This shows the level of Islamic extremism within the island country. And this is not a new issue that has cropped up in Sri Lanka.

The spread of Salafist Islam started spreading in Sri Lanka way back in the 1980s. It is a version of Salafist Islam only, which is believed to support violent extremism. Its followers have intra-faith tensions with the Sufis. In 2006, an ugly episode of persecution of Sufis came to light when houses of more than 100 Sufis were burnt down.

A strongman like Rajapaksa is required to save the country from Islamic terrorism. Given India’s expertise in fight against terrorism, India will be ‘key ally’ in Sri Lanka’s fight, under the leadership of Rajapaksa family.

Spearheading the Sri Lankan forces against the LTTE during his tenure as the Defence Secretary, Gotabaya Rajapaksa is credited for effectively combating the Tamil Tigers and ending the 37-year long civil war. His success in ending the civil war made him a “war hero” within Sri Lanka. 40,000 people died in the war, and the Sri Lankan government was accused of carrying out gross human rights violations.