US takes a leaf out of Communist China’s book 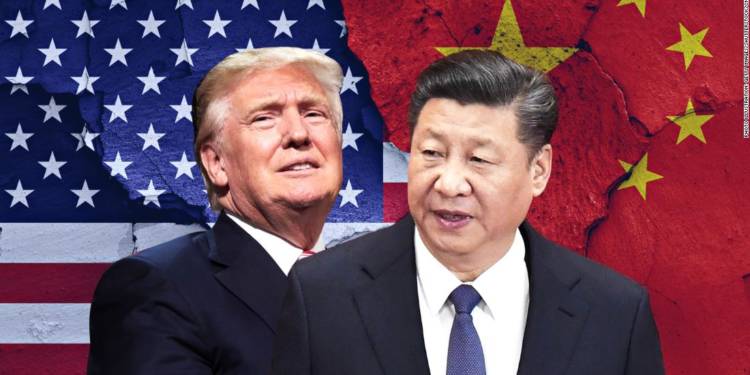 In the backdrop of an ailing Chinese economy that is currently battling the Coronavirus epidemic which has taken the shape of a near apocalypse, the US is pushing for greater influence and space in the African Continent.

Realising the opportunity arising out of China’s almost unmanageable troubles, Trump administration is pushing for greater influence in the region. The US Secretary of State, Mike Pompeo visited Africa last week to counter China’s growing influence in the Continent.

The fact that this is Pompeo’s first visit in the nearly two years of his assuming office shows how the US has realised that this is the opportunity to counter China’s expanding influence. Pompeo visited Senegal, Angola and Ethiopia- three countries in which the Dragon has invested billions of dollars into infrastructure projects.

During his visit, Pompeo constantly attacked China’s debt-trap diplomacy. In Ethiopian Capital Addis Ababa, he issued a warning asking the African nations to be “wary of authoritarian regimes with empty promises”. He added, “they breed corruption, dependency, they don’t hire the local people, they don’t train, they don’t lead them”. With this remark about authoritarian regimes, he was clearly taking a dig at Beijing.

In Anglos, the US Secretary of State was even more forthcoming in criticising the Chinese “debt-trap diplomacy”. He said, “We don’t impose debt burdens that nations can’t resolve. You suggested somehow this was different than the Chinese model. I’ll leave others to make that analysis, but I can tell you how America operates.” He added, “When we come, we hire Angolans. When we come to Angola, we show up with money that will benefit the Angolan people.”

Washington’s officials have been critical of China’s debt-trap diplomacy in Africa in the past. In his veiled references, Mike Pompeo gas highlighted similar concerns. China’s debt-trap strategy has caused massive outrage in Zambia. The neighbouring country, Mozambique too owes over 2 billion dollars in debt to Chinese.

China has major investments in infrastructure projects in countries like Kenya and Djibouti too. However, the US is looking to make inroads at a time when the Coronavirus outbreak has taken a major toll at the exports-based Chinese economy.

Currently, some of China’s biggest cities are under lockdown. Chinese industries are going to be hit hard by the current crisis triggered by the Coronavirus infection. By some estimates, its economic growth is set to drop down to 3.5 per cent due to the airborne disease.

China’s Coronavirus woes keep mounting. As of now, 78,000 people have been infected by this novel virus in mainland China while 2,700 have died, according to official estimates. As China has emerged as the source of this novel virus, no county wants to deal with Beijing. Its exports have come to a standstill as other countries remain reluctant to interact with the Dragon or to buy its products.

Even if we go by the downplayed official estimates, the Chinese economy would find it hard to recover from here. The Coronavirus outbreak is proving to be a big drain on the exports based economy, constantly debilitating it. By the time China returns to normalcy which might take another six months or so, its economy would have deteriorated only further.

The Trump administration seems to understand that this is the moment to occupy the space that Beijing is acceding owing to its internal troubles. It remains to be seen as to what set of policies it adopts in its geopolitical ambitions to counter Chinese influence in the region.

It has two options even as it tries to rid the region of Chinese “debt trap” diplomacy, it can either:

The former has failed and wouldn’t work in Africa either. It will have to earn the goodwill of the African regimes, by whatever means it finds fit. The US must try to offer a viable substitute the Chinese investments in the region- one that doesn’t carry along with it the baggage of exorbitant debts that tend to create an awful and unmanageable debt-to-GDP ratio. In a continent that is starved of quality infrastructure, Washington can earn a lot of goodwill with the African dictators and leaders by offering affordable infrastructure solutions in the region.

Attempts to replace China as the leading superpower in Africa are that much more practicable given that China’s ambitious Belt and Road Initiative (BRI) is in itself embroiled in quite a bit of trouble.

The ambitious project, wherein China has invested close to a massive 1 trillion US dollars has failed to take off primarily because of the domestic opposition in several countries given Beijing’s intentions to colonise poor countries in the garb of infrastructure development.

In Indonesia, for instance, more than 240 civil society organisations urged the Indonesian government to investigate the “extremely suspicious” death of an activist who opposed the building of a hydropower dam seen as key to China’s Belt and Road Initiative in the country. Lawyer-activist, Golfrid Siregar who was murdered in October is believed to have turned out to be a thorn in China’s BRI and had to pay the ultimate price for the same.

The ambitious project is also facing trouble on other accounts. The Chinese-Pakistan Economic Corridor (CPEC), a flagship initiative of the Belt and Road Initiative, has, for instance, slowed down and got delayed extensively because of corruption allegations and other irregularities.

China has invested a lot in BRI. Beijing’s Forex reserves stand at just above 3 trillion US dollars. This gives a measure of the ambitious infrastructure investments that China has made under the BRI. But with projects getting riddled with roadblocks across several countries, China already faces an uncomfortable position. Things are going to get further derailed with the Coronavirus outbreak. As long as these infrastructure projects do not become operative, Beijing will not be able to garner the massive profits that it aspires to earn.

Extensive delays will eventually lead to cost overruns that will spell further trouble for the Chinese economy. Slowly, BRI itself might become more of a liability than an asset for the Chinese. In such circumstances, it makes all the more sense for the US to attempt and make forays into the African Continent.

Meanwhile, New Delhi must also understand that this is the time to leverage China’s constantly weakening position. Beijing’s economic expansionism has come to a grinding halt and has also got riddled with domestic issues in several countries. India must look to expand its presence especially in the strategically located parts of the world that have of late become a point of competition between India and China such as the Vanilla islands in the African Continent.