More than 20,000 cases in Russia in just 2 days: After months of hiding its Coronavirus cases, the truth is finally out

Russia is so done 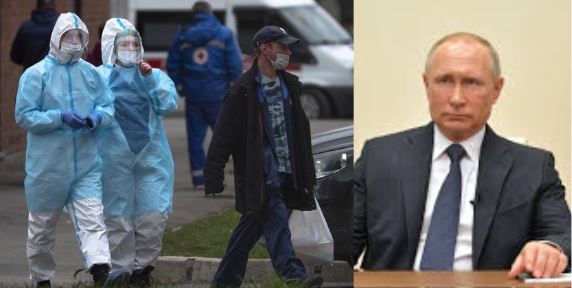 One of the biggest revelations of the COVID-19 Pandemic has been the tendency of the Red Authoritarian regimes to cover up failures even if it means putting the entire human race at threat of unprecedented devastation. First, it was Beijing’s Chernobyl moment as it misled the entire world about human-to-human transmission of the virus and its fatality rate, apart from hiding its own numbers in order to downplay the severity of the novel infection.

Now, Moscow too seems to have been caught with its foot in the mouth moment as the number of confirmed Coronavirus cases have risen suddenly and enigmatically in the largest country of the world.

On Tuesday, Russia recorded a rise of more than 10,000 cases for the second consecutive day taking the overall tally of the infected population to 1,55,370. On Monday, the country recorded as many as 10,633 new cases and a day later the country again recorded 10,102 new infections showing how badly the country has been hit by the Pandemic that originated in its neighbouring country, China.

Moscow seems helpless in the face of rising infections and only last week Russian Prime Minister Mikhail Mishustin also tested positive for the novel Coronavirus. While the death count hasn’t gone up drastically with 1,451 fatalities and 95 new fatalities recorded on Tuesday, expect the number of deaths to go up in the coming days because of a huge number of infections, the outcome of most of whom is still unknown.

To be very specific, the number of deaths in Russia are not its fatality rate but only the ‘Case to Fatality Ratio (CFR)’ that can go up sharply as and when the outcomes of the infected persons are known.

Front-line workers within Russia are also facing threats of harassment with reports of health workers mysteriously falling out of hospital windows and two such deaths in the past two weeks triggering fears of hostile working conditions of doctors in the Coronavirus-battered country.

Russia has revealed a sudden surge in the number of cases in the country, but then Russia seemed well-off not too long ago. By the end of March, Russia had been claiming as few as 1,264 confirmed cases, a number that was particularly lower than some of the worst affected parts in the world at the time- Iran, Italy, parts of Europe and also the United States.

But today, Russia has left both Iran and Turkey behind in terms of the number of Coronavirus cases, and going ahead it is also likely to leave behind other hard-hit European countries- the United Kingdom, France, Italy and Spain.

But Russia had closed its borders when it had only 1,264 officially confirmed cases and had also started imposing lockdown measures- why did then the number of cases rise all of a sudden? The fact remains that till now China, followed by Europe and the United States have successively emerged as the epicentres of the COVID-19 outbreak.

But going by the present projections, it seems that Russia is on its way to become the new epicentre of the outbreak something that couldn’t have been anticipated given the number of cases Russia was revealing only weeks ago.

Moscow, the capital of Russia happens to be the worst-hit with more than 80,000 cases and it seems that the world is suddenly realising that a particular part of the world is hit far more severely by the novel virus than we could ever imagine. Both St. Petersburg and Moscow are under lockdown, even as the authorities grapple to contain the Pandemic.

Moscow’s cover-up of Coronavirus cases is not very different from Beijing’s cover-up, as both of them being radically socialist and authoritarian regimes have nothing to boast about against the free world, except the false perceptions of good governance and efficiency that are falling flat in the face of the ongoing Pandemic.

The battle against Coronavirus has to be a joint battle and not specific to every single country if it is to be faded out as a whole and a recurrent wave averted. However, it seems that months after Beijing’s cover-up got exposed, it is Russia which is getting exposed every which way.

Days ago, Russia’s closely guarded ‘secret’ nuclear cities got exposed and now it is also getting exposed for hiding the number of cases, with a sudden spurt in cases that bears signs of mystery and cover-ups.

‘If you don’t spend $200 billion, we’ll terminate it,’ Trump threatens to pull the plug on US-China trade deal