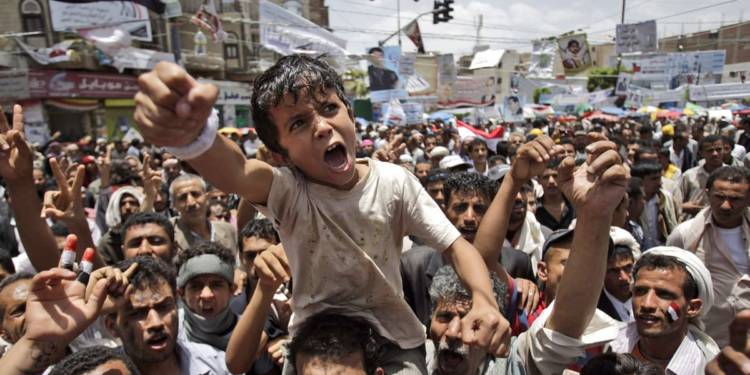 The Arab world, with a population of around 43 crore and an economy of 2.8 trillion dollars- equal to India’s- forms an important region on the global civilizational map. The region has long been characterized with oil economy, conservative Islamic practices, and authoritarian regimes.

The first time the region witnessed a large scale protest for democratic rights was in early 2010s, exactly a decade ago, after the global economic slowdown, which ravaged the Arab economies. The Arab Spring (December 2010- December 2012) was a response of citizens living in poverty under oppressive regime; and after the economic slowdown worsened their welfare, they took the roads to protest.

The protests were primarily concentrated in Northern African countries like Libya, Egypt, and Yemen initially, and spread to Syria and Bahrain, where the existing regimes were topped or a civil war broke out. But, protests took place in almost every other Arab country including Saudi Arabia, and even Iran felt the heat.

The primary reason behind the protests were worsening economic conditions after global economic slowdown in late 2000s, and social media played an important role in the outbreak of coordinated protests.

Now, in the times of Corona, when the economy of majority of Arab countries is ravaged and countries like Egypt are being forced to go to IMF to save them from bankruptcy, the region could again witness a similar protest.

The Arab Spring started in December 2010 but in this decade of 2020s, it might start a bit early, as soon as the Coronavirus induced lockdown in lifted. Gilbert Achcar, a professor of development studies and international relations at SOAS University of London, who wrote a critically acclaimed books- Marxism, Orientalism, Cosmopolitanism (2013), The People Want (2013) and Morbid Symptoms: Relapse in the Arab Spring Uprising (2016), in a recent interview said, “the entire region faces an even deeper social and economic crisis than what it has been in for the last decade.”

“Once the pandemic is over, we should expect a resumption of struggle on an even higher scale due to the worsening of the social crisis. Already now, a resumption of the movement in both Lebanon and Iraq has started. People in Lebanon have been driven to do so by the collapse of the economy. They can no longer afford their basic needs like food,” he added.

The rulers of the Arab countries never cared for problems of common people, a trait typical to authoritarian countries and monarchies. The last unrest, that is, Arab Spring, could not make much impact on rich countries like Saudi Arabia, as their economies were sailing through given the fact oil prices had not sunk; the poorer Northern African countries were much affected.

But this time, oil dependent richer countries Saudi Arabia, UAE, Oman, and Bahrain would be more impacted. The fiscal deficit in these countries is estimated to reach double digit, despite the fact that countries like Saudi Arabia have already tripled the Value Added Tax and abolished the direct transfer to government employees.

Saudi Arabia, the de facto leader of the Arab world, could be taken as example of how the Coronavirus induced lockdown and oil slump is destroyed the economy of the Arab world. The detailed story of sorry state of Saudi’s public finances could be read in the following article.

Online discourse against ruling regimes has already started as the people are locked down in their houses. Writing for Israel Hayom, in a article titled A post-Corona Arab Spring, Professor Eyel Zisser argued, “It’s no surprise that people in the Arab world and beyond are already predicting, based on the simmering online discourse, that once the pandemic is over and the true economic fallout becomes clearer, another Arab Spring could erupt, no less tumultuous than the first one.”

This time the Arab Spring would not be limited to Arab countries but the neighboring nations like Turkey and Iran, which are also contesting to Saudi Arabia for leadership of Islamic world, would also be impacted. In fact, Iran and Turkey are already witnessing a massive public outrage in protest against ruling regime in the last few months. The world must be prepared for big socio-political changes in Muslims world in next few months.