A few years ago, imposing taxes in oil rich Arab economies was unimaginable. Majority of these countries earned revenue to support government finances by exporting oil and gas, and citizens were not required to pay taxes for world class public facilities. But the oil slump of 2014-16 introduced the Arab citizens to the concept of taxation for the first time when Saudi Arabia introduced 5 percent VAT in order to diversify economy and revenue sources, followed by countries like UAE.

But, the Coronavirus pandemic, which led to rock bottom oil prices and slide of Arab world currencies, has forced countries like Saudi Arabia to increase taxes and cut the welfare expenditure in austerity measures. Saudi Arabia, the de factor leader of the Arab world, has tripled VAT- from 5 percent to 15 percent- and ended the support of 267 dollars to government employees which was paid since 2018 to hedge taxation.

“These measures are painful but necessary to maintain financial end economic stability over medium to long term…and overcome the unprecedented coronavirus crisis with the least damage possible,” Finance Minister Mohammed al-Jadaan said in the statement.

The country which usually posted budget surplus since oil became a priced commodity, accounted deficit of 9 billion dollars in the first quarter despite the fact it was ‘normal’ season. In the second and third quarter, the deficit is expected to be in the ball park of 20-30 billion dollars, only to recover in the last quarter of this calendar year. 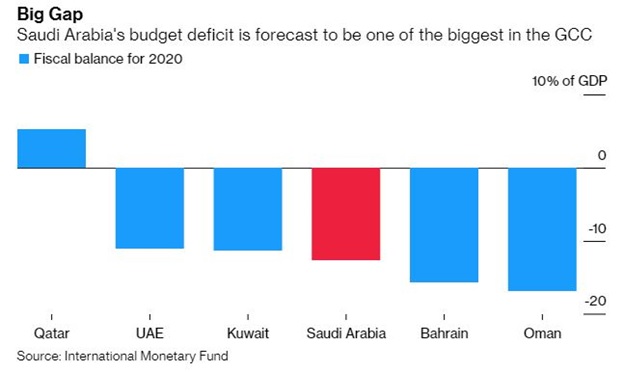 As per data from Bloomberg, the fiscal deficit of Saudi Arabia this year is expected to be around 12.6 percent of GDP, or around 90-100 billion dollars, which is one of the highest among gulf countries. Brent crude is trading at around 30 dollars per barrel while the country budgeted at 84 dollar per barrel to meet the revenue target; the foreign reserves are already depleting to support the currency against dollars; and the foreign debt markets have been used to sell bonds worth 20 billion dollar.

The country needs huge revenue from non-oil sources and has to cut the expenditure to make sure its economy is not ravaged, which could also lead to political instability, as seen during 2014-16 oil crash. “All these challenges have cut state revenues, pressured public finances to a level that is hard to deal with going forward without affecting the overall economy on the medium to long term, what requires more spending cuts and measures to support non-oil revenues stability,” said Saudi Finance minister.

Presenting the budget for FY 20 in December last year, the de-facto ruler Prince Mohammed Bin Salman announced spending of 272 billion dollars- around 28 percent of GDP- and revenue of 225 billion dollars; GDP growth at 2.3 percent and inflation at 2 percent. The public debt was estimated at 26 percent of, a healthy figure compared to international standards.

While the expenditure remains in the same ballpark- 260 to 280 billion dollars despite announced austerity measures and medical expenditure rose exponentially due to Coronavirus, revenue has collapsed due to low oil prices and global lockdown.

The government has also promised to cut oil production by 1 million barrel per day from June, and therefore, it is looking to VAT to compensate the revenue drop. The revised VAT prices and cut in DBT to government employees would be effective from July quarter.

Saudi Arabia is set to hold G20 summit in November this year, but with the dwindling economy and Coronavirus pandemic, the country will face major problems in making the event successful, instead of gaining big, as expected earlier. The Economist, the globally respected magazine (at least on economy and finance) read by the top executives of the world, did a story titled- A lost year in Saudi Arabia, and argued, “The oil crash and the pandemic have roiled plans to focus on diplomacy and growth.” Saudi is paying a big price for enjoying the leisure of big oil dependent economy.

China threatens to slap 80% import tariffs on Australian Barley, Australia is not backing down