She thinks she can fill the space vacated by Trump 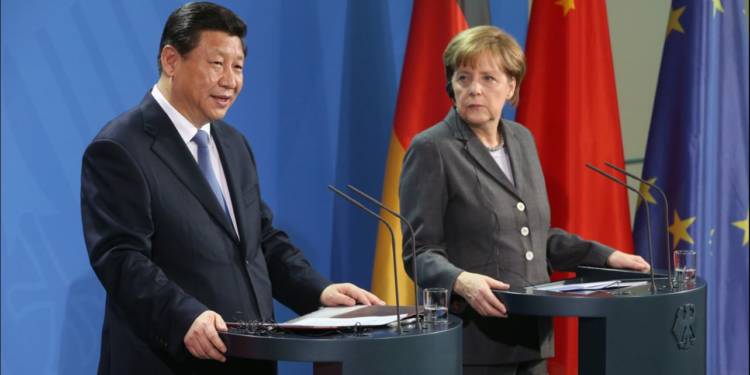 Since the last seven and a half decades of post-World War II period, the United States was the Guardian of Western Europe. It helped the war ravaged Western Europe to rebuilt itself by financing vast infrastructure projects through Marshall Plan, and guaranteed security from the Soviet Union through NATO alliance.

But after Trump came to power, the relations started deteriorating with every country except Britain, which exited from the European Union last year. Trump’s rhetoric against NATO; protectionist policies; unilateralism; and “American First” Nationalism made European leaders realize that they are on their own.

Trump stands against everything- Free trade, free movement, and rule bases liberal order- that the European Union project achieved in the history of the last seven decades. And therefore, the Union has started withdrawing itself from the American cause in the last few years, with Coronavirus outbreak accelerating the movement.

As per a recent survey, only 2 percent of Germans believe that Trump has been able to provide global leadership and 76 percent Germans said that their view has deteriorated over the years.

With American leadership out of the picture, Angela Merkel, the Chancellor of Germany, is projecting herself as the new champion of ‘Global Liberal Order’. Yesterday she took on Trump’s protectionist policies amid Coronavirus without naming him. “The answer to the pandemic can certainly not be to renationalize all international supply chains now; then everyone would pay a very high price,” said Merkel while speaking to the heads of the International Labour Organization, the International Monetary Fund, the Organization for Economic Cooperation and Development, the World Bank and the World Trade Organization- the institutions which sustained the Global liberal order for more than seven decades.

As de facto leader of European Union, the second largest economic block after the United States, Merkel is willing to step up in the space vacated by Trump in the global leadership sphere. She is projecting European Union as new anchor of multilateralism and global liberal order, and herself as its champion.

“It was … clear that multilateralism faced a major challenge even before the pandemic, and this challenge has not become smaller,” said Merkel.

Merkel managed the Coronavirus crisis very well in her country and her approval ratings are at all time high not just in Germany, but in Europe too. A few days ago, she released 500 billion Euros EU fund to fight the Coronavirus pandemic despite stiff opposition from her own party members.

But Merkel is ready to go to any length to save the European Union and therefore she agreed to the idea of 500 billion Euro fund despite opposition from her party.

To fulfill her dream as Global leader, Merkel is not shy of shaking hands with the authoritarian China. In the last few days, EU has extensively supported China at the global bodies. First it gave China entry into WTO’s alternative appellate body, to which countries like US, India are not members. Then it saved EU and World Health Assembly by proposing a watered down draft on investigation on Coronavirus which has no mention of Wuhan or China.

This draft is so ineffective that even China supported this and Chinese state media wrote that it was ‘China sponsored draft’. The original draft, proposed by Australia, demanded for an independent enquiry held China accountable, was put off the table. “Australia gets ‘slap to the face’ as global community welcomes China-sponsored resolution on COVID-19,” wrote Global Times, the mouthpiece of Chinese Communist Party after the EU draft was passed.

As Merkel stands up for the Global Liberal cause, the liberal media has already started hailing her as global leader. CNN, the mouthpiece of global liberal establishment, published a story titled- ‘How Angela Merkel went from lame duck to global leader on Coronavirus’ few days ago. The New York Times also hailed Merkel for saving EU project by sponsoring 500 billion Euro fund.

Merkel wants to make the European Union as the new representative of Western World and herself as the leader of the West, and with the space vacated by Trump and support of liberal media establishment, she is succeeding in it to a large extent. Merkel is ready save and collaborate with China and has ditched United States.

But despite all these favorable factors, one must not forget that she is sailing against the tide. With backlash against Globalization, rising protectionism and Nationalism sentiments, saving the global liberal order is next to impossible. Moreover, whatever Merkel thinks of her, but the fact remains that European Union does not have economic, military, demographic, or strategic capacity to lead the world, and therefore, they would end up as pawns in the hand of Xi Jinping and help him in the project of global Chinese domination.

No mention of China or Wuhan: EU saves China in WHO and fools the world; embarrasses Australia