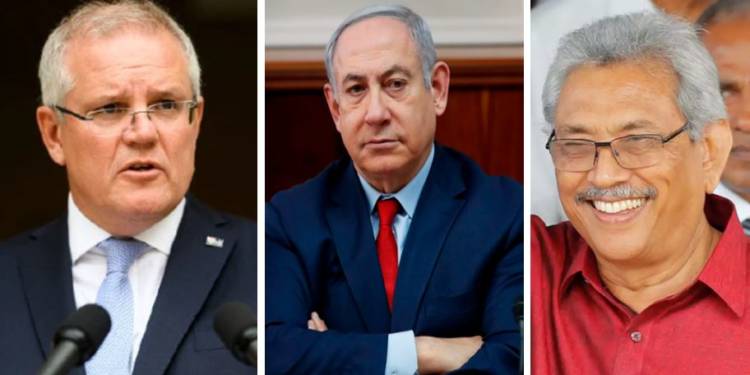 Economic costs of COVID-19 keep escalating for China, and now it seems that China could immediately lose three strategically located ports- Darwin port in Australia, the Hambantota port in Sri Lanka and the Haifa port in Israel.

This could reverse the geopolitical gains that Beijing has made in the recent past, and its maritime Silk Road project, viz. the sea route of the Belt and Road Initiative (BRI) could get seriously jeopardised.

The Dragon itself has tried to use economic sanctions to suppress Canberra’s criticism, including Barley import tariffs. But this has not stopped the Kangaroos from turning up the heat on Beijing. Now, relations between Australia and China have soured to the point of no return, and voices are being raised to take back the Darwin Port from China.

In 2015, the Northern Territory government had decided to lease the Darwin Port to a Chinese company for 99 years. This was a strategic blunder given that the Communist Party of China (CCP) now dubs it as a part of the controversial and expansionist Belt and Road Initiative.

The port is strategically located on the southern flank of the US operations in the Pacific in close vicinity to Southeast Asian nations like Indonesia. This has repercussions on the potential flashpoints between Beijing and Washington in the South China Sea. Darwin is Asia’s gateway to Australia, which is the reason why the United States felt “blind-sided” by its ally Australia.

Now, consensus is building down under to get the port back from Beijing. Liberal MP Andrew Hastie, the Chairman of Parliament’s Joint Committee on Intelligence and Security, has admitted that it was “strategically naïve” for Canberra to hand over the port to China.

Another Liberal MP, Craig Kelly has said that the Australian government should carefully consider getting out of the lease contract and if it means Australia needs to “buy that contract out”, then the port should go “back into Australian hands”.

Another port which China seems positioned to lose is the Haifa port in Israel. China had won on the Haifa port against Israel, which is seen as an important milestone in China’s BRI project. The port is in final stages of completion and will start running from 2021, before being handed over to SIPG, a Chinese government company, on a 25-year lease.

But the United States has been apprehensive from the very beginning. Last year, the US Secretary of State Mike Pompeo had warned that Washington could curb security ties with Israel over the latter’s China relations.

In the COVID-hit world order, animosity between the US and China itself has accelerated unprecedentedly, and now the Pentagon is likely to press Israel much harder on distancing itself from China.

On a recent visit to Israel, Pompeo once again asked Tel Aviv to distance itself from Beijing. The Trump administration has bolstered US-Israel ties significantly and now Israel will not be in a position to risk its strategic ties with Washington. On account of rising US-China tensions, Israel would be prompted to take back the Haifa Port from the Chinese government company.

Within the Sub-continent, the Hambantota project remains the living example of Beijing’s “debt-trap diplomacy”. In fact, this was one of the first exploits of the Dragon when it came to slipping other countries into a debt crisis.

The Hambantota project was one of the biggest reasons why Indo-Sri Lanka ties had deteriorated considerably towards the end of Mahinda Rajapaksa’s Presidential term. The project had failed to kick off, and a debt-ridden Sri Lanka had to ultimately hand over the port on a 99-year lease term to China.

However, when Gotabaya Rajapaksa came into power, he hinted at ‘re-negotiations’. It might not be possible for a tiny island country like Sri Lanka to confront Beijing directly. But if China were to lose the Haifa and Darwin ports, a Domino effect might just set in. Then New Delhi would also be communicating its concerns to Colombo and nudge the latter into taking back the port from China.

The Coronavirus Pandemic is the biggest disruptor in geopolitical equations in a long time, and it could end up robbing Beijing of three strategically located ports.