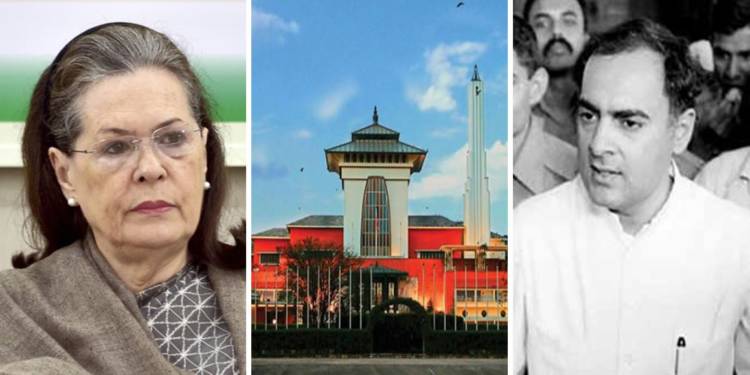 Over the past few days, the ruling Nepalese Maoist political leadership in Nepal has been making contemptible remarks against New Delhi. Led by KP Sharma Oli, the Nepal Communist Party government has taken Indo-Nepal ties to an all-time low.

While it is clear that Maoist leadership at the helm of affairs in Kathmandu doesn’t augur well for India’s interests in the landlocked country, it must be noted that successive Congress regimes themselves brought this catastrophe upon India by aiding the Nepalese Maoist leadership in its attempts to annihilate the Hindu monarchy. Once this was achieved; it wasn’t really difficult for the Chinese to make a Client State out of Nepal.

It all started with the Rajiv Gandhi government, which was a colossal blunder in India’s ties with its neighbouring countries namely Nepal and Sri Lanka. These were traditionally India’s sphere of influence, but starting in the 1980s, successive Congress regimes managed to ensure that India’s influence decreased in the Himalayan country paving way for Chinese influence.

Last year, former R&AW special Director, Amar Bhushan made some startling revelations in his book Inside Nepal. He disclosed India’s covert operation in Nepal to bring down the Hindu monarchy, paving way for establishment of a Constitutional democracy. Till today, India, and especially Rajiv Gandhi and Sonia Gandhi of the Congress party are hated by proponents of the monarchy, and those who seek to restore the Hindu Kingdom of Nepal.

This is when India’s influence in Nepal started receding for the first time as the Nepalese king, snubbed by India, chose Beijing’s help to offset New Delhi’s influence in the country.

The Rajiv Gandhi government thus managed to carve out space for Chinese footprints in a country that was always India’s sphere of influence, out of thin air. India, led by the Indian National Congress at the time, decided to continue with R&AW-led covert operations against the Nepalese monarchy.

Amar Bhushan’s book reveals that India’s external intelligence agency spent a considerable amount of time in luring Pushpa Kamal Dahal, better known as Prachanda, a Nepalese Maoist leader to put up a joint fight against the Hindu monarchy in Nepal. Dahal would later go on to lead the Nepalese Maoists in their hate campaign against India, including supporting calls for a ‘plebiscite’ in India’s Jammu & Kashmir and the Northeast.

If Rajiv Gandhi’s Nepal policy was irrational, the UPA era wasn’t even subtle about removing the Hindu monarchy and establishing the Nepalese Maoists at the helm of affairs in the Himalayan neighbour. The (Sonia Gandhi led) Manmohan Singh government depended on its coalition partners, including the Left, for survival, and BJP leader Advani even accused the UPA of ‘outsourcing’ its Nepal policy to the Communist Party of India, Marxist (CPI-M), which in turn is time and again accused of owing its allegiance to China.

In 2010, late Nepalese King Birendra’s royal aide, General Bibek Shah released a memoir “Maile dekheko darbar” that roughly translates into “The palace, as I saw it”, in which he claimed that New Delhi provided arms training to Nepal’s anti-monarchy Maoist insurgents and that he was asked to resign because he came to know about it.

Shah also wrote that when a team of Nepal Armed Police went to Chakrauta, Uttarakhand for arms training, they were told by trainers and locals that in the past other groups were also trained there. These other groups were the Maoists.

Shah dropped a bombshell by alleging that India could have incited Nepal’s royal carnage in 2001 that led to the death of King Birendra and nine other members of the royal family. The perpetrator, Crown Prince Dipendra apparently killed himself too. King Gyanendra succeeded the Nepalese monarchy.

Uttar Pradesh Chief Minister, then Gorakhpur MP, Yogi Adityanath even warned of a “Red danger” in the Himalayan country following the abolition of the Hindu monarchy in Nepal in 2008. 12 years ago, Yogi Adityanath is getting vindicated as the Chinese proxy in Nepal is raking up irredentism against India.

The Modi government understands that the Hindu monarchy in Nepal is in India’s better interest as against a Maoist regime that wants to destroy the Nepalese civilisation.

India cannot afford a relationship with Nepal that oscillates with changing regimes and in this sense the re-installation of a Hindu Constitutional monarchy in Nepal in the only panacea.

The Nepalese monarchy shared deep ties with India, and King Birendra, for example, was a symbol of tradition for Goraknath Mutt. The King looked up to Mahant Avaidyanath, former religious and temporal head of the Gorakhnath monastery, as his guru. Interestingly, Yogi Adityanath succeeded as the head of the Gorakhpur Mutt in 2014.

Both India and Nepal must understand that there was no need to change the status quo and thrust Maoism and secularism upon the Himalayan kingdom. Atheism and Maoism that have penetrated into Nepal have destroyed its civilizational roots and cultural ties with India, playing into the hands of China.

China has been more than happy to capitalise upon the Maoist political leadership. The Nepal Communist Party finds its ideals in Mao Zedong and allows the Communist Party of China to guide its internal affairs. Congress’ strategic blunders in Nepal have led to India losing a close friend in the neighbourhood to China.

Chinese army is full of wimps, sissies & little emperors. We are not saying this. This is what China thinks