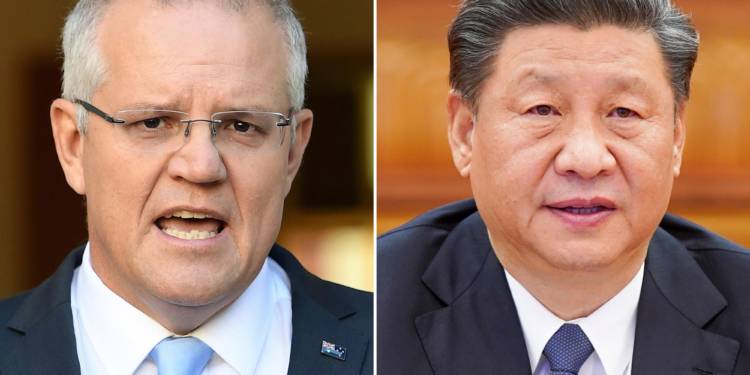 If there is one leader across the world, who has stood up boldly against China’s mishandling and cover-up of the Coronavirus Pandemic, it has to be Prime Minister of Australia, Scott Morrison. Morrison and his Ministers have been critical of China’s wet markets and have also been calling for Taiwan’s inclusion in the WHO and an independent international investigation into the origins of the COVID-19 outbreak in China- the Wuhan Institute of Virology.

Australia shares close trade relations with China, and taking jibes at Beijing means losing beneficial trade equations with the Asian giant. Beijing has started a trade war of sorts, imposing an 80% tariff on Australian barley imports and banning meat imports from four abattoirs. It has also threatened restrictions on Coal and Iron-ore imports. Morrison has not cowed down to Chinese backlash, and he intends to help move supply chains out of China. However, if ScoMo wants to win this contest against Beijing, he must rein in Chinese influence which dominates University campuses and certain State governments.

In fact, China has been using its undue influence to exploit Canberra, and has even warned Australia of a students boycott. It is very much possible that these Universities end up pandering to Beijing’s narrative.

In fact, Australian Universities happen to have a track record of succumbing to Chinese influence. Take the example of Drew Pavlou, a student activist who organised an on-campus pro-Hong Kong rally and has also been a critic of the Queensland’s University. He has been suspended by the University for two years.

Pavlou tweeted, “The University of Queensland has expelled me for two years for criticizing the Chinese Communist Party. They gave no reasoning and threatened consequences if I breached the confidentiality of their decision. I will immediately appeal to the Supreme Court.”

The University of Queensland has expelled me for two years for criticizing the Chinese Communist Party. They gave no reasoning and threatened consequences if I breached the confidentiality of their decision. I will immediately appeal to the Supreme Court pic.twitter.com/TqTdoyAAXd

In fact, Chinese student groups have been a strong influence on the University campuses in Australia. Last year, there were reports of pro-mainland China students clashing with pro-Hong Kong protesters in the campuses.

These Chinese nationals in Australia have the backing of the Communist Party of China (CCP), and China’s Foreign Ministry has explicitly backed these Chinese students running amok in Australia and violently censoring pro-Hong Kong voices down under.

But the University campuses are not the only issue, Morrison faces a bottleneck in the form of Chinese influence in the country’s body politic.

The main Opposition party in the country, viz. the Centre-left, Australian Labor Party has broadly supported Morrison’s call for an independent investigation but there are certain voices that could put him in a slightly uncomfortable situation.

The prominent Labour MP has accused Australia’s Prime Minister of exploiting the China issue politically. Putting up a disgusting defence for China, he said, “Of course, we need an inquiry but the way in which our Prime Minister went about that was offensive to the Chinese. They did believe they were being targeted.”

He added, “(Australia) didn’t need to be out there in front, offending the Chinese, and if we hadn’t done that, we might not be having some of the diplomatic relationship troubles we’re having at the moment.”

There are still many in Australia who vouch for not “offending the Chinese”. Another Labor MP, Shaoquett Moselmane, had recently praised Chinese President Xi Jinping’s “unswerving leadership” in battling the Coronavirus Pandemic.

Such adorable support for China bordering on sycophancy doesn’t augur well for Morrison’s battle to hold Beijing responsible for creating the Coronavirus Pandemic that has slipped the entire globe into a public health emergency.

These voices water down Australia’s attempts to hold China responsible for the Pandemic. The Victoria State for instance is not retracting China’s Belt and Road Intiative (BRI), which involves an $107 billion infrastructure project in Victoria. Labor leader and Victoria Premier Daniel Andrews insists on continuing with the commitment to the deal on China’s BRI.

Meanwhile, Opposition leader Michael O’Brien has promised to scrap the deal if he comes to power.

While there have also been renewed calls to scrap the lease of Darwin Port to China, Morrison faces a certain challenge as Northern Territory Chief Minister Michael Gunner has, in the past, refused to buy back the port from China.


Haifa port in Israel, Darwin port in Australia, Hambantota in Sri Lanka – The 3 ports that China will soon lose

Scott Morrison wants to hold China culpable for mishandling the Pandemic. But he faces a Deep State and extensive Chinese influence within the University campuses and Opposition-ruled State governments which he must rein in if Canberra wants to take on the Dragon.

‘D10 can destroy Huawei 5G,’ Britain wants alliance of 10 democracies including India to take on China