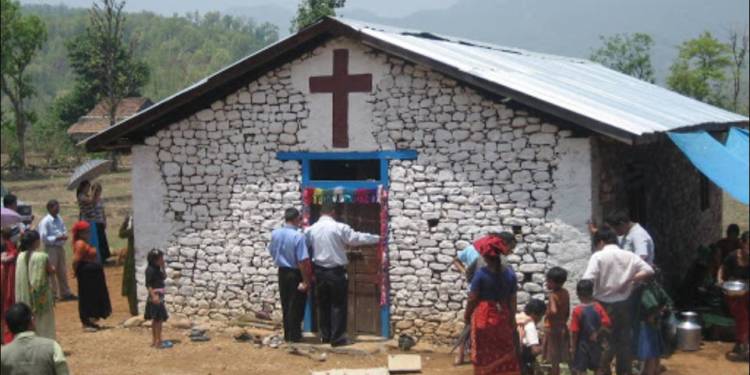 There is no doubt that Nepal and India share close cultural ties with no ill-will among the people of the two countries. However, the erstwhile Hindu Kingdom is paying the price for falling into the lap of the communists as not only is Nepal being tilted towards the Chinese Communist Party by pouring cold water over its ties with India, the Himalayan country is also witnessing a sharp rise in Christian population as the Christian missionaries are teaming up with communists to oversee a demography change in Nepal.

Ever since the Communists rose to power in Nepal, the country is heading into uncharted territories as recently, Nepal’s Prime Minister KP Oli Sharma said that, “Indian virus looks more lethal than Chinese and Italian now” as he falsely claimed that people who are entering Nepal illegally through India were responsible for spreading the Wuhan coronavirus in the country. Oli also strongly supported the distorted political map that Nepal released earlier this week. The political map is provocative – it shows India’s Lipulekh, Kalapani and Limpiyadhura, under Nepalese territory.

In 2008, Nepal officially ceased to be a Hindu state as it became secular after hardcore Unified Communist Party of Nepal-Maoist joined mainstream politics after a decade-long insurgency which saw over 13,000 people getting killed. The adoption of ‘secularism’ effectively gave a free hand to the Christian missionaries as they carried out large scale conversions.

It could be frightening as according to reports Christianity has been spreading very fast and deep in Nepal. According to a recent report, in March, Pastor Keshab Acharya was arrested on charges of giving false information for saying prayer could heal COVID-19.

While Article 26 of Nepal’s constitution forbids anyone to “convert a person of one religion to another religion, or disturb the religion of other people,” the missionaries are working in cahoots with the Communists which has seen the Christian population rise from 0.41% in 2001 to 1.42% in 2011. The number is expected to grow as the next census gets released.

The Indian National Congress is equally complicit in making Nepal fall into the hands of the Maoists. It all started with the Rajiv Gandhi government, which was a colossal blunder in India’s ties with its neighbouring countries namely Nepal and Sri Lanka. These were traditionally India’s sphere of influence, but starting in the 1980s, successive Congress regimes managed to ensure that India’s influence decreased in the Himalayan country paving way for Chinese influence.

Last year, former R&AW special Director, Amar Bhushan made some startling revelations in his book Inside Nepal. He disclosed India’s covert operation in Nepal to bring down the Hindu monarchy, paving way for establishment of a Constitutional democracy. Till today, India, and especially Rajiv Gandhi and Sonia Gandhi of the Congress party are hated by proponents of the monarchy, and those who seek to restore the Hindu Kingdom of Nepal.

Amar Bhushan’s book reveals that India’s external intelligence agency spent a considerable amount of time in luring Pushpa Kamal Dahal, better known as Prachanda, a Nepalese Maoist leader to put up a joint fight against the Hindu monarchy in Nepal. Dahal would later go on to lead the Nepalese Maoists in their hate campaign against India, including supporting calls for a ‘plebiscite’ in India’s Jammu & Kashmir and the Northeast.

Such is the fear of Christian missionaries that in 2015 even the country’s Muslims demanded that Nepal be reverted to a Hindu state as they felt more “secure” under a Hindu state rather than a secular one.

“It is to protect Islam. I have opened my mouth demanding that Nepal be declared a Hindu state in order to protect my own religion,” said Amjad Ali, chairman of the Rapti Muslim Society/

Chairperson of the Rastrabadi Muslim Manch Nepalgunj, Babu Khan Pathan said, “We don’t need a secular identity, but want to see the country called Hindu State as this ensures safety and security for all.”

According to a Swarajya report, as of 2019, nearly 10 per cent of Nepal’s estimated 30 million people are Christians due to the sustained efforts of Christian evangelists. The alarming demographic change has resulted in calls for protecting the country’s culture by declaring Nepal as a Hindu state. Nepali Congress has demanded that Hindusim be declared as the state religion and a blanket ban be imposed on conversions.

Nepal’s Prime Minister Oli himself is in touch with the conversion mafia as he attended the Asia Pacific Summit in November 2018 which was organised by Universal Peace Foundation, a South Korean NGO which has been accused of funding and promotion conversions to Christianity.

“People of Nepal got the impression that the government has come under the influence of Christian missionaries and that would boost conversions, thus changing the character of Nepal,” said opposition RPP chairperson Kamal Thapa. Oli’s move to support the controversial NGO exposed him to criticism even from within his party. Nepal also has a sizeable population of Buddhists who form 9% of the country’s total population also support a Hindu state as they have been subjects of attacks from the missionaries.

Thanks to Oli’s tacit support, the country’s Christian population is the fastest growing in the world with the evangelists making full use of the devastating earthquake in 2015 which the missionaries under the garb of relief work, converted the poor and the needy in heaps and bounds to Christianity.

“After the earthquakes, Christian missions in Chepang areas became more and more active and the number of churches is dramatically increasing,” said Italian anthropologist, Diana Riboli.

The modus operandi of the conversion mafia involves economical and material benefits along with the promise of free education in missionary schools which targets the uneducated people under the garb of “faith-healing”.

The opposition RPP also claimed that the fresh converts often are brainwashed into becoming fanatics whose loyalty lies to the Church before the country. Opposition leader Bhandari said, “This is a serious issue that will eventually pose a grave threat to Nepal’s integrity and security. The converts to Christianity owe their primary allegiance to their church, which is funded and controlled by neo-colonial powers and groups in the western nations. Nepal’s interests will be compromised if we allow conversions to go on. And the only way to put a complete halt to conversions is by making Nepal and Hindu state once again.”

Dalits have become easy prey for the evangelists as the Federation of National Christian Nepal says 65% of Christians are Dalits. It is important to note that the country listed no Christians in 1951 and just 458 in 1961. During the 2001 Census, there were nearly 102,000 Christians and  a decade later that number had more than tripled to more than 375,000. Fast forward to 2020, there are over 3 million Christians in Nepal.

The alarming drop of Hindu population in Nepal cannot be ignored. From constituting 88.87% of the country’s total population in 1952 to dropping down to 81.34% in 2011, there has been a remarkable fall which is likely to greatly increase by the time of next Census.

A reason why even the current figure of 3 million Christians is a conservative figure is because of the fact that in the country’s census, many converts were not counted as the census classified people by the faith associated with their family name.

Nepal is undergoing a serious demography change which will only further increase as the Nepalese government is becoming a Chinese lapdog. China has also brought out a demographic change in Tibet and Xinjiang by infiltrating its Han Chinese population in an attempt to eradicate Tibetan Monks and the Uighur Muslims. It will not be far-fetched to say that the Nepalese government will seek to learn from the Chinese playbook as it is in the best interest of the Chinese Communist Party to have a dwindling Hindu population in Nepal.

China wanted to encircle India with a String of Pearls. It now finds itself encircled by India instead