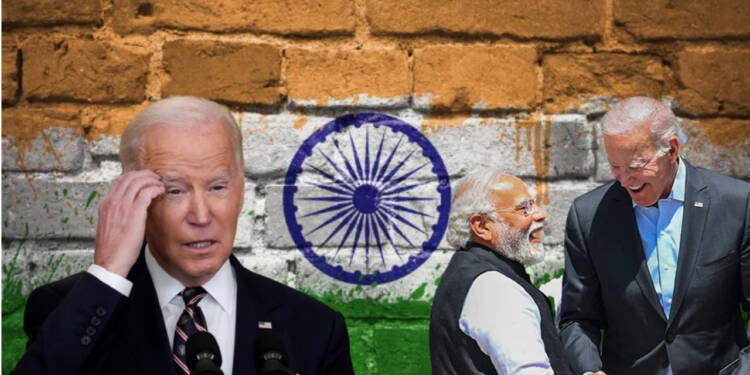 There were some really good times between USA and India as the nations were getting more supportive towards each other and were focused on improving bilateral ties. But since 2021, the US is again turning back against Russia.

The Democrats have never seen India as an emerging global power. Their anti-India stance is written and mentioned many times in history of USA. Through, wars, nuclear tests, and even internal issues, the Democrats have been opposed to India.

Now with Biden inside the White House, the course is repeating. Joe Biden is continuously trying to unsettle India from the global stage, but he is failing miserably. In the article below, we will talk about how Biden is so adamant about unsettling India.

History of USA with India

Back in history, in the 20th century, the USA tried to perturb India many times. Firstly, during the Indo-Pak war, USA was against India’s action in East Pakistan, presently Bangladesh. USA ignored the request of India to Pakistan to stop the genocide in East Bengal. Furthermore, they blamed genocide on India and even pushed the navy to support Pakistan.

Even India’s first nuclear test before Pokhran was blocked on purpose by the United States and after the Pokhran nuclear test, India was sanctioned by former US President Bill Clinton.

The relations between the two nations started to change after 2014 when India elected Narendra Modi as Prime Minister. The sole purpose of Modi during his first tenure was to improve ties with the world and make India, one of the major global players.

And Modi’s actions have borne fruits too. India and US relations started to ease, dominantly after Donald Trump was elected to the White House.

India solidified its position in major alliances such as QUAD and G20. India-U.S. bilateral relations evolved into a “global strategic partnership” because Trump was also in favour of such motions.

Read More: How India registered a famous victory at the World Trade Organization

The US Heads back to India’s enemies

As ‘Sleepy Joe’ is back in office as President, the United States now looks in no mood to extend its ties with India. Believe it or not, Biden is indeed softening to India’s enemies and restoring its old status quo.

The US recently aided Pakistan, a country renowned for requesting loans from all around the world, in obtaining another loan from the IMF. In order to reach an agreement with the International Monetary Fund (IMF), Pakistan asked the US for assistance.

Just before this, Pakistan was also removed from FATF’s grey list making it eligible for getting loans. So, quite evident that the US indeed helped Pakistan on purpose.

Not only this, but the USA is also trying to fuel India’s neighbours against India.

USA offered Nepal military alliance namely SPP (State Partnership Programme), possibly to help solidify its stance against India amidst Lipulekh concern. Although, Nepal abandoned the deal at the last minute asserting it will not accept a deal that goes against Nepal’s non-aligned foreign policy.

In addition, the US nowadays is in the mood to pressurize India over alleged human rights violations and isolate over alignment with Russia. The list of US actions against India is almost never-ending.

Well, despite all of these heinous attempts, the USA is still unable to unsettle India, why? The answer is pretty obvious, India’s rising stature across the world. Narendra Modi has become sort of a global leader with whom everyone is fond of having good relations.

India has established good terms with every nation on the globe except for some in the West, due to ideological differences. Even during the delta wave of the COVID-19 Pandemic, India continued providing assistance to the world, despite being neglected by the West at India’s most desperate hour.

The USA was agonized by the response.

Even after the Galwan clash, India made it very clear to the world that it will handle the conflict with China all alone. There have been countless examples set up by India that it’s not the same old nation. This is new India.

Read More: In a major shock to China, India is planning a regular base in the South China Sea

In conclusion, if Sleepy Joe continues his anti-India stance, he’ll lose another important. In history of USA, it has never been supportive of India, now it’s all coming back to square one. Anyways, it won’t succeed if it tries to stir conflicts between India and its neighbours because they all have an inclination to support India and these small-scale territorial disputes are fairly rare.