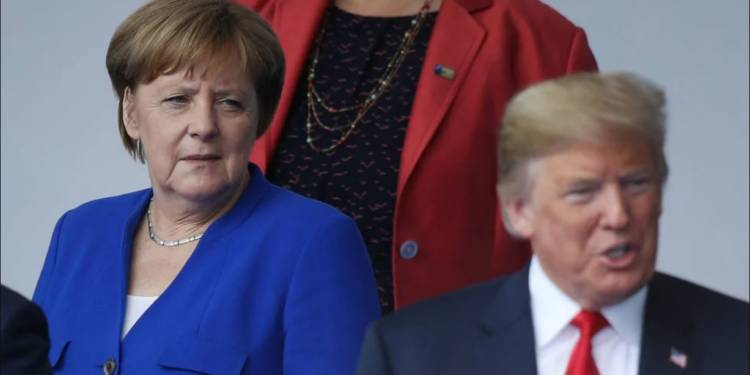 Germany’s coordinator for US ties, Peter Beyer, has criticized the Trump administration’s decision to remove 9,500 troops from German NATO base. Beyer is the Coordinator of Transatlantic Cooperation at the Federal Foreign Office in the fourth coalition government of Chancellor Angela Merkel and a member of German parliament from Christian Democratic Party- the largest party in ruling conservative coalition led by Merkel- since 2009

“This is completely unacceptable, especially since nobody in Washington thought about informing its NATO ally Germany in advance,” Peter Beyer, a member of Chancellor Angela Merkel’s conservatives, told the Rheinische Post newspaper.

Previously, Wall Street Journal reported that Trump administration decided to cut the number of US troops in Germany, a key NATO ally, by 25 percent. Currently, 34,500 American soldiers are stationed in Germany, the second largest after Japan, and Trump has decided to cut 9,500 soldiers from duty in the European country.

The decision to cut the troops from Germany signals that Trump administration does not see NATO as a unified block, the member countries of which America would provide protection, without expecting any cooperation in return. The message is that if the government in any country is not friendly with Trump administration, or rejects American leadership, like the Merkel government in Germany- their security is at risk.

After the news was reported, German foreign minister, Heiko Maas, admitted that US-Germany relations are on a decline. He said that Germany would simply “take note of” Trump’s decision rather than making any efforts to improve the ties, or talk to his American counterpart. “Should it come to the withdrawal of some of the US troops, we take note of this,” Maas told Germany’s Bild am Sonntag (BamS) newspaper.

In the last three and half years, Trump and German Chancellor, Angela Merkel did not go along on any global issue.

Trump openly endorsed Brexit which, obviously, irked German chancellor and other European leaders. Trump also opposed Germany’s asylum to Syrian refugees, to approve which Merkel risked all her political capital. All this was brewing since Trump came to power, as both leaders have very different positions on the political spectrum.

Merkel is highly popular in Germany despite the rise of the alt-right, and Trump’s stand against Germans has led to unfavorable views of America in Germany. As per a recent survey by Pew Research Centre, 57 percent of Germans do not have a favourable view of the United States and 70 percent want Germany to remain neutral in the case of Washington-Moscow conflict.

For the last seven and a half decades of the post-World War II period, the United States was the Guardian of Western Europe. It helped the war-ravaged Western Europe to rebuild itself by financing vast infrastructure projects through the Marshall Plan, and guaranteed security from the Soviet Union through the NATO alliance.

Merkel is portraying herself and the European Union as the new champion of Global liberal order after President Trump challenged the many flaws within it. And this has led to both countries into diverging paths, for the first time since World War II.