China and Russia are allies because of helplessness, authoritarianism and their shared hatred for the USA. Otherwise, the ties are riddled with distrust. 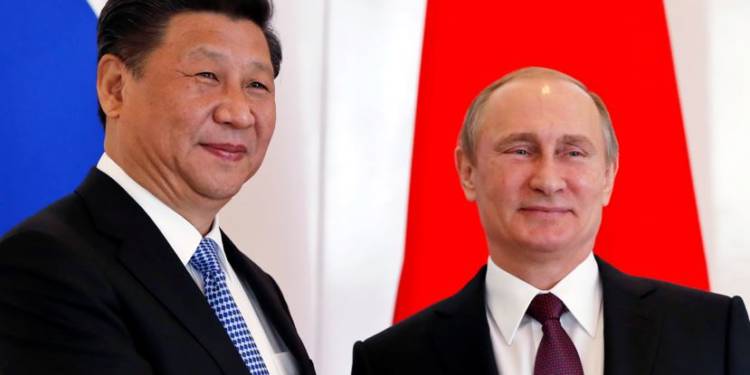 Russia over the years has emerged one of India’s closest allies despite India also being close to the USA, at a time when Russia is under crippling American sanctions. As the world battles a China-made pandemic, India has shown a decisive inclination towards the US-backed group looking to punish China for its sins especially after the intense border stand-off at the LAC. On the other hand, Russia has sided with China as there are misplaced fears that India will end up losing its all-weather ally, Russia.

While Russia and China have good bilateral relations but there is a prevalent myth that a strong friendship exists between Vladimir Putin and Xi Jinping. The only commonality between the two countries is their affinity for authoritarian regimes and the way China is stealing defense technology from Russia, it is only a matter of time before the bubble of goodwill bursts.

Russia is under crippling US sanctions which have severely dented its economy and is becoming poorer by the day. Russia has one of the best defense manufacturing capabilities but it’s unable to sell it to nations, as America has labeled Russia as an “adversary” under the Countering America’s Adversaries Through Sanctions Act (CAATSA), which has also been applied on countries like North Korea and Iran and effectively means that any major trade with these countries is problematic for countries that value the USA’s favour and friendship.

Instances of countries defying the US sanctions are extremely few and rare. In October 2018, when India inked the historic agreement worth US $5.43 billion with Russia to procure four S-400 Triumf surface-to-air missile defence system, incidentally the most powerful missile defence system in the world, the US threatened India with sanctions over its decision to buy the S-400 missile defense system from Russia.

However, the US decided against placing sanctions on India keeping in mind the disastrous effect that it would have on the bilateral relationship between the two countries with the sanctions would have forced India to tilt towards Russia, something which the US couldn’t afford. The US administration made note of the fact that India was already reeling from the decision to restrict crude oil imports from Iran and hence, decided against placing sanctions on India.

As the US started an economic and diplomatic onslaught against China, it was only natural for China and Russia to align strategically and step up their co-operation. However, not everything is hunky-dory between Russia and China.

Russia is by far China’s biggest arms supplier as the country accounted for 70% of Beijing’s arms imports between 2014-2018. Such is Russia’s desperation that it is also selling its most advanced weaponry to China as in 2015, sold six of its S-400 anti-aircraft systems, and 24 of its Su-35 fighter jets for a whopping $5 billion.

However, this hasn’t stopped China from doing what it does best: Steal. Rostec which state-owned defense conglomerate has accused China earlier this year of stealing its intellectual property.

“Unauthorized copying of our equipment abroad is a huge problem. There have been 500 such cases over the past 17 years. China alone has copied aircraft engines, Sukhoi planes, deck jets, air defense systems, portable air defense missiles, and analogues of the Pantsir medium-range surface-to-air systems,” said Yevgeny Livadny, Rostec’s chief of intellectual property projects.

China’s modus operandi is simple, buy a few jets from Russia which they can reverse engineer and make a copy which will be mass-produced for its military and allies like Pakistan. Russia can only disdain about this fact as it has been crippled by American sanctions and will be left nowhere to go if it decides to stop telling arms to China.

China being true to its characteristics has a history of stealing technology from Russia. During the 90s where it purchased the elite Su-27 fighter jets and S-300 missile systems from Russia, it reverse engineered and came up with J-11 fighter jet and HQ-9 surface-to-air missiles which were nothing but a blatant copy of their Russian counterparts. In 2017, China rolled out the fifth-generation Chengdu J-20 fighter jets which are not only copies of Russia’s SU-57E but also technologically superior.

Russia has tried, but in vain, to stop China from stealing its technologies as from pushing for bulk buying by China instead of just a few samples to attempting to earn royalties through the Chinese copies, Russia has done it all with little results.

“[Technology theft] is a shared problem for all companies who do business in China, but there haven’t been any cases of reverse engineering causing anyone turning away from the Chinese market — the most valuable market in the world,” said Vasily Kashin, a senior fellow at the Institute of Far Eastern Studies of the Russian Academy of Sciences.

Russia had been reluctant to sell the S-400 Triumf anti-missile system to China, but it did nonetheless purely as a compromise as, to put it bluntly, Moscow really needs the money.

Border dispute due to ambiguity

Much like India and China where there is a lot of ambiguity along the LAC, China similarly likes to claim a lot of ambiguous regions along its border with Russia. The two countries were on an undeclared military conflict for seven months in 1969 until a ceasefire was signed. As a result of the war, China gained control of various islands and in the Chinese Communist Party’s version of the military conflict describes the conflict as a Soviet aggression against China. Although territorial disputes remain on the back-burner since 2004, that may change given China’s tried and tested expansionist motives.

Chinese investments in the Far-East:

This is where misunderstanding and territorial tensions continue to exist between the two Red powers. This sparsely populated Russian territory boasts of abundant natural resources, and traditionally looks at it as vulnerable to Chinese influence or even colonialisation.

Today, China is eager to invest here out of its hunger for natural resources, but Russia wants to counter this dependence on China that was also writing on the wall with India’s US $1 billion line of credit to Russia for development of the Far East region.

The other huge bone of contention that will only worsen in time is China’s increasing influence in Central Asia which has historically been Russia’s sphere of influence after the breakup of the Soviet Union. As China furthers its BRI plans here, Russia is closely watching.

There is enough evidence that China and Russia are allies because of helplessness, affinity for authoritarian regimes and their shared hatred for the USA. It is only a matter of time before the friendship bubble is burst as China is fast becoming a defence manufacturer in its own might as it looks to export China-made defence equipment to other countries. In this case, Russia will be the biggest loser as cheap copies of its technology will be sold around the world by China. Putin is not someone who likes to cower down and will certainly not tolerate China’s antics beyond a point.