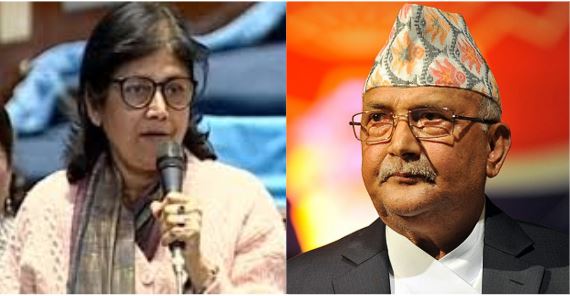 Nepal MP Sarita Giri, who went beyond the party-line to protest against Nepal’s government Constitution Amendment Bill related to the revised map of Nepal is now being attacked from all quarters, with party members demanding to oust her from the party.

MP from Nepal’s Samajbadi Party, Giri had refused to withdraw her own amendment registered against the government’s second constitutional amendment bill regarding the new map on the national emblem.

“MP Giri must take back the amendment failing which she will have to face action,” JSP leader Bishwadeep Pandey had said on Friday, last week.

Speaker Sapkota, however, decided to scrap her proposal, as per Clause 112 of the House of Representatives’ regulations, which say that any amendment to a bill cannot contradict the primary spirit of the bill itself.

After the Speaker announced that Giri’s amendment proposal had been scrapped, she boycotted the House.

The party’s chief whip Uma Shankar Argariya had issued a whip directing Sarita Giri to withdraw the proposal as the party had decided to vote in favour of the government’s amendment bill.

Sooner or later, she will be suspended from the party, all because she dared to go beyond the party-line and question an amendment which only got approval from the Nepalese Parliament through the raucous nationalistic rhetoric instilled by communist KP Oli in Nepal.

It is a tragedy on Nepal’s part that even a few of its sane voices are being silenced and cornered. The past few months have seen bilateral relations between New Delhi and Kathmandu plummet to new lows as the KP Sharma Oli government working at the behest of the Chinese Communist Party is determined to irreparably damage its ties with India.

From blaming India for the spread of the coronavirus in Nepal to passing a new map of the Himalayan nation which now includes Indian territories and to murdering an Indian farmer along the Indo-Nepal border, the Oli government has done it all.

Heavily inebriated under Chinese ‘communist’ influence, the Himalayan neighbour of India is looking to sabotage the centuries-old relationship with India that traverses religious, cultural, and familial ties.

China is trying to draw a wedge between the two historically-connected nations and with Oli at the helm of affairs, Beijing has been able to find its way around.

Oli, short-sighted by his misplaced beliefs about communism is playing into the hands of Beijing. It is not in the interest of Nepal to become China’s client state, especially because nearly 6 million Nepalese citizens live and work in India, bringing huge remittances for the Himalayan country.

Nepal is the buffer state between India and China and Beijing is leaving no stone unturned to coax Kathmandu in its debt-trap policy. Using this vile maneuver, China is looking to close-in on India from the Nepali border. From Nepal to Galwan valley to the Pangong Tso area, the disturbances China has created is well-orchestrated and interconnected to one other.

‘It is Senkaku, not Diaoyu,’ Amid Indo-China tensions, Japan sends a clear message to China