It could become a barren land 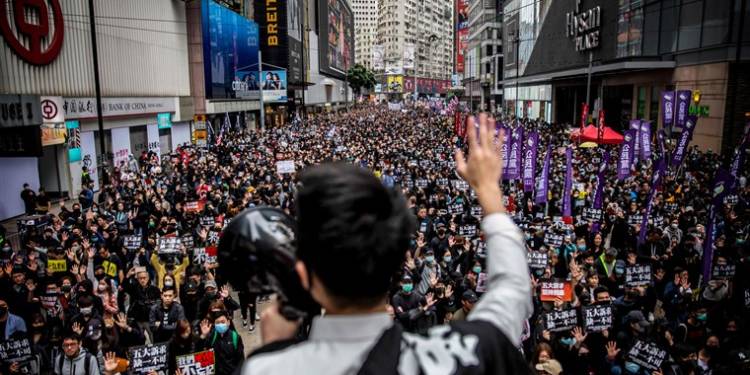 The Law of the People’s Republic of China on Safeguarding National Security in the Hong Kong Special Administrative Region, or the controversial National Security Law that it is being called worldwide, came into effect in Hong Kong last night, effectively ending the free and autonomous nature of the city, which was known to the world.

Now, Hong Kong is no different from other occupied regions of China which it claims to provide ‘autonomy’ to, like Tibet and Xinjiang. Promulgated on late Tuesday night, the law, which was brought into force by the CCP by bypassing Hong Kong’s legislature, criminalizes “acts of secession, subversion of state power, terrorist activities, and collusion with foreign or external forces to endanger national security.” Essentially, all political activities which the CCP does not like, are now forbidden in the erstwhile autonomous region, which China claimed is still operating under the “One Country, Two Systems” policy.

Hong Kong is all set to witness a mass exodus of citizens out of the city, now that the stringent National Security Law has been enforced. Among those who are expected to leave Hong Kong are the protestors and pro-democracy activists of the erstwhile autonomous city, who participated in the large-scale protests against the CCP last year.

The world community too, is stepping up to the plate, by opening its doors to Hongkongers who no longer feel safe residing in the city, and who have a risk of facing persecution at the criminal hands of the CCP.

The United Kingdom is leading the charge in this sense and is all set to provide an additional 2.5 million Hongkongers with BNO passports. UK Foreign Secretary Dominic Raab said the country would move to scrap the six-month stay limit for BNO holders if China goes on to officially implement the law. Meanwhile, the Foreign Secretary, on the floor of the Parliament today, has announced that existing 3.5 million BNO holders would directly be eligible for residency and citizenship in the UK, a feature which they were earlier deprived of.

British Prime Minister Boris Johnson last month stated that he would introduce “one of the biggest changes in our visa system in British history” if Beijing imposed the national security law on Hong Kong, bypassing the city’s legislature. Now that the said law has been imposed on the city, the UK is not wasting a single wakeful moment in ensuring the safety of Hong Kong’s residents and is opening its gates for potentially over 5 million people from Hong Kong to ultimately reside in the country.

What is the BNO, and what’s about to be different about it now?

The British National (Overseas) passport, or the BNO, is an exclusive travel document provided to a substantial amount of Hong Kong’s residents, born before June 30 1997, which allows them visa-free travel to the UK and a stay of up to six months in the country. It must be remembered that the British had handed over Hong Kong to China in 1997, under the Sino-British Joint Declaration, and an essential term of the said declaration was that China would uphold, and not infringe upon the rights and liberties of Hong Kong.

As is visible, China has broken the cardinal condition of the agreement, which has forced the UK to now bring in drastic changes in its BNO passport policy, and has made it a ticket for Hongkongers who no longer feel comfortable in the city, to avail British citizenship. Now that China has implemented the draconian law, the six-month limit on the stay of Hongkongers in the country is all set to be waived off by the United Kingdom. Essentially, 3 million citizens of Hong Kong are about to be provided refuge/asylum by the UK, while 2.5 million others will now be able to apply for the BNO passport.

Is the UK the only country coming to the rescue of Hongkongers?

No. As a matter of fact, Australia had earlier last month displayed its eagerness at helping those citizens of Hong Kong who would like to settle down under. Australian Department of Foreign Affairs and Trade spokesperson said, “Outside the current Covid-19 restrictions, Hong Kong people can apply for a range of relevant visa categories to work and live in Australia. Our people-to-people links include close family connections, business ties and shared values. These and the considerable talent in Hong Kong underscore why we continue to welcome Hongkongers to Australia.”

Taiwan is leaving no stone unturned to prove itself as a responsible sovereign country, which is well-equipped to help disgruntled people looking for safer regions of settlement after their original homes were turned into a CCP circus. Taiwan’s China-policy making Mainland Affairs Council had announced the creation of a special and dedicated department on June 18 “to correspond to the CCP’s imposition of the National Security Law on Hong Kong, an action of which has caused unrest in its society.”

Now, an office called the ‘Taiwan-Hong Kong Office for Exchanges and Services’ has begun operations today, and “It aims to provide friendly and streamlined services and basic care for Hong Kong citizens arriving in Taiwan in need of assistance, as well as for Hong Kong-based multinational companies and international corporations relocating to Taiwan,” the Mainland Affairs Council said in a statement.

U.S. Senators Marco Rubio (Republican) and Bob Menendez (Democrat) along with Senators Todd Young (R), Ben Cardin (D), and Jeff Merkley (D) introduced the Hong Kong Safe Harbor Act. According to the said Act, Hongkongers will now be eligible for Priority 2 Refugee status in the US. Further, after the enactment of the said Act, there will be no numerical limitation on the number of Hongkongers who can apply for and be granted asylum in the US. Further, if Beijing revokes the residency of Hongkongers for applying for refugee status or a U.S. visa, then those individuals will remain eligible for refugee status as victims of political persecution.

“Following last night’s implementation of Beijing’s National Security Law, the U.S. must help Hongkongers preserve their society at home and find refuge for those who face persecution for exercising the rights once guaranteed under the Joint Declaration. Through the Hong Kong Safe Harbor Act, our nation would offer a safe-haven to many Hongkongers who have tirelessly fought against tyranny,” Senator Marco Rubio said. Earlier, US Secretary of State Mike Pompeo had said that the US was considering to allow Hongkongers who no longer “feel comfortable” in the city, to move to the US.

Hong Kong about to change forever

According to data from 2011, Hong Kong had a total population of 7 million people. The UK has already granted BNO passports to close to 3 million Hong Kongers, and another 2.5 million of them are now eligible to apply for the same. Taiwan has set a special office to help Hong Kong’s citizens migrate to the Republic of China, which by the way, is also under the CCP’s hawkish eyes, and upon which an annexation could be attempted anytime. US and Australia too would be taking in scores of people who no longer want to live in Hong Kong. Therefore, who remains in the city? This is the reason why we believe that Hong Kong, in the very near future, is about to witness a large-scale exodus of people.

The CCP might not have foreseen such a situation. However, with its gifting Coronavirus to the world, and acting excessively belligerent in its immediate neighbourhood, no sane country is willing to tolerate China’s whims and theatrics any longer.