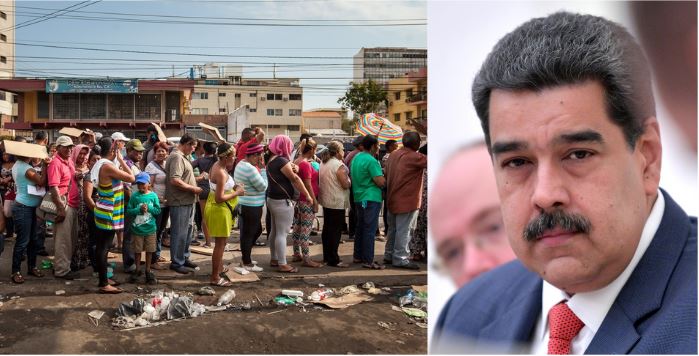 The entire world is today focused upon China. The Communist country has created one of the worst Pandemics in several decades, killing hundreds of thousands across the world. Moreover, its Salami Slicing tactics of expansionism in the South China Sea and the Himalayas is pushing the world towards a potentially grotesque conflict.

But while the entire world looks at Beijing with hostility, a new crisis is now brewing in Latin America. Venezuela, once the richest Latin American country with the largest oil reserves in the world is in the middle of a crisis, after a UK court denied Venezuela access to its 1 billion dollar-worth gold reserves. The court held that the UK government “unequivocally recognised” the Opposition leader Juan Guaido as Venezuela’s president.

The key observations came up during a case lodged by the Banco Central de Venezuela- the Central Bank of the Latin American country.

The Maduro regime in Venezuela wanted to access its gold reserves in England amidst the ongoing Pandemic. But the Bank of England was unable to act. It stated that it was “caught in the middle” of competing claims for Presidency after the disputed and inconclusive elections in the country in 2018.

This comes as yet another jolt for the crisis-ridden Venezuelan economy.

Venezuela has vast oil reserves, yet the poverty rate have skyrocketed to more than 80 percent and even mere essentials such as meat and milk have become luxury commodities with exorbitant prices.

Things started going downhill for Venezuela in 1999 when the populist leader Hugo Chavez took over as the country’s President. His radical socialist ideas- unsustainable subsidies and “artificial pricing”, that is, setting prices himself instead of letting the market forces decide inflicted irreparable damage upon the country.

Resurgent oil prices in the late 90’s enabled the government to spend freely on subsidies for its citizens without much thought, as it seemed that the demand for oil wasn’t going to dwindle anytime soon.

However, his actions threw local industries and even farmers out of business. Venezuela had to start importing food-grains. Initially, the prices remained low, financed by the booming oil industry. But the socialist edifice and abhorrence to foreign investment has destroyed the oil exploration industry too. The global crash in oil prices devastated the economy.

The incumbent- President Maduro hasn’t tried to rectify the errors committed by his predecessors. The populist leader is, in fact, trying to replicate the policies of Chavez. When it comes to hunger, he has an awkward solution.

He came up with Plan Conejo or ‘Plan Rabbit’ to end hunger. In his view rabbits would be an excellent source of protein for the large number of people who don’t have regular access to chicken. Hungry Venezuelan children are literally forced to eat rabbits.

As it happens with every radical socialist system, an economic crisis ultimately turns into a political stalemate and anarchy. In 2018, the Presidential elections in the country were boycotted and remained inconclusive. Maduro was accused of usurping power and Juan Guaidó, who is head of the National Assembly, declared himself interim president on January 23, 2019.

Today, Venezuela doesn’t have an internationally recognised leader. The international community is divided on expected lines- the UK, the US, most of Latin America, the European Union countries, Australia, Canada and Israel support Guaidó.

On the other hand, very few countries, including Russia, China, Iran, Cuba and Turkey continue to recognise Maduro. The economic crisis has taken the shape of a social and political crisis. Maduro faces popular protests but he is not ready to give in and uses brute force to contain such demonstrations.

Last year, a video had surfaced in which armoured National Guard vehicles could be seen mowing down protesters in the streets of Caracas.

Anarchy is an old issue with Venezuela now. Police personnel and military troops are deployed in containing popular protests against Maduro. Crime rate is going up exponentially but the citizens are left to fend for themselves.

Maduro remains defiant though he has lost favour both within and outside the country. With sanctions, the US has put the Maduro government in the league of rogue states like Cuba, Syria and North Korea.

Today, Venezuela has got impoverished to the extent that it has to request Iran to lend a helping hand for restarting its gas pumps and ensuring that the nation with world’s highest oil reserves does not run out of gasoline.

Venezuela is fast becoming a lesson for the rest of the world. What starts as populism and radical socialism soon turns into destitution, followed by electoral disputes, virtual dictatorship, police-protestor clashes and more crises.

While China is trying to violently disturb the status quo in the Indo-Pacific, the world must also wake up to the crisis borne out of populism and radical socialism in Venezuela.