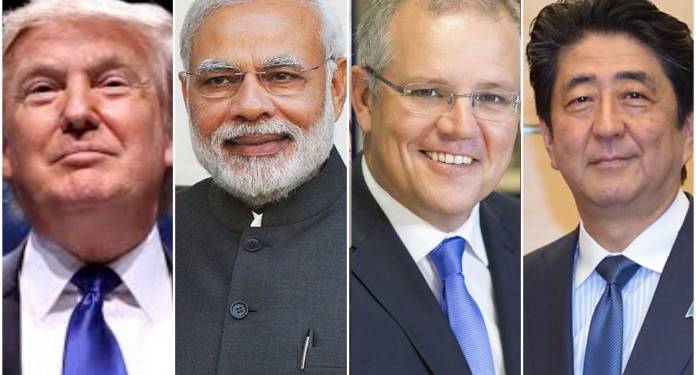 In a strong message to China, the Quad- an informal strategic grouping consisting of the US, Japan, Australia and India is coming together in India’s backyard.

New Delhi has planned to invite Australia to join Exercise Malabar- an annual joint naval exercise. Bloomberg has reported that the navies of the four countries will conduct the joint exercise at the end of this year in the Bay of Bengal.

According to Bloomberg, India will extend a formal invitation to the Australian government next week following government clearance and consultations with the other two partners- Japan and the US.

More than anything this is a major departure in India’s China policy. Australia has been keen on joining this joint naval exercise for quite some time. However, India was keeping the Australia card close to its chest until now, reportedly because of the possibility of negative reactions from Beijing. But not any longer.

China has become more belligerent than ever. Every single Quad country is engaged in military and trade tensions with China. India has, of course, been caught up with China in a military build-up at the Line of Actual Control (LAC) in Eastern Ladakh.

Japan itself has been tackling Chinese vessels that have been hovering around the Senkaku Islands of Japan. Tokyo itself has been more assertive about protecting its territorial waters and islands from a revisionist Beijing.

As for Australia and the United States, trade tensions have been enough of an impetus to contain Chinese expansionism. Trump has realised that China is the real threat to a Washington-led free world order. Over the past few years, he has been engaged in an acrimonious trade war with Beijing.

Australia too wants to reduce its dependence on China especially due to the recent events. Beijing has been slapping tariffs on Australian products- barley and meat as Canberra has been demanding a fair inquiry into the origins of the Coronavirus Pandemic.

And then all the four countries are like-minded democracies with a common goal “to keep the Indo-Pacific free and open.” China’s salami-slicing tactics in the South China Sea are however a threat to this common goal.

Beijing’s nine-dash line theory encircles 90 per cent of the strategic waters in the South China Sea, including the international waters and maritime territory of other countries, as Chinese territory. This is a direct threat to the prolific trade routes of all the four Quad members.

The fact that the four Quad is getting completed at a military level shows that a military build-up to hamper China’s Blue-water Navy ambitions is taking place.

Derek Grossman, a researcher at the Washington-based RAND Corporation and an expert in US Intelligence community said, “It would send a significant message to China that the Quad — U.S., Australia, Japan, and India — are de facto conducting joint naval exercises, even if not technically conducted under the auspices of a Quad event.”

It makes sense for the Quad members to have come up to this level gradually as opposed to the option of a knee-jerk reaction.

Chinese expansionism in the Himalayas, the East China Sea and the South China Sea has built a strong case for the Quad to be unleashed with all its might.

It is well recognised that in the interest of international peace and security, China must remain a green-water Navy, one that cannot exert influence beyond its littoral zone.

In fact, mobilisation to contain China has been already happening. The Quad countries have been becoming more and more intertwined, interlinked and interdependent.

India has signed military logistics sharing pacts with the US and Australia. It is also eyeing a similar agreement with Japan.

Australia and the US also cooperate in the Pacific as a part of the ANZUS Pact, formally called the Pacific Security Treaty amongst Australia, New Zealand, and the US.

Japan itself shares deep military ties with the US, and is now considering expanding military cooperation to include countries like India and Australia.

Viewed in the background of hike in Australia’s defence expenditure and Japan’s ambitions to move away from Constitutional Pacifism, it was only a matter of time before the four countries came together on a common platform.

The location of the MALABAR exercise- Bay of Bengal too has been carefully chosen. In the event of a military escalation, Chinese warships will never have the option into the Indian Ocean through Strait of Malacca because they can be easily blockaded by India and Australia.

China wants to have a blue water navy, like India, and is looking to build the Kra Canal through Thailand to bypass Malacca. Consequently, it makes sense for the Quad to focus upon the Bay of Bengal.

The US Navy is of course a behemoth with a combined deck capacity being over twice that of all other nations combined. Australia and Japan too are force multipliers that are looking at developing hypersonic missiles which will be real game-changers in futuristic warfare.