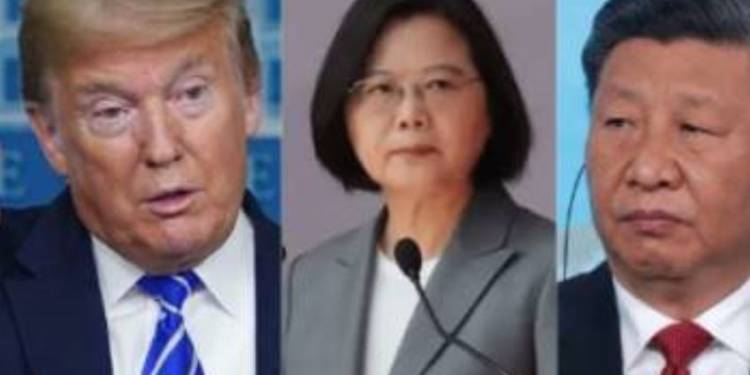 Chinese belligerence in the South China Sea and its brutal enforcement of the National Security Law over Hong Kong has been an indication for the free world about the times to come. If the CCP can bypass Hong Kong’s legislature and impose a draconian law upon a free people, there is no stopping Chinese forces from invading a free and democratic Taiwan, and ‘unifying’ it with the Communist mainland. As such, the Republic of China, also called Taiwan, needs to be prepared for all eventualities. And helping the democratic island defend itself is the Trump-led United States of America.

In the same line, the United States has now approved a $620 million upgrade or recertification package for Patriot surface-to-air missiles to Taiwan, the State Department said. This will be Taiwan’s latest purchase from the United States to deal with a rising threat from China, Reuters reported. According to a press release from the Defense Security Cooperation Agency (DSCA), the recertification package includes replacement of PAC-3 components that are close to expiration; test and repair of missile capabilities, including Stockpile Reliability Testing (SRT); spare parts for ground support equipment, and other logistical support. The primary contractor for the sale will be Lockheed Martin.

The Patriot surface-to-air missiles are what many consider the S-400 Triumph of the US, although the latter is obviously a much more lethal system. The PAC-3 is the most advanced model, with a maximum interception range of 70 kilometres, and maximum interception altitude of over 24 kilometres. The search range of its radar is 100 kilometres, and it can track 100 targets at the same time.

According to Lockheed Martin, the PAC-3 is capable of intercepting tactical ballistic missiles, cruise missiles and aircrafts and destroying them in-flight.

The system forms a crucial part of Taiwan’s defence infrastructure, and although the Chinese do not admit to it openly but the PAC-3 missile system can derail the PLA’s aims at invading Taiwan aerially. The go-ahead for the upgradation of the missile system by the US comes in the backdrop of China behaving in an extremely belligerent nature throughout its neighbourhood, whether it be the Himalayas, the South China Sea or the East China Sea. It is also laying claim over Vladivostok, which is Russian territory.

Only in May this year, the US State Department had approved the sale of 18 MK-48 Mod6 Advanced Technology Heavy Weight Torpedoes and related equipment for an estimated $180 million to Taiwan. These torpedoes could also prove to come in handy for Taiwanese forces to dissuade China from attempting naval strikes to ‘unify’ the sovereign island nation with the mainland.

The US has been Taiwan’s most important, and perhaps the largest military partner. The Taiwan Relations Act mandates the US to provide Taiwan with necessary military infrastructure and wherewithal to defend itself in the face of military aggression by the People’s Republic of China. Although the United States is not compelled to join forces with Taiwan to reply to a Chinese invasion, it is more of an unsaid rule that the US will have to get involved, as Taiwan alone, owing to the sheer numerical asymmetry, will not be able to stand a Chinese invasion on its own.

Moreover, if and when China invades Taiwan, the equations for the entire Indo-Pacific will stand radically changed, and there will be no stopping China from asserting itself even more aggressively in the South China Sea. And that, the US cannot afford. For so long the US wants to lead the free world order, it cannot possibly let China take control over 90 per cent of the South China Sea.

A U.S. C-40A, a military version of the Boeing 737, entered Taiwan air space with permission, though it did not land at any of Taiwan’s airports, Taiwan’s Defence Ministry had said last month. This was a clear signal to China, that American fighter jets can and will fly over Taiwan when need be. China was infuriated due to the same, and had said that the US aircraft “harmed our sovereignty, security and development rights, and contravened international law and the basic norms of international relations”.

Meanwhile, Hu Xijin, editor of CCP tabloid Global Times had quite the meltdown upon receiving news of US going ahead with the PAC-3 missile system upgradation for China. He said, “PLA is fully capable of destroying all of Taiwan’s military installations within a few hours, before seizing the island shortly after. Chinese army & people have such self-confidence. At the same time, we strongly support maintaining peace. Sparking a conflict should be avoided.”

PLA is fully capable of destroying all of Taiwan's military installations within a few hours, before seizing the island shortly after. Chinese army & people have such self-confidence. At the same time, we strongly support maintaining peace. Sparking a conflict should be avoided. pic.twitter.com/2LJq9Vmd93

Last year, the US had cleared the sale of 66 F-16 fighter aircrafts worth $8 billion to Taiwan. In July of the same year, the Trump administration had approved the sale of 108 M1A2T Abrams tanks, 250 stinger missiles and other equipment, with an estimated price tag exceeding $2 billion. Meanwhile, Trump signing the TAIPEI Act in March, thereby paving the way for sanctions on any nation which tries to act as a proxy state of China and destroy its relations with Taiwan, had greatly irked the Jinping regime.

Taiwan is preparing itself, with help from the United States, for a Chinese invasion upon its sovereign land which is bound to happen someday. A military offensive by China against Taiwan is not really a question of if, rather that of when. As such, Taiwan must prepare itself for all eventualities, and build a military which can take on China with absolute confidence.